NiceHash has confirmed that they have had a security breach and all mining operations have been shut down. The NiceHash website is also in ‘maintenance’ mode for the time being. offline. It looks like a large amount of Bitcoin was taken and the employees over at NiceHash are stilling trying to figure out what happened and how much was taken. This confirms the fears that many had and it looks like around $60 million in Bitcoin has been stolen. 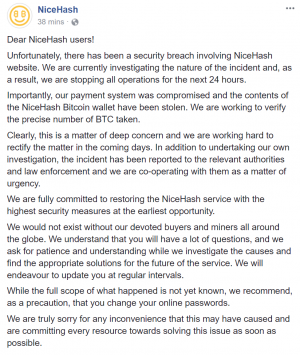