Editor’s Note – This article was written by a Laclede’s LAN Staff member who is also a long time member of the Legit Forums.  Legit Reviews was unable to attend this Chairty LAN since we were out of state for BlizzCon 2005.

With one old cheese-product factory, a dedicated and skilled staff, plenty of help from Ranken Technical College, and a healthy dose of Domino’s pizza, Ranken and Laclede’s LAN have successfully run what could be one of the most original St. Louis charity events in recent history. The Katrina Relief LAN was held on October 29th and raised over $2000 for the victims of the Katrina disaster in New Orleans. With an attendance of 58 generous gamers, who either paid 15$ by credit card or 20$ at the door (some even giving more than the required twenty dollars), the LAN was a great success. 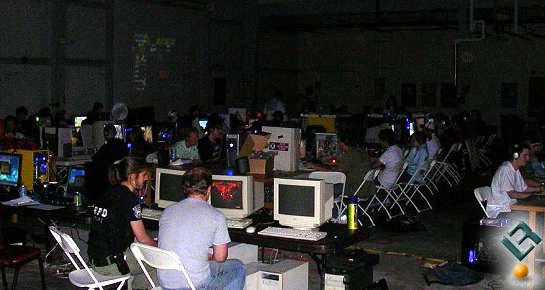 ?Laclede?s LAN is St. Louis?s gateway to gaming? says staff member Adam Kruger, ?and I feel that that statement truly captures our dedication to both the St. Louis gaming community and to hosting great events.? Laclede?s LAN, with a current staff of eight, has been hosting LAN parties for the last 2 years, continually progressing in attendance, tournaments, and enjoyment. “Simply put, we’re a St. Louis-based LAN party group dedicated to cultivating and networking the gaming community here in our city,” explains Tony DiPietri, a staff member of Laclede’s LAN. “Our goal has always been to host events that emphasize fun and group atmosphere, and all our events reflect that in some way. We do all that while running tournaments and servers for the latest PC games, so we’re a full-fledged LAN in that respect. We believe very strongly that the ‘party’ needs to go back into ‘LAN party’.”

Laclede’s LAN events in the past have not been for charity, but this event came at just the right time. “We saw an opportunity with the Katrina disaster to help people with the resources we have. Gamers are usually portrayed as an antisocial branch of society, uninterested in anything outside of the virtual worlds they enjoy. Recently, they’ve even been branded as budding criminals because of the controversy surrounding people who go out and kill someone and then say a game made them do it. We felt that a charity event centered around gaming was something that would be beneficial not only to the Katrina victims, but also to the gamers who know that they’re having a good time for a good cause. I think that it really adds a lot to the LAN when people know that all the fun they have really amounts to something good.”

The planning, equipment gathering, and general setup for the LAN took about a month, which according to the LL staff is about half what they normally allow themselves. “We were able to get this event set up and ready to go really quickly with the help of the Ranken staff and are thankful to them for all their help,” DiPietri said.