CrystalDiskMark is a small benchmark utility for drives and enables rapid measurement of sequential and random read/write speeds. Note that CDM only supports Native Command Queuing (NCQ) with a queue depth of 32 (as noted) for the last listed benchmark score. We ran this benchmark with the default settings, so you can download it and easily run a speed test on your drive at home to see where you are at with what you already own. 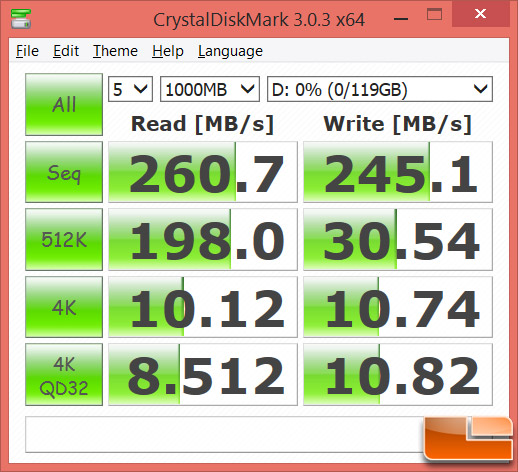 Benchmark Results: CrystalDiskMark showed that we hitting 260.7MB/s read and 245.1MB/s write on the sequential tests! SanDisk rates this drive as having up to 260MB/s read speeds and 240MB/s write speeds, so we are able to confirm those speed ratings using this particular benchmark. This also happens to be the exact benchmark that SanDisk uses to speed rate their products.

ATTO is one of the oldest drive benchmarks still being used today and is still very relevant.. ATTO measures transfers across a specific volume length. It measures raw transfer rates for both reads and writes and places the data into graphs that can be very easily interpreted. The benchmark test was performed with the default runs of 0.5kb through 8192kb transfer sizes with the total length being 256mb. 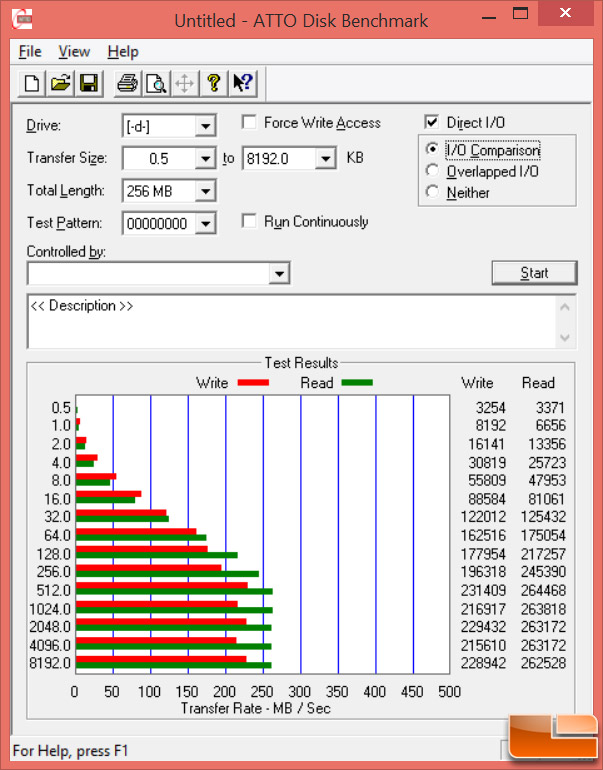 Benchmark Results: ATTO showed that we were hitting 264.5MB/s read and 231.4MB/s write on the sequential tests with the SanDisk Extreme Pro 128GB USB 3.0 Flash Drive. These are again solid scores and are among the fastest write scores that we have ever seen on a normal USB 3.0 Flash drive!

TeraCopy 2.3  is a compact program designed to copy and move files at the maximum possible speed and features a timer that works great for review purposes as we can easily show you time differences between different file transfer scenarios. TeraCopy also uses dynamically adjusted buffers to reduce seek times and has asynchronous copy speeds up file transfer between two physical hard drives.

We recently moved over 6.63GB of pictures and movies that we shot on our Canon 70D SLR camera during a recent retirement ceremony from our ASUS UX31A Zenbook that runs Windows 8.1 to the SanDisk Extreme Pro USB Flash Drive. We wanted to see how long it would take to move that folder to the USB 3.0 drive and then back to the Ultrabook. There are 81 files in this folder and include just pictures and movies. Some of the pictures were edited, but the vast majority were not. This is a very real usage scenario, so we can’t wait to see how the drive performs! 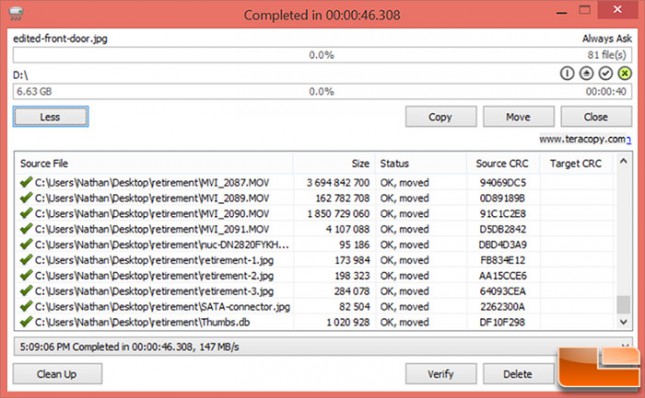 We started out by moving the ~6.6GB folder from our desktop to the SanDisk Extreme Pro 128GB USB 3.0 Flash drive and found that it took 46 seconds and it looks like we averaged 147MB/s during the data transfer. 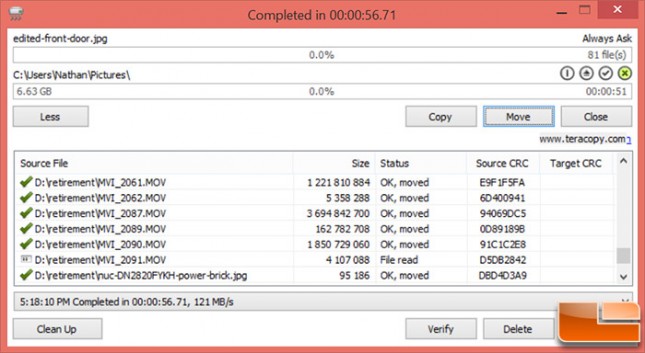 To move the data back over to the Ultrabook we found that it took 56 seconds at 121MB/s. This is a little longer, but the bottleneck might have been caused by the ASUS UX31A as the internal SSD in our particular model was found to have 440MB/s read speeds and 178MB/s write speeds according to CrystalDiskMark. So, if you are looking at getting this drive you might want to make sure your systems storage drive won’t be holding back your performance!