Last month SanDisk Corporation announced the USB 3.0-enabled SanDisk Extreme USB flash drive series. This launch managed to grab our attention as this USB Flash drive is the fastest ever announced by the company. With read speeds of up to 190MB/s and write speeds of up to 170MB/s who wouldn’t want one of these speed demons? SanDisk says that when using these drives on a USB 3.0 interface that you can transfer smaller files almost instantaneously and larger files such as a 3GB file in 20 seconds or a 40GB file in four minutes!

The SanDisk Extreme USB 3.0 Flash Drive series is available in 16GB, 32GB and 64GB capacities under the part number SDCZ80. When these drives were announced last month they were carrying MSRPs of $64.99 to $159.99. We were shocked to see just a month later that the street prices were $29.71 to $83.33 and that includes shipping! For this review we were sent the 64GB SDCZ80-064G model, so that is the drive we will be using for testing. 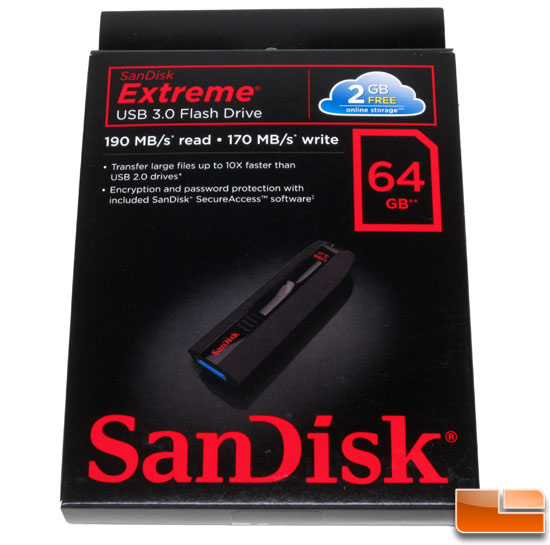 The SanDisk Extreme USB 3.0 Flash Drive that we received comes in enclosed in a card board retail box with an inner clam shell packaging that needs to be cut open. TheSanDisk Extreme USB 3.0 Flash Drive was built with the latest flash memory technology and was designed from the ground up to be a performance oriented product. If you are looking for a way to move and store HD videos, high-resolution photos, and other bulky files this drive is right for you. 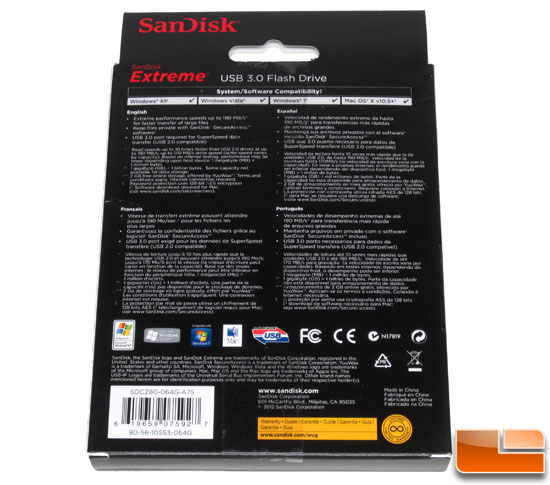 The back of the packaging shows the Flash drive is compatible with Windows 7, Vista and XP along with Mac OS X v10.5+. It also mentions the basic features and how the drive has a limited lifetime warranty in four different languages. 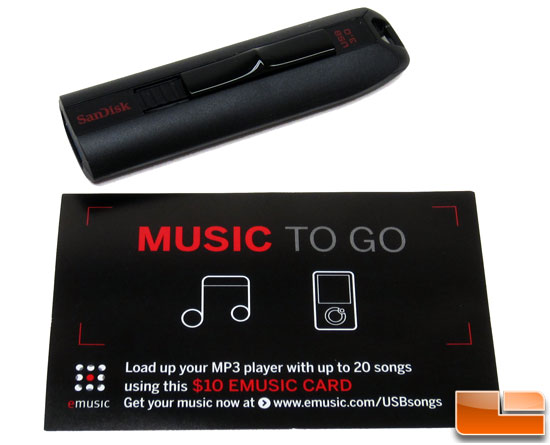 Inside the retail packaging you’ll find the drive and a $10 music credit to eMusic. We were a little shocked to see that no lanyard or instructions were included, but they are not needed. As you can see this is a slider style USB drive, so when not in use the USB 3.0 connector is retracted inside the plastic housing. When you want to use the drive you simply use your thumb to slide out the drive. There is no cap to get lost with this drive! 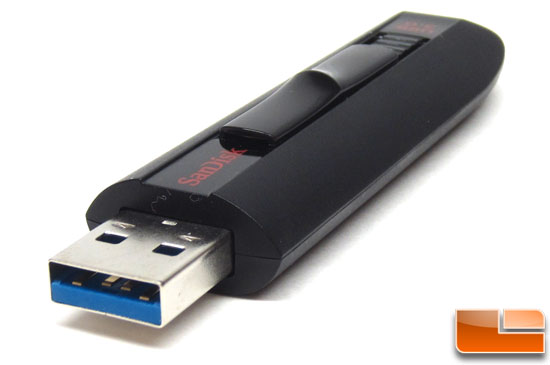 The SanDisk Extreme Flash Drive has a blue activity LED light in the end of it that flashes when transferring data and remains off when not being actively used. The light remains the same color whether it is on a USB 2.0 port or USB 3.0 port. The picture above gives you a good look at the USB 3.0 header that is the traditional blue color.

Flipping the drive over you see that SanDisk went with the product name, capacity, part number, serial number, country of origin and other information. The SanDisk Extreme USB 3.0 drive does have a hole in it for a key chain or lanyard  so you won’t sit it someplace and lose it.

Now that we know the basics of this drive we can move on to taking a look at the software that comes on it and our test system.