Samsung has published a list of their products that have won CES 2018 Innovation Awards. Some of the items on the list are already existing products like the Galaxy Note8, Galaxy S8 and Galaxy S8+, but others are for upcoming products that many may not have seen or heard of before.

The first thing that caught our attention on the press release was that Samsung has 16Gb GDDR6 memory developed that is clocked at a mind numbing 16 GBps. That is double the speed of the most recent GDDR5 chips used on something like say the NVIDIA GeForce GTX 1070 Ti that was just released this month. Even the GDDR5X that we are using on high-end graphics cards like the GeForce GTX 1080 and GTX 1080 ti are doing around 10-11 Gbps.  During Hot Chips, Samsung said to expect 14 Gbps from GDDR6 memory chips when it begins mass production of the new graphics RAM in 2018. It will be interesting to hear if that is still the case or if they have had a speed breakthrough and will be ramping up speeds much quicker than first thought. The good news for PC gamers is that it looks like GDDR6 will have no problems picking up where GDDR5X is going to end and that is great news for GDDR as it appears to be much more cost effective than HMB2 right now. It really makes one think if AMD moving to HBM and HBM2 memory so quickly was really the right move as NVIDIA has managed to do quite will with GDDR5 and GDDR5X over the past couple years. Now with GDDR6 rolling out next year we can’t wait to see what memory direction NVIDIA and AMD will move on their next-generation products.

Samsung 16Gb GDDR6 Memory – The fastest and lowest-power DRAM for next generation, graphics-intensive applications. It processes images and video at 16Gbps with 64GB/s data I/O bandwidth, which is equivalent to transferring approximately 12 full-HD DVDs (5GB equivalent) per second. The new DRAM can operate at 1.35 volts, offering further advantages over today’s graphics memory that uses 1.5V at only 8Gbps. 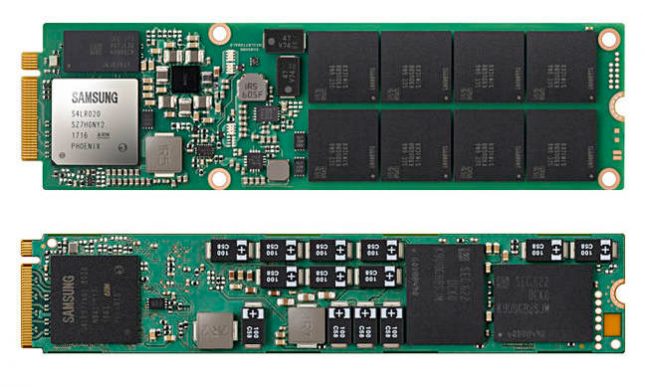 The other item that caught our attention was an 8TB NGSFF NVMe SSD. Samsung has been sampling the industry’s first NGSFF SSD for some time now and hopes to dramatically improve the performance of 1U rack servers. The NGSFF drives measure in at 30.5mm x 110mm x 4.38mm, which is obviously larger than the M.2 format that is usually just 22mm wide and 80mm in length.  By having a slightly wider module they can run two sets of NAND Flash and greatly increase the storage capacities for servers. The cloud server market is booming right now, so having fast high-capacity drives is crucial.