To benchmark the Samsung Portable SSD X5 1TB Thunderbolt 3 drive we’ll be using CrystalDiskMark, ATTO Disk Benchmark, Anvil’s Storage Utilities, AS SSD, AJA System Test, and a manual file transfer test. These six benchmarks should paint a good overall picture of how this portable SSD performs, so you know what kind of performance to expect before making a purchase that could be upwards of $1000. 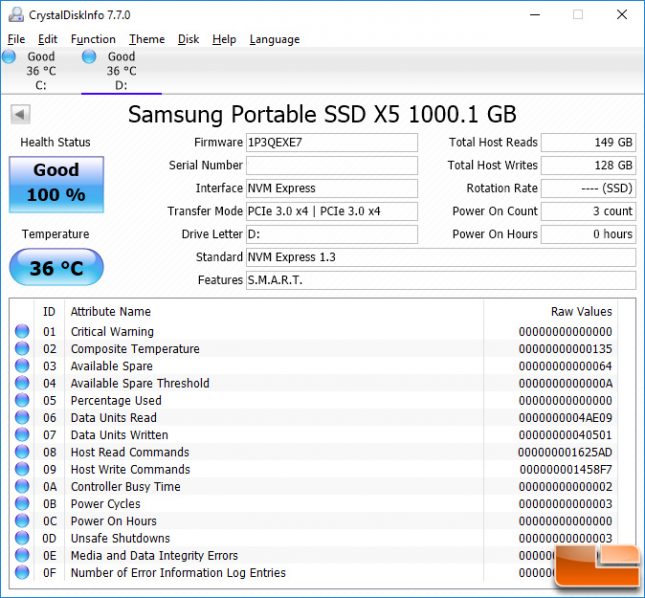 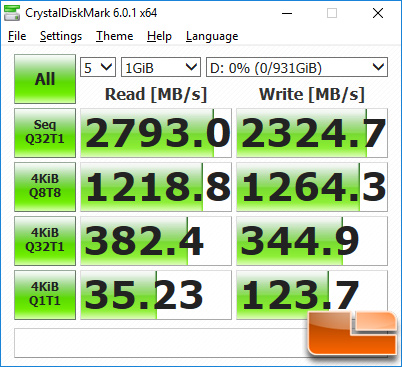 When it comes to sequential read/write performance we topped out at 2793 MB/s read and 2325 MB/s write on the 1TB model that we tested. Not bad and this is very close to the X5’s rated speeds of 2800 MB/s read and 2300 MB/s write for the 1TB capacity model drive that we are testing today. 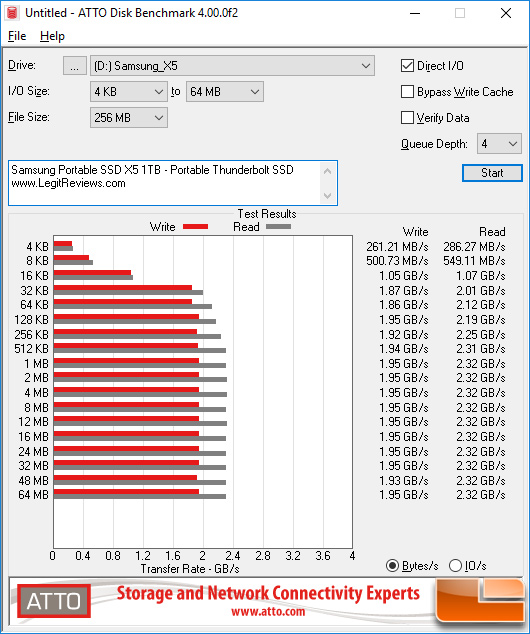 ATTO Disk Benchmark showed that we were getting up to 2.32 GB/s read and 1.95 GB/s write speeds on the X5 1TB drive through the Thunderbolt 3 port on our desktop test system. This is lower than what we saw on CrystalDiskMark, but still amazing scores for a portable drive. 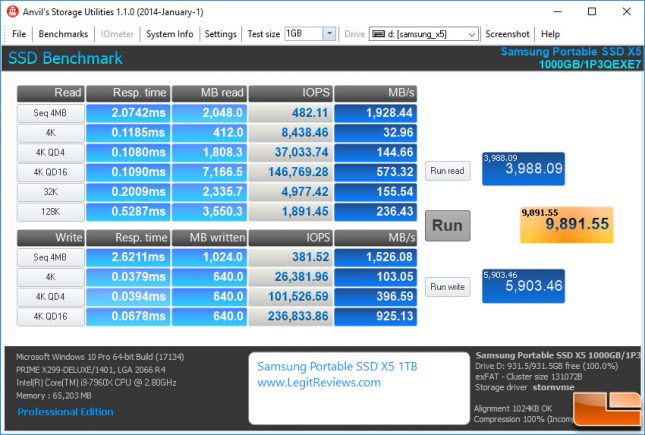 Anvil’s Storage Utilities benchmark finished with an overall score of 9,891.55 points on the Samsung Portable SSD X5 1TB portable SSD. This score was taken after we went into Windows Device Manage and disabled Windows write-cache buffer flushing under the drive properties. 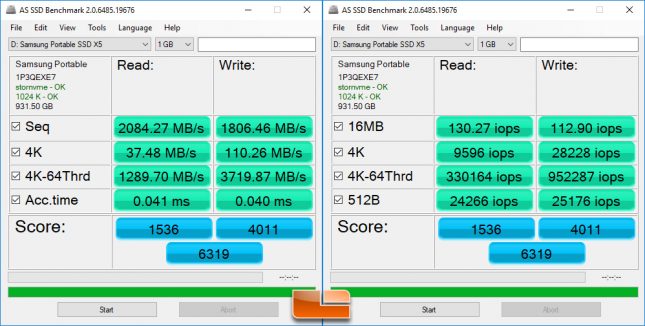 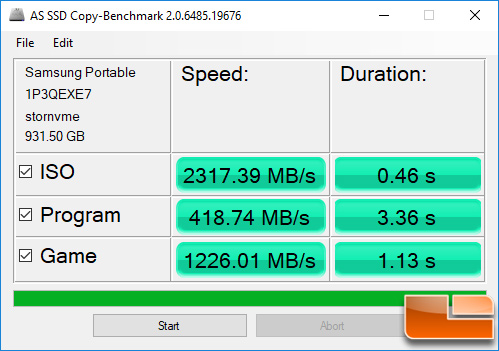 In AS SSD we managed to get an overall score o f 6,319 and topped out at 2084 MB/s read and 1806 MB/s write on the sequential file transfer test. The Random 4K performance numbers are solid and AS SSD showed that we were hitting over 950,000 IOPS in the 4K-64Thrd write test! The AS SSD Copy-Benchmark gave solid scores on the ISO and Game workloads, but the Program test was abnormally low for some reason.

AJA System Test by AJA Video Systems measures system disk performance using video test files of different resolutions, sizes and codecs. We selected the standard 4K UltraHD resolution, a test file size of 1GB and the ProRes 4444 codec to see how this drive does with regard to video rendering performance. ProRes 4444 is used for heavy effects work and deep color projects. FPS is very important for this market as well as MB/s, so we’ll be talking about both FPS and MB/s performance here. The first lets the editor know whether they are going to be able to make their 60p project work for instance. The second they value for understanding rendering expectations, throughput, file read/write expectations for transfers and that kind of thing. 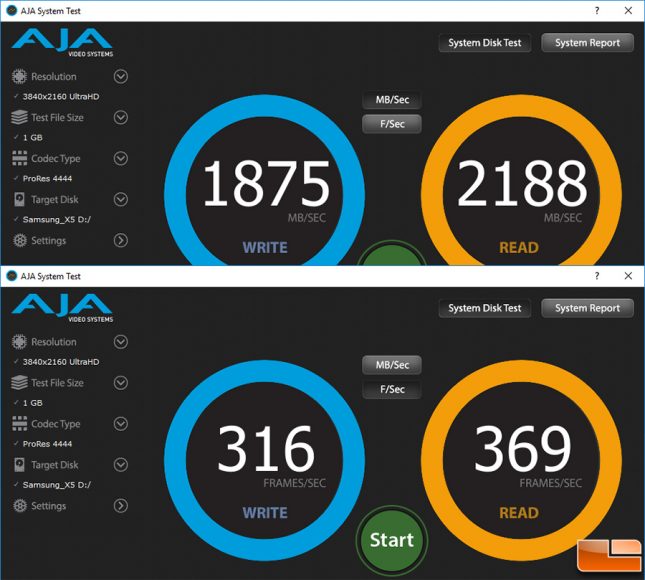 We we able to get 2188 MB/s read and 1875 MB/s write from the Samsung Portable SSD X5 1TB drive on this benchmark test scenario. This translates to 369 Frames Per Second (FPS) on read and 316 FPS on write! Impressive speed when dealing with a 1GB 4K movie file!

We wanted to do some real world file transfers, so we copied over few MKV Full-HD movie that added up to almost 6GB. During the transfer we found that we were getting around 815 MB/s on average when the data was being written to the drive. 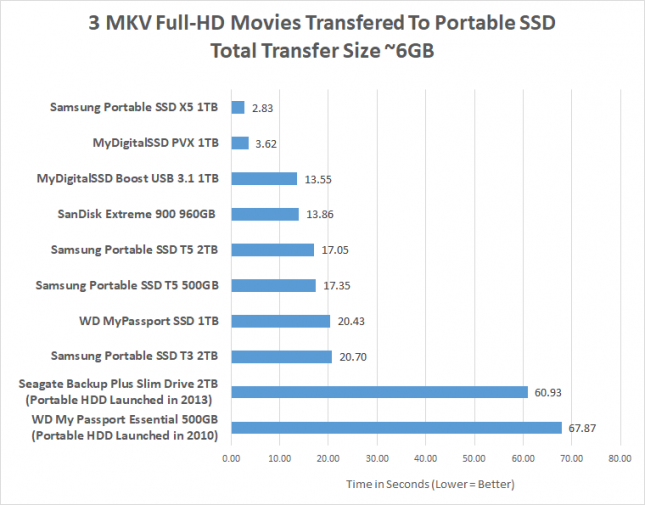 It took just 2.83 seconds to transfer the three movies over from our PCIe NVMe SSD to the Samsung Portable SSD X5 1TB drive. That means we were cooking along at over 2 GB/s and this is by far the fastest solution that we have tested. That means we are able to transfer a movie in less than second, which is amazing. The Samsung SSD T3 2TB drive that was released in 2016 took 20.70 seconds to complete the same exact file transfer, so we are seeing nearly a 7x performance improvement in just two years. If you look at older portable USB 3.0 hard drives like the popular WD My Passport Essential 500GB that came out in 2010 then you are going to see massive performance differences. We saw a 24x improvement in speed going from the WD My Passport Essential 500GB to the Samsung Portable SSD X5 1TB. That is a huge difference and shows how the Thunderbolt 3 interface is top dog when it comes to storage interfaces for portable drives.