Samsung is no stranger to the portable SSD market and this week they introduced a new model called the Portable SSD T7 Touch. This external storage drive brings a number improvements over the Portable SSD T5 that was introduced back in 2017. For the first time, a built-in fingerprint sensor for improved security has been added to the enclosure. Samsung has also moved from SATA to PCIe NVMe technology to allow for over 1 GB/s speeds over the drives USB 3.2 Gen2 interface.

With a sequential read speed of 1,050 MB/s and a write speed of 1,000 MB/s, the T7 Touch is almost twice as fast as as its predecessor, the T5. This significant speed boost is most welcomed as it will help minimize the wait time that comes when transferring data from one device to another. Consumers always want products that offer better quality of life and Samsung appears to be delivering that with better security and speed.

Available in a black or silver finish, the T7 touch is offered in 500GB, 1TB and 2TB sizes with pricing of $129.99 on the 500GB model and $229.99 on the 1TB drive. The 2TB model is not widely available just yet, but should be on store shelves in the weeks ahead for $399.99. These prices do come in above the existing Samsung T5 Portable SSD series, so the enhancements do come at a price premium. The Samsung T5 Portable SSD boasts Read/Write speeds of up to 540 MB/s without fingerprint recognition technology for $89.99 in 500GB trim and $168.94 for the 1TB model. The good news is that if you don’t need the fingerprint sensor, Samsung will be introducing the Portable SSD T7 in Q2 2020 at lower price points.

The model that we were sent out to review was the Samsung T7 Touch Portable SSD in black (part number MU-PC500K/WW). All Samsung T7 Touch series drives are backed by a 3-year limited warranty and there is no limitation in place on the lifetime drive writes. 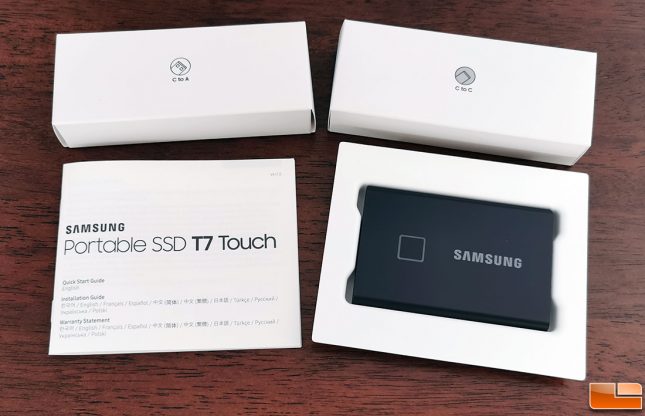 Inside the T7 Touch packaging you’ll find the drive, Type-C to Type-C USB cable (10Gb/s), Type-C to USB-A cable (5Gb/s) and a quick-start guide. The dimensions of the T7 Touch are 85 mm x 57 mm x 8.0 mm with a weight of 58 grams excluding cables. That makes it about the size of a credit card, thus ensuring it will fit in any pocket, purse or bag you can think of. 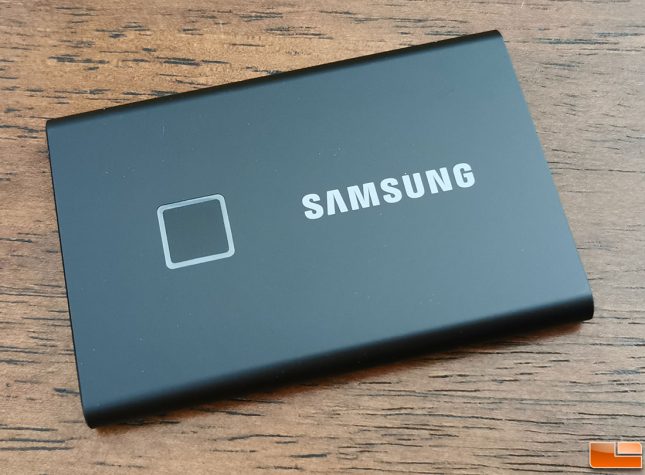 The T7 Touch comes in a solid anodized aluminum enclosure that looks good and is very tough. Samsung says this design is very durable and claims it can withstand drops of up to two meters (6.6 feet) in their internal free fall shock test. There is no IP (Ingress Protection) dust or water rating on the T7 Touch series.

With fingerprint sensor is clearly visible on the front of the drive and can recognize up to four fingerprints. Why not just one fingerprint? Well, if you share the drive at work or at home you might need to allow multiple users to access the drive. If you are a secret agent you’ll want to scan in multiple fingers on both hands in case you get a couple fingers hacked off by a the cruel enforcer of a rouge nation. You’ll know if your fingerprint worked as the LED light ring around the sensor indicates if the device is locked or unlocked. 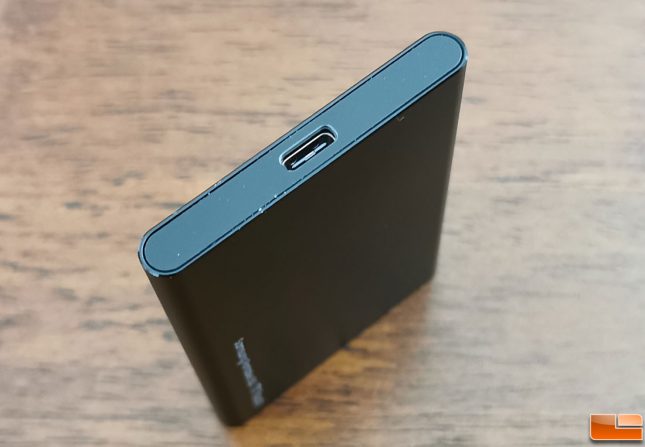 The only other port on the USB 3.2 Gen 2 Type-C port on one end of the T7 Touch. To reach maximum read/write speeds of up to 1,050/1,000 MB/s, respectively, the host device and connection cables must support USB 3.2Gen 2 and the UASP mode must be enabled. The good news is that the T7 Touch is compatible with USB 3.0 and USB 2.0 devices, albeit at slower speeds. 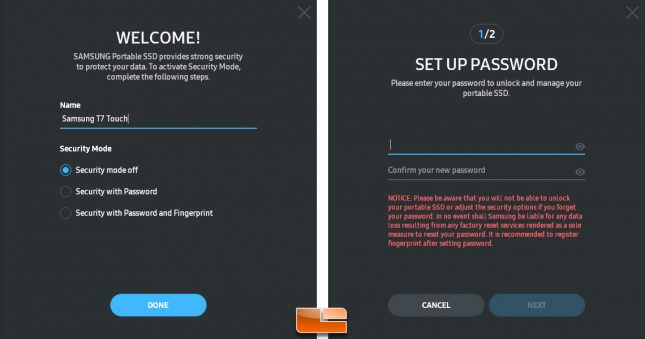 If you plan on using the Samsung Portable T7 Touch on your Android device you’ll need to download the Samsung PSSD app here. 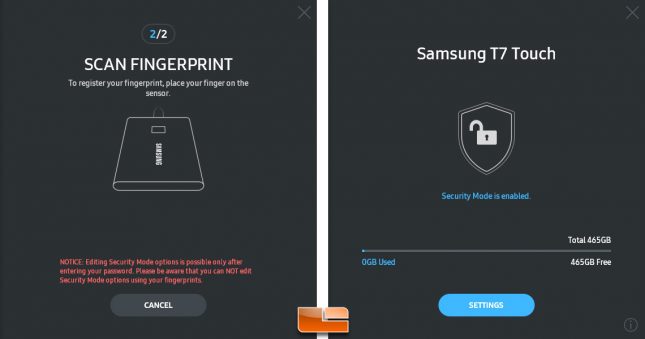 The setup is extremely simple and after setting the device name, password and fingerprint you are pretty much done. The neat thing about the T7 Touch is that the fingerprint scanner works even when it is connected to devices that do not support Samsungs Portable SSD software. So, you can plug it into your favorite TV or gaming console and unlock it by just using the fingerprint scanner on the front of the metal enclosure. So, you do not need the companion software to access the drive if you have stored a fingerprint in the T7 Touch.

On the next page we’ll start actually speed testing the T7 Touch!