Samsung released its 870 QVO SATA SSD today, which is drive makers second-generation QLC V-NAND Flash drive, building on the success of the 860 QVO series that came out at the end of 2018. The 2.5-inch form factor might be old news for enthusiasts, but millions of users are upgrading older systems and buying up larger SATA 2.5″ drives for the SATA 6Gbps interface. So, so we were happy to learn that Samsung was sending over the 870 QVO for review. 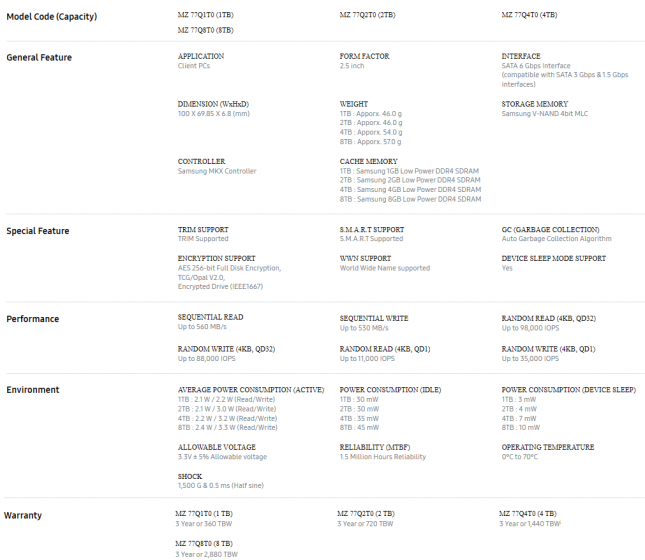 Performance on all of the drives are the same with ratings of up to 560/530 MB/s for sequential Read/Write speeds and up to 98K/88K IOPS for Random 4K QD32 Read/Write speeds. These speeds were achieved by pairing the latest Samsung V5 9x-layer V-NAND (QLC) with Samsung’s brand new MKX controller. Please ignore the speeds on the retail packaging below as it is incorrect! 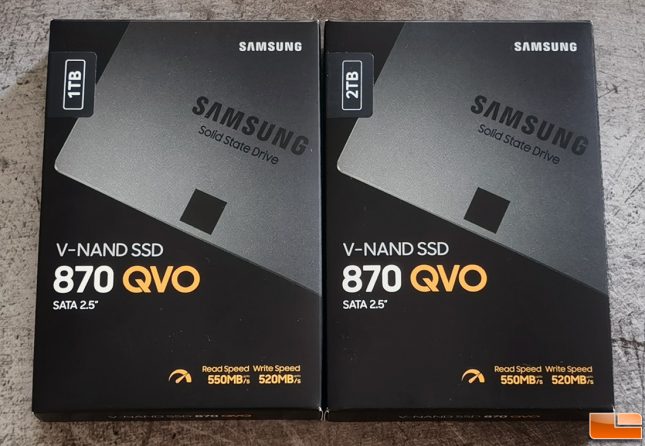 We were sent the 1TB and 2TB models to review. 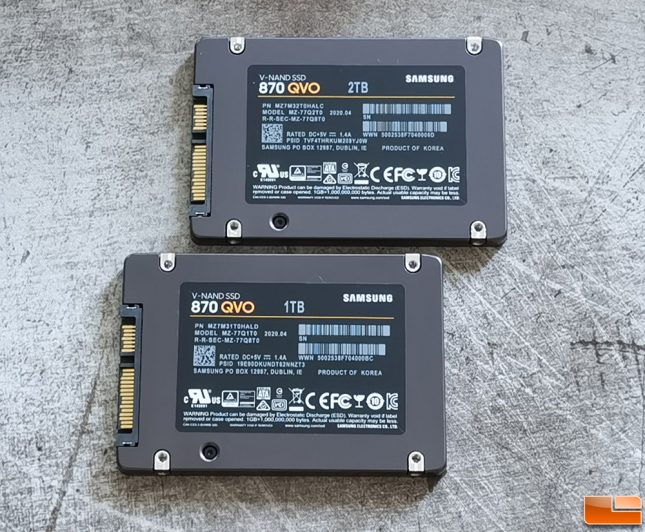 Let’s get straight to testing on our usual AMD Ryzen powered test system!

SATA III SSDs has been a ‘dead’ interface for a number of years now as we have reached peak throughput for sequential Read/Write operations. We topped out at ~538 MB/s read and ~512 MB/s write on the brand new Samsung 870 QVO 1TB and 2TB drives, which is basically exactly the same as the Samsung 860 QVO 2TB from 2018. There is virtually no different at any I/O size with regards to sequential performance.

Samsung claims that they improved Random 4K performance improved up to 13% for QD1 operations, so we fired up CrystalDiskMark 7. The results here showed that we were able to hit both 564 MB/s sequential read and 536 MB/s sequential write on the two new 870 QVO SSDs. This beats the drives rated speeds of 560/530 MB/s and is basically the same performance that we saw from a couple years back on the 860 QVO series. 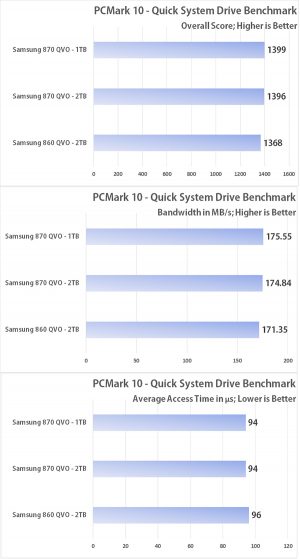 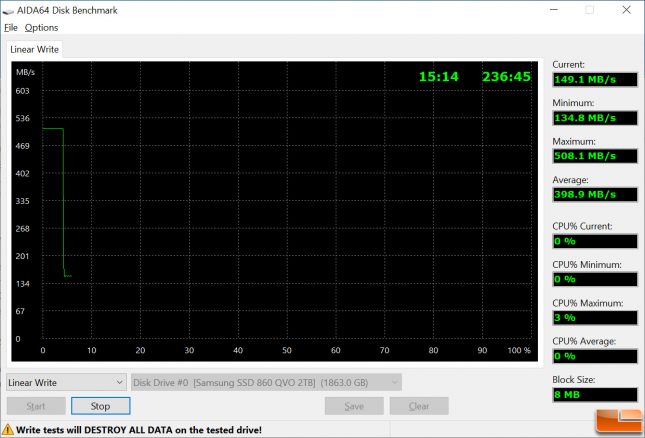 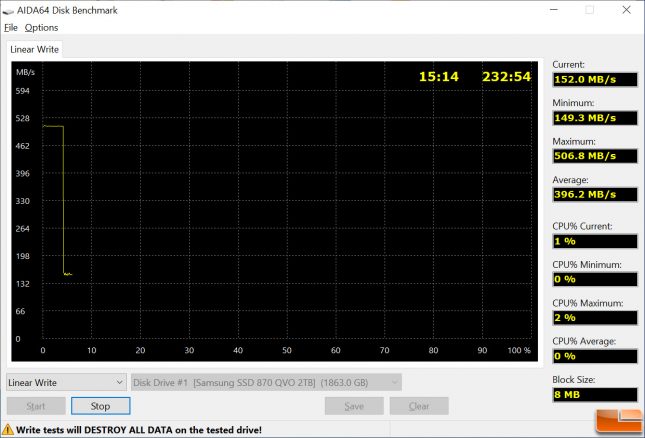 The last area that we wanted to performance check was the sustained random write performance as Samsung claims they are seeing improved performance by up to 31% on the 870 QVO series. We ran the linear write test on AIDA64 and pitted the 860 QVO 2TB against the 860 QVO 2TB.

The results were virtually the same. We did not notice any significant difference in sequential write performance measurements on these drives with Samsung Intelligent TurboWrite technology. Once the SLC Cache is filled on the 870 QVO series the sustained write speeds are rated at 80 MB/s on the 1TB drive and 160 MB/s on the larger 2-8TB drives. Our testing shows that we were getting around 150-160 MB/s on the 2TB models. 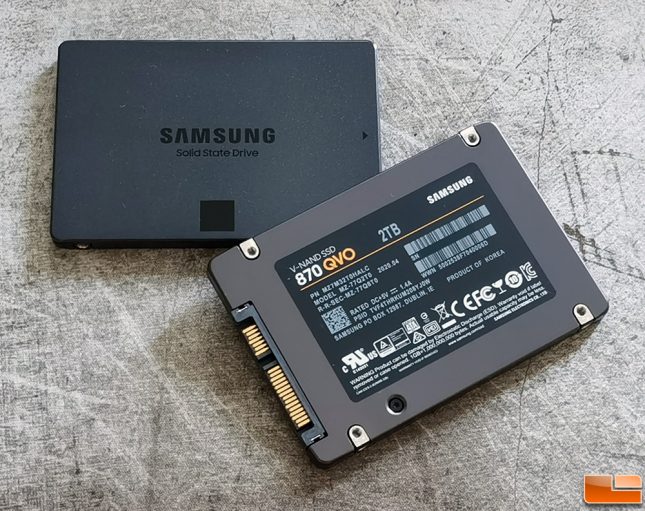 SATA SSDs aren’t nearly as interesting as they used to be, but they are ideally suited to everyday computing applications such as multi-tasking, web browsing and PC booting. The Samsung 870 QVO is certainly a minor improvement of the 860 QVO series that was released back in 2018. The largest improvement is 13% improvement in Random 4K performance at a queue depth of 1. It is also something that we were able to confirm that difference in our benchmarks! This is a direct result of Samsung moving to the newer MKX ‘Metis’ controller and their latest V5 9x-layer QLC V-NAND Flash memory.

That said, consumer SSDs have become an extremely low margin commodity and it is hard to bring anything new to the table in the SATA III market. It is great to see companies like Samsung bringing new controllers paired with the latest NAND Flash the offer to bring some improvements to this market where it is nearly impossible to stand out or differentiate one model versus another.

If you are looking for a budget friendly 2.5-inch SATA III SSD that has gobs of storage space be sure to take a look at the 870 QVO as it will work well for both a primary drive or as a secondary storage drive. Pricing will go down on this series over the next year or two and picking up a 2TB or 4TB 870 QVO for a game drive might not be out of the realm of possibilities for many!

Legit Bottom Line: SATA III SSDs might be maxed out for maximum sequential performance, but Samsung found a way to improve Random 4K performance on the 870 QVO series and keep their SATA lineup from being stagnant! 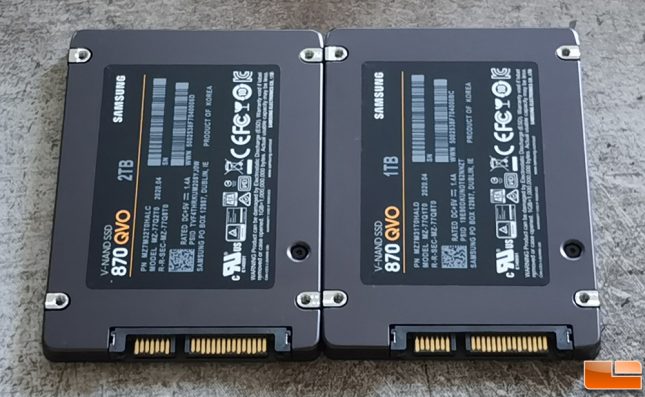