Digitimes is under the impression that Intel’s 14nm Skylake processors and 100-series chipsets for desktops are going to be unveiled at Gamescom in Germany. Gamescom takes place in the first week of August, so it appears that is when Intel could be unveiling their new platform and processors.

Intel’s 14nm Skylake processors and 100-series chipsets for desktops are expected to be unveiled in early August at Gamescom in Germany. Intel will announce the Core i7-6700K and Core i5-6600K as well as Z170 chipsets initially targeting gamers, according to sources from the upstream supply chain. Intel will then unveil its Skylake-based Core i7-6700/6700T, Core i5-6600, 6500, 6400, 6600T, 6500T and 6400T, and H170 and B150 chipsets between August 30-September 5. The H110 chipsets are scheduled to be released between September 27-October 3, the Q170 and Q150 chipsets are set for October or November. Most motherboard players will start announcing their 100-series-based motherboards on August 5. The Skylake platform adopts an LGA1151 socket design and supports DDR4 memory. Notebook versions of Skylake processors are planned for the fourth quarter of 2015 and Intel’s notebook reference design for the Skylake platform includes support for USB 3.1 Type-C ports. – Digitimes

The Intel Developer Forum for 2015 begins on August 18th and many were expecting Intel to launch the new platform at their own event. It will be intersting to see which date Intel picks to launch their new processors!

The Intel Skylake platform is highly anticipated in the enthusiast and gaming communities as it will bring the new LGA1151 socket to market for the very first time along with mainstream adoption of DDR4 memory. 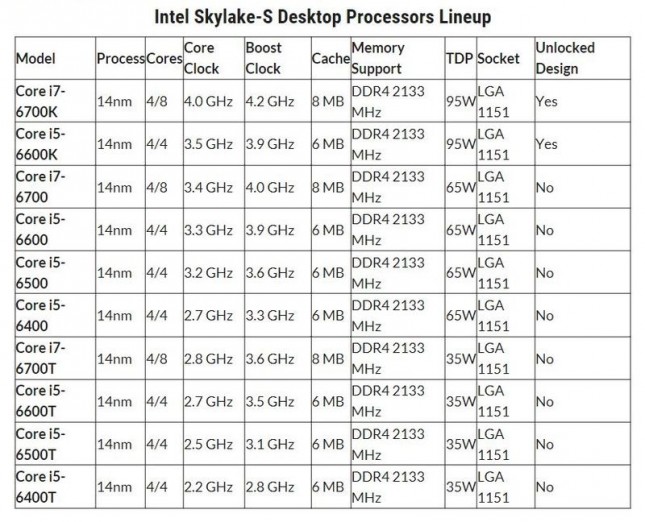