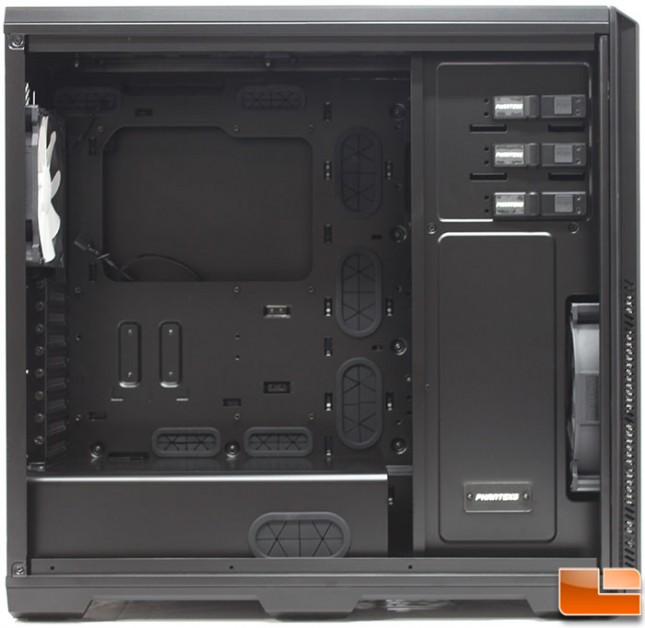 Removing the side panels is accomplished by removing two thumbscrews at the back and swinging the back edge of the panel outwards.  It is a very simple design, and is one of my favorite designs for side panels.  On the motherboard tray, there are four small cable management holes, and three large ones; each of which has a rubber grommet installed to help keep things looking great; there is also a large un-protected hole at the top of the tray; in addition, the power supply cover has an additional cable management hole.  Finally, a large hole in the motherboard tray should provide plenty of access to the back of the motherboard for installing CPU coolers. 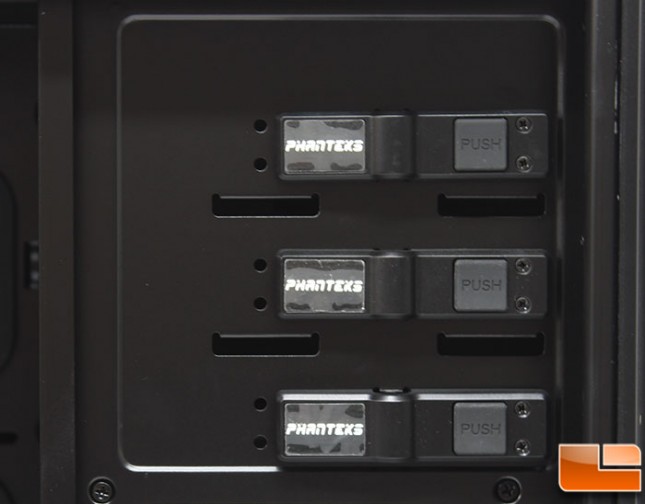 The three 5.25″ device bays are tool-less with simple push to release clips. 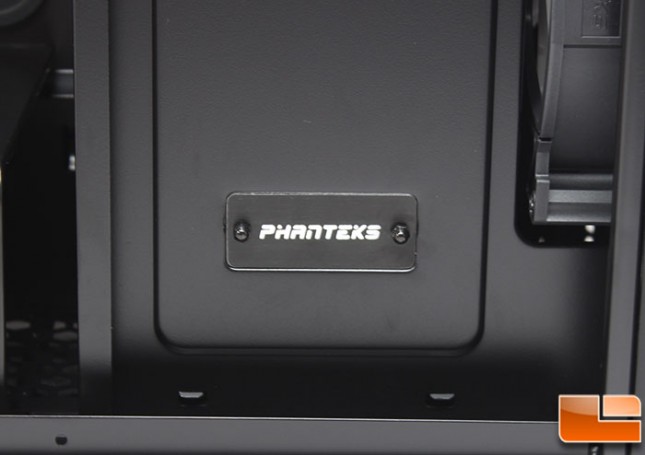 In the lower right corner, we usually find hard drives installed here.  Phanteks has gone the stealth approach to hard drives, they are all located behind this solid plate.  Here Phanteks has installed a simple name badge that can be removed by two small bolt caps.

At the bottom, we find a large cover for the power supply.  There is one large hole on the side which has a cable management rubber guard installed.  Otherwise, the end near the hard drives is open, and a small hole on the top near the motherboard tray.

The power supply cover is easily removed by three screws on the back of the motherboard tray, once it is lifted out, we can prepare to install the power supply.  An extra large cable management hole is also provided for power supply cables to go behind the tray.  There are six large rubber feet for the power supply to rest on, to reduce vibration noise.  Next to the power supply, either two 120mm fans or one 140mm can be installed, these are of course protected by the bottom fan filter. 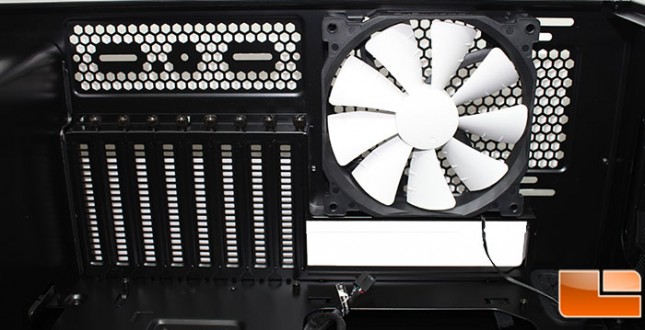 Here we have another look at the back panel.  The eight PCI expansion slot covers are held in place with thumbscrews and each of the covers is vented to assist with airflow.  If the included 140mm fan isn’t the preferred fan, it can be swapped out with either a 120mm or up to a 140mm liquid cooling radiator.

The inside view of the top panel, which does not come with any fans installed; three 120mm or 140mm fans can be installed here, or up to a 420mm liquid cooler radiator!  There is a lot of space available for cooling! 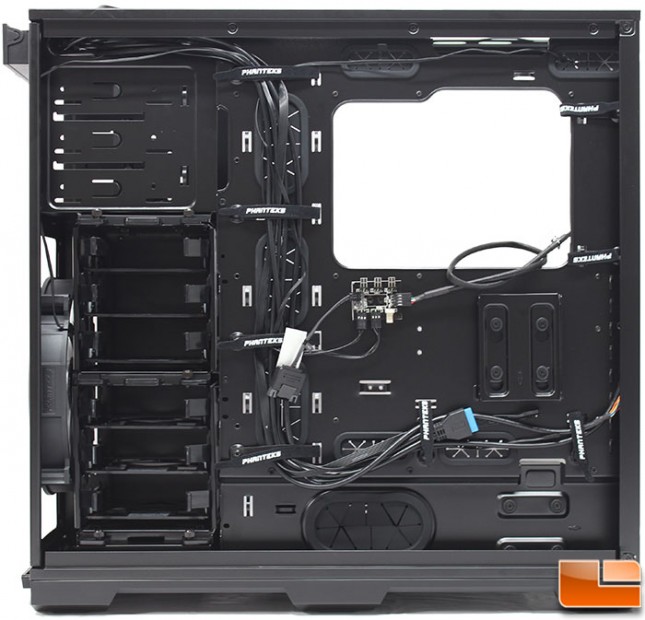 Taking a quick look at the back of the motherboard tray, we find six 3.5″ hard drive trays in two cages, which can be removed very easily.  The cable management ties that we mentioned earlier, there are a total of eight of the velcro straps, along with many other cable tie locations that are unused at the moment.  Rather than using twist-ties, Phanteks has used their straps to secure the cables, this gives users a good idea of what they can do to keep t he cables tidy. 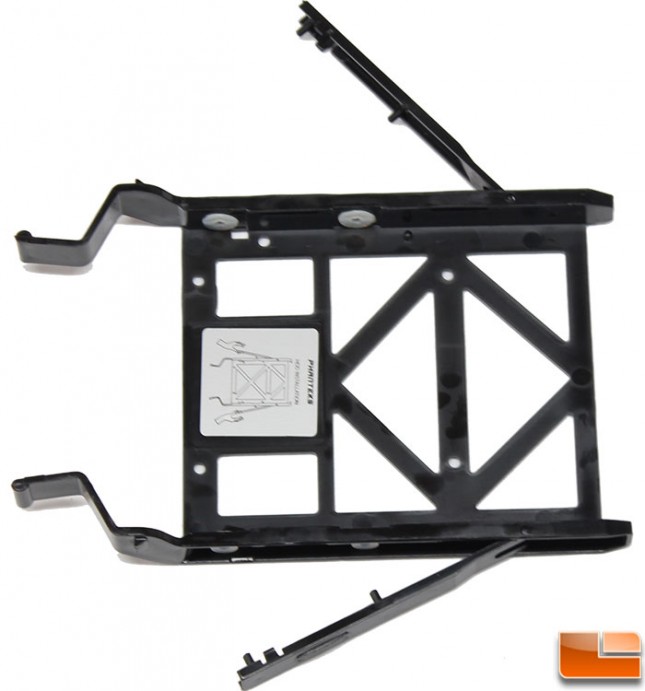 There are a total of six trays for hard drives, while they are designed for tool-less 3.5″ drive installation, 2.5″ drives can also be installed with four screws.  To install a 3.5″ drive, there are clips on the side the swing out, then the drive is put into place with two guides to make sure its in the perfect spot, then snap the clips closed. 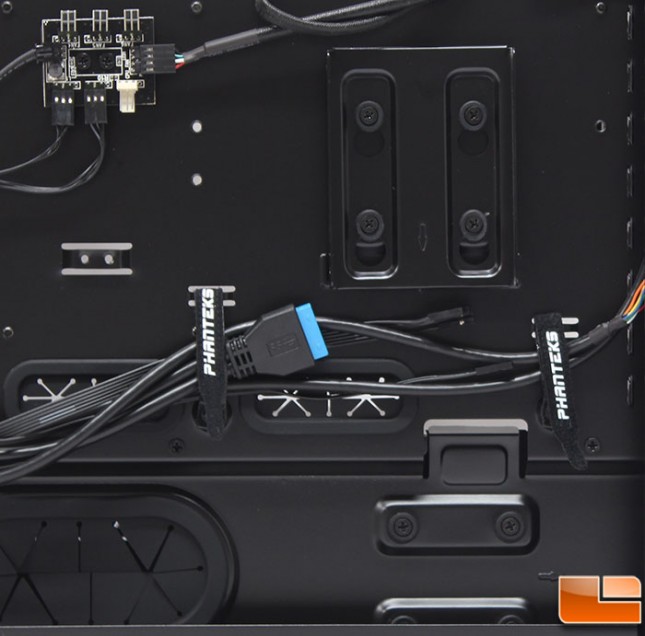