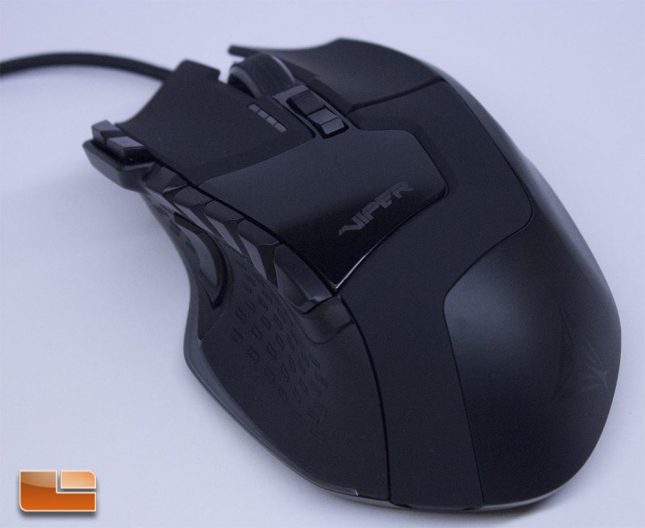 The Viper V570 RGB Blackout is a fairly large mouse, with a right handed ergonomic design that has a fairly deep thumb indent and resting area on the right side for your ring finger. Touted to be designed for MMO+FPS, but a bit heavy at 159.2 grams to be considered for competitive use by most, the Viper V570 RGB Blackout seems to be a versatile, jack-of-all-trades type of mouse. The V570 RGB Blackout has programmable lighting along the bottom left side of the mouse, in addition to programmable lighting on the scroll wheel and logo. Rather than having a uni-body shell, the V570 RGB Blackout has individual main buttons attached to Omron 10 Million Click switches, which should allow for maximum responsiveness and solid, reassuring clicks. 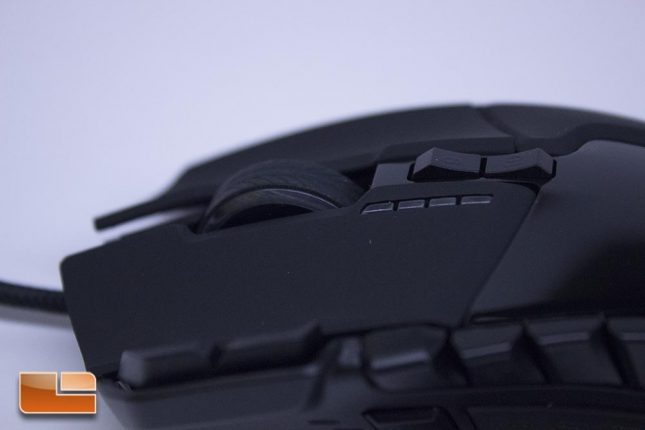 The scroll wheel on the V570 RGB Blackout offers a very satisfying click and is implemented well. A quick shake test showed a small amount of wobble from the scroll wheel, but nothing beyond normal or enough to cause concern. My shake test didn’t reveal any loose buttons or sensor rattle, the V570 RGB Blackout seems to be very solid and well manufactured. A profile toggle button sits below the scroll wheel and there is an LED indicator to tell you which profile is active, with the Viper V570 RGB Blackout capable of running five different profiles. Below the profile toggle is a CPI toggle button, which toggles between four different CPI’s, which can be set in the Viper V570 RGB Software.

There are five thumb area macro buttons on the Viper V570 RGB Blackout. These buttons can all be programmed for specific actions and this type of functionality can come in really handy in a variety of games. The side macro buttons have a decent enough feeling, but the click is somewhat muddy and doesn’t feel as satisfying or crisp as I would like. The macro buttons also have pointed edges that don’t feel so good on the finger, though I can’t say that it’s a major issue, as I was about to use the mouse for hours without comfort issue. The sniper button is easy to reach, sitting right at the end of the rubberized thumb rest area, with a groove that allows for the thumb to rest for added comfort.

The sniper button offers a decent enough click, but it has a slightly mushy feeling. The rubber area where your thumb rests is really comfortable and the grip works well without digging too much.The two buttons to the side of the left mouse button are programmed as back and forward buttons by default and this is actually a great function for them. These macro buttons offer satisfying, crisp clicks when compared to the side macro buttons. 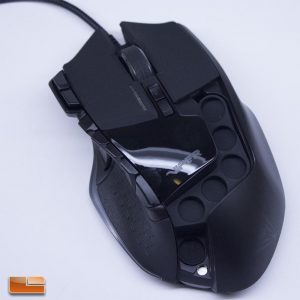 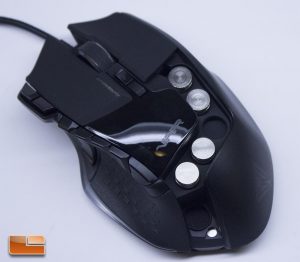 Removing the weight door of the V570 RGB Blackout Edition was simple, as it snaps in and out of place. It remains in place when in use and doesn’t shake or present any issues. 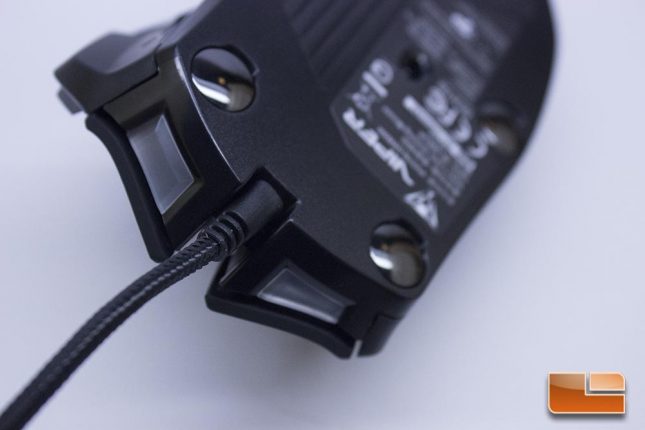 The braided USB cable of the Viper V570 RGB Blackout is about six feet long and comes out of the middle front of the mouse. The cable has a solid amount of reinforcement and the end connector keeps it clear of the mouse very well. I do think a thin rubber cable would work better in terms of maneuverability, but this is already a pretty hefty mouse and braided cables do look better. 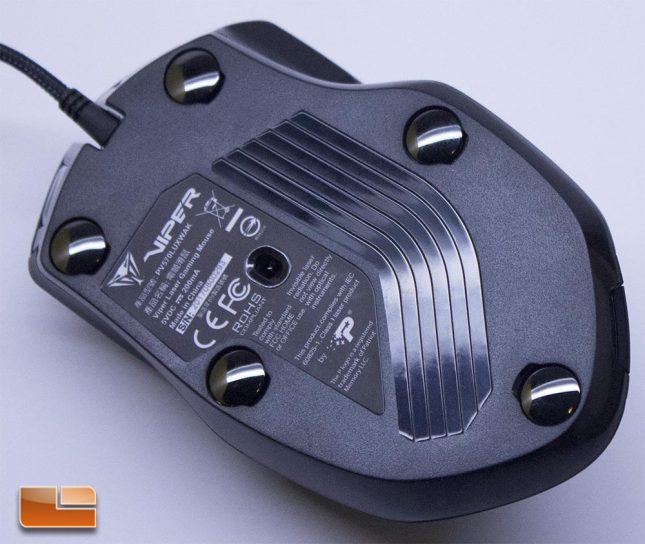 The Viper V570 RGB Blackout has five ceramic mouse feet which are spaced pretty  evenly across the bottom of the mouse, though there is just one foot anchoring the fairly wide bottom of the mouse. The ceramic feet let the mice glide very smoothly, especially on the hard surfaces of Viper’s own LED Gaming Mouse Pad and the Logitech G440 Hard Surface Mouse Pad. The Avago laser is placed slightly off-center and I didn’t notice that this caused any issues, though I did experience a couple of spin outs and I could tell the V570 RGB Blackout just doesn’t track as accurately as my Pixart 3366 and 3360-based mice when doing pixel-by-pixel testing and spin-out testing. I found the lift-off distance of the Viper V570 RGB Blackout to be about 1.5 CD’s thickness at default, so it’s totally acceptable.

When I first tried to install the Viper V570 RGB Blackout software, which is actually carried over from the Viper 570 RGB and features pictures of that mouse rather than the new V570, the latest version of Windows 10 gave me the following warning. 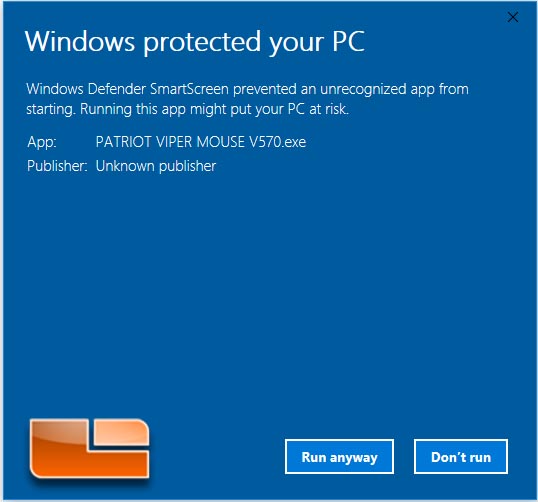 This specific warning is because Patriot hasn’t had the software qualified by Microsoft, in all likelihood. I allowed the software to run anyway and it installed without issue. Windows Defender hasn’t triggered any warnings since this one and the software runs just fine, without any odd memory or CPU usage scenarios occuring.

The software for the Viper V570 RGB Blackout Edition was pretty refined and offered a lot of options. Each of the buttons on the mouse (with exception to the left click) can be programmed to specific button presses, recorded macros, media controls and more. You can use the five different profiles to program different button configurations to suit specific games you are playing. The four different CPI settings can be set in software, but I found the default settings to be fine since I primarily game and use my desktop at around 800 DPI. The DPI on the V570 RGB Blackout Edition can be run up to 8200. 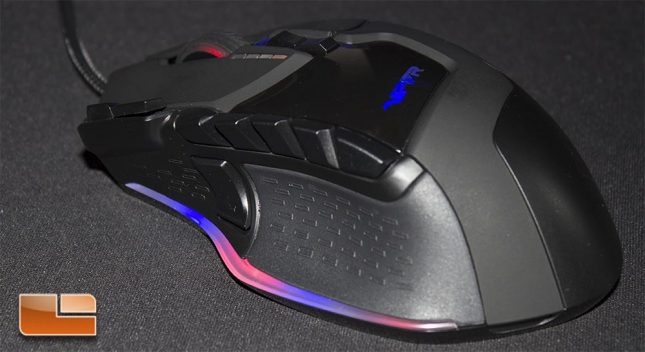 RGB lighting modes can be set in seven different zones. Each zone can be set to an individual color in static or breathing mode, or you can a wave mode on the mouse that cycles RGB through each zone. This is actually the RGB effect that I programmed when I was taking the previous group of screenshots. 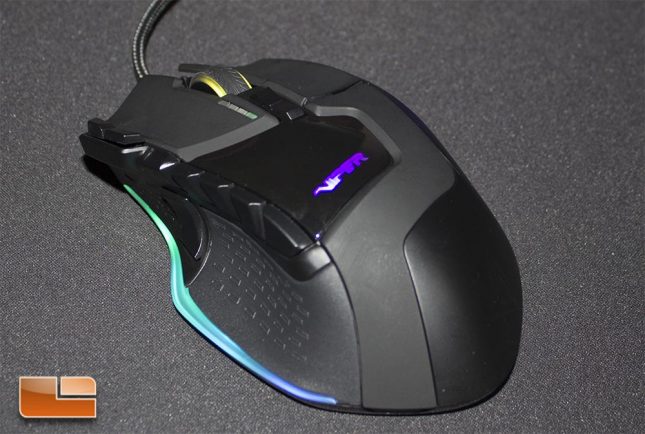 Random mode puts the mouse into a tangent of RGB, with the various zones changing between colors and static and breathing modes. 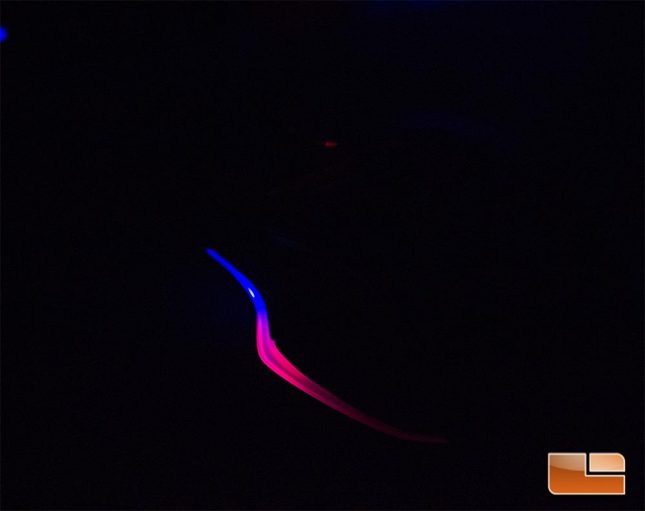 With all of the lights in your house out, you will have no problem locating the Viper V570 RGB Blackout. 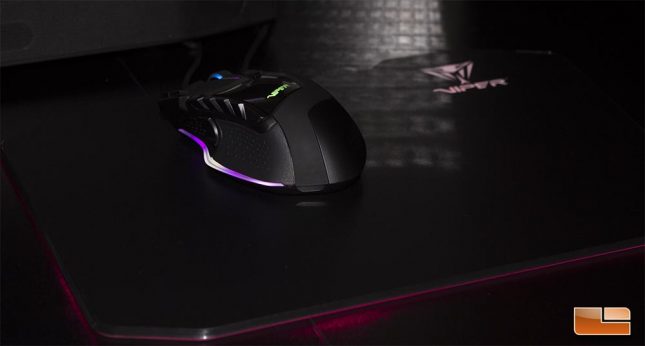 The V570 RGB Blackout Edition is a solid mouse, overall. The software works well and allows for a great deal of customization, which exceeded my expectations. Unfortunately, the performance of this mouse just isn’t where it needs to be when compared to offerings from Logitech and SteelSeries that I’m currently reviewing, which use properly implemented Pixart optical sensors and have better overall build quality.