Part 2: Which motherboard company is more efficient, ASUS or Gigabyte?

A couple months ago I had one of my motherboard reviewers compare the power consumption levels of an ASUS P5E3 Premium [email protected] Edition to the Gigabyte GA-X48-DS5 motherboard.  In his testing he discovered that the ASUS P5E3 Premium was more efficient, but declared consumers in general as the overall winner as both boards lower power usage. Since the review was posted a couple weeks ago I have gotten a ton of negative feedback about the boards we used for testing.  It seems that the two boards we compared had different memory types, which is something that might have thrown our testing results out the door. To be exact both boards used the same Intel X48 Express chipset, but the Gigabyte GA-X48-DS5 used DDR2 memory while the ASUS P5E3 Premium used DDR3.  We set both kits to the same voltage in the review to be fair, but our audience thought this was a mistake and so did Gigabyte who sent a number of concerned e-mails and even a number of phone calls trying to get in touch with us. Legit Reviews has been around since 2002 trying to deliver honest and fair reviews, so we told Gigabyte we would re-do our testing with their DDR3 based platform, the GA-X48T-DQ6. 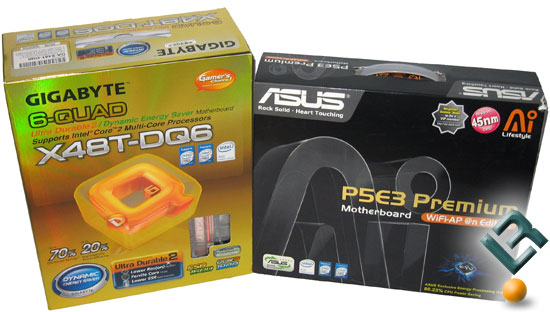 The matchup between the Gigabyte GA-X48T-DQ6 and the ASUS P5E3 Premium [email protected] Edition would be fair according to Gigabyte and I even went the extra mile to let them pick what processor I would use for testing, which ended up being a retail Intel Core 2 Duo E8400 and heat sink. This eliminates the engineering sample processor and water cooling kit used on the prior review, thus creating what many would consider a better test system. 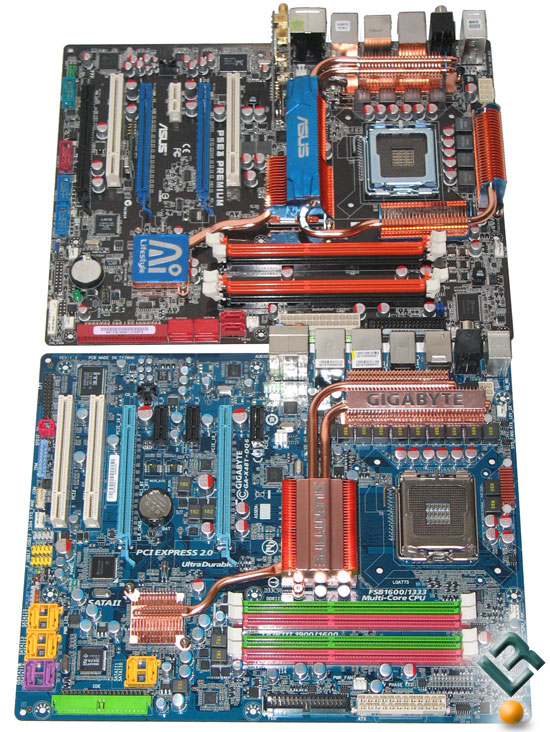 Here are the Gigabyte GA-X48T-DQ6 and the ASUS P5E3 Premium [email protected] Edition motherboards that we used for testing.  Since we are just looking at the power consumption levels there really isn’t much more to talk about, so lets move and look at each test system.