NVIDIA SHIELD TV Gets Updated For 2019

The NVIDIA SHIELD TV streaming media player helped changed the living room in many homes around the world by offering home entertainment, gaming and AI capabilities all in a tiny affordable package. The original NVIDIA SHIELD TV was introduced in early 2015, got a minor update in 2017 and got a rather major overhaul in October 2019 with new internal hardware.

The new NVIDIA SHIELD TV models for 2019 feature a brand new Tegra X1+ processor that delivers up to 25 percent more performance than the Tegra X1 processor used on both predecessors. It also features a new design, a lower starting price, a much improved remote and AI upscaling that makes HD video look amazing on 4K displays. Oh, and you also get Dolby Vision HDR/HDR10 for ultra-vivid imagery and Dolby Atmos for extraordinary audio. Not bad considering the new SHIELD TV models start at $149!

The new NVIDIA Shield TV is available in two different skus with the base model, SHIELD TV, being $149.99 and the other, SHIELD TV PRO, being $199.99. Both feature the same updated CPU, the NVIDIA Tegra X1+. The first thing you’ll notice with the NVIDIA Shield TV base model is that it now uses a cylindrical form factor that measures 6.5-inches in length by about 1.57-inches in diameter rather than a set-top box style previously used. To accompany the Tegra X1+ processor you’ll find 2 GB of RAM, 8 GB of flash storage, and one MicroSD card slot for storage expansion. There are no USB ports on this model.

The Shield TV Pro uses the same set-top box form factor as the previous models, with 3 GB of RAM, 16 GB of flash storage, and two full-size USB 3.0 ports. If you want to connect an external hard drive, portable SSD, game controllers, cameras, TV tuners, or anything else over USB this model is a must. It will cost you an extra $50, but will be a requirement for those looking to run a Plex server or something along those lines. 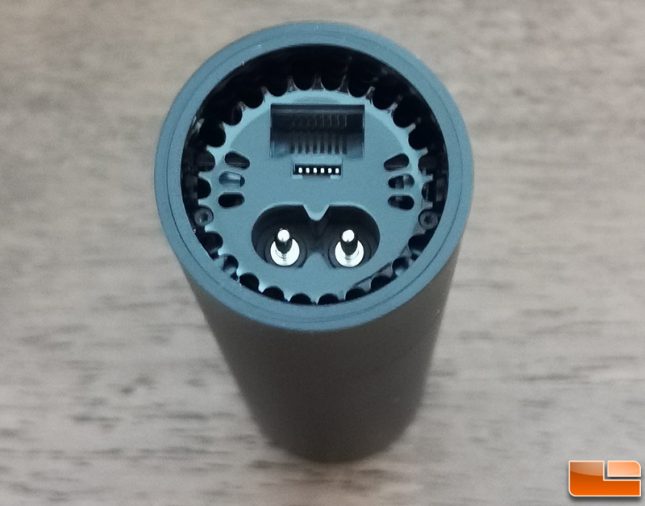 On one end of the NVIDIA SHIELD TV ‘tube’ you’ll find the power power an the wired Gigabit LAN port. 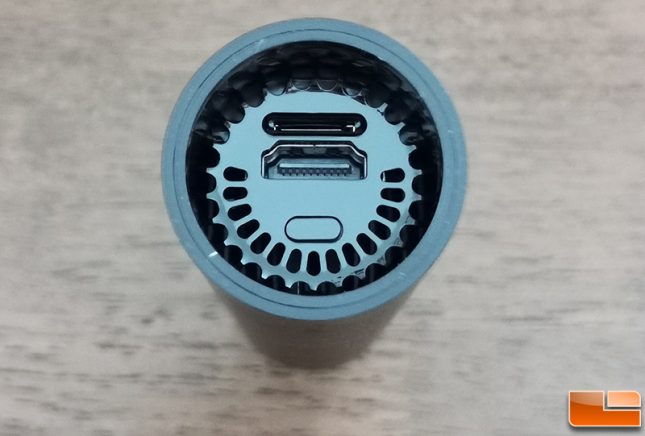 Turning the device over you’ll find the microSD card slot, HDMI 2.0b video output with HDCP 2.2 and CEC support. Below the HDMI port there is a button that triggers a sound on the remote to help you find it. With the power cable connector on one end and the HDMI adapter on the other it means you’ll have to lay the SHIELD TV on the rounded tube. This seems a bit awkward, but NVIDIA claims the SHIELD was designed to lay on the floor alongside your other cables. Speaking of cables… NVIDIA does not include an HDMI cable, so make sure you have an extra cable laying around. 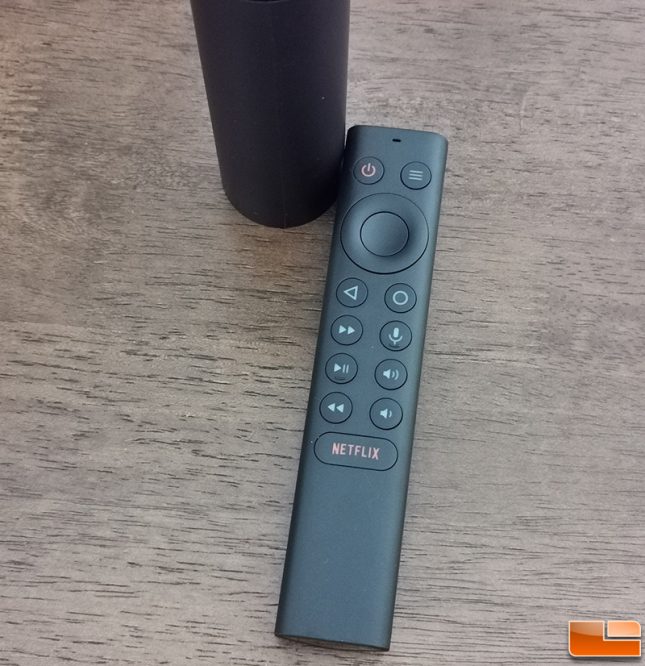 The new Bluetooth remote is a huge improvement over the original remote control in pretty much every conceivable way. We’ve never had a triangular prism shaped remote before, but it turned out to be very comfortable. The motion-activated Shield remote runs on two AAA batteries (included) and has backlit buttons that makes using it in low-light or dark situations a breeze. There are now dedicated buttons for volume control, fast-forward and rewind!

It should also be noted that the SHIELD remote is also programmable, so you can remap the Netflix key to something else if you wanted to do so. It isn’t perfect yet though as women with long nails had issues with the recessed enter button and the vertical arrangement of the fast forward, pause, and rewind keys takes a long time to get used it. The most underrated feature is the built-in lost remote locator and that is worth its weight in gold if you have kids or always lose the remote.

The good news for existing Shield TV is that the new 2019 remote is compatible with the older 2015 and 2017 versions of the device, too. You can purchase it by itself for $29.99 on NVIDIA.com starting in January 2020. 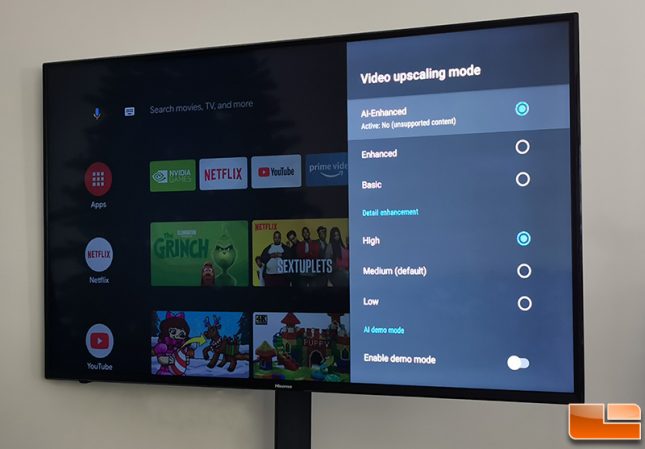 Setting up the SHIELD TV for the very first time is fairly straight forward and Android TV has gotten a lot better over the years. We won’t be going in-depth on Android TV here, but the user interface is clean and you can quickly access your favorite services. Netflix, Youtube, Amazon Prime Video, NVIDIA Games, Google Play Movies & TV, Vudu, Amazon Music, Google Play Store, Google Play Music, PLEX and Google Play Games all are included without having to install anything. Disney+ and thousands of other applications can be downloaded from the App store and run without issues. There are also no banner ads for those that might have had negative experiences on Roku and Fire TV streaming devices. Android TV and Google Assistant voice still have some nuances, but NVIDIA can’t really make changes there.

AI upscaling is the big new feature on the SHIELD TV. It is handled by on-device machine intelligence that has been trained on a deep neural network to turn both 720p and 1080p signals into much sharper, 4K-equivalent images. One might think their 4K UHD TV already does this, but often streamed content is not upscaled by the TV. By default, detail enhancement is set to medium, but it can be increased or lowered to your liking. 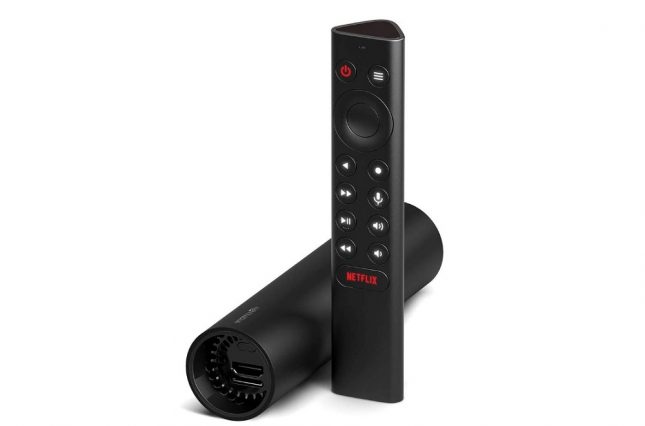 Final Thoughts on the SHIELD TV 2019

After using the all-new 2019 design of the NVIDIA SHIELD TV we are pleased with the device. It delivers the best Android TV experience with the added benefit of NVIDIA Games. GeForce Now (beta) is still free and certainly worth checking out if you haven’t already. Google’s own Stadia gaming service is supposed to arrive on Android TV in 2020, so for the time being NVIDIA has no competition on the gaming front. If you are looking for a good streaming and gaming experience in your living room the 2019 SHIELD TV is our top pick!

Where does NVIDIA go from here with the NVIDIA SHIELD TV? Well, it doesn’t yet support HDR10+, Wi-Fi 6, or HDMI 2.1. It seems NVIDIA has a two year cadence on releasing updates for this platform and we would expect all of that tech supported on the next gen devices. What does that mean? HDR10+, the royalty-free non-proprietary alternative to Dolby Vision, is not supported and used in some Amazon Prime content. The NVIDIA SHIELD TV also doesn’t stream YouTube videos in HDR since it doesn’t support VP9 profile 2.

You can pickup the base 2019 NVIDIA SHIELD TV that we reviewed here for $149.99 shipped and might be the perfect holiday gift if you are still looking for one!

Legit Bottom Line: The NVIDIA SHIELD TV keeps getting better with every release and the new 2019 models should appeal to the widest audience yet!