More than five months ago, NVIDIA announced the industry’s first hybrid technology for PC platforms during the Consumer Electronics Show in Las Vegas.  During this time, they also showed off the nForce 780a SLI motherboards that were due out in Q1 2008.  It seems things got pushed back as NVIDIA is officially announcing the nForce 7 series today in Q2 2008.  AMD hasn’t been doing too hot in the enthusiast market, so the launch of the nForce 7 series might not be that interesting to many of our readers.  If that is what you are thinking right now, keep reading as this nForce series will show what is to come for Intel platforms later this year. NVIDIA has confirmed that Intel platforms with Hybrid technology are coming out in Q3 of this year, so they will be even more refined than the nForce 7 series for AMD processors. 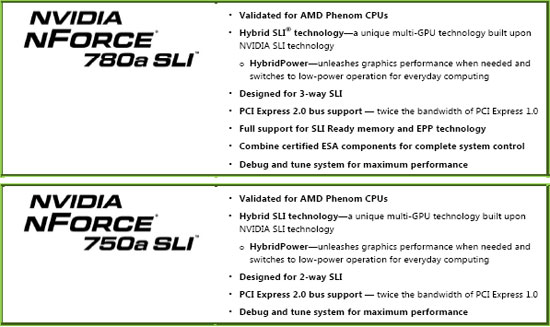 The NVIDIA nForce 7 series consists of two chipsets: the 780a SLI and the 750a SLI.  The major difference that can be seen from the layout of the boards is that the 780a can do 3-way SLI and that’s about it.  The nForce 780a SLI chipset also supports SLI ready memory and EPP technology for those who have hardware with those features. 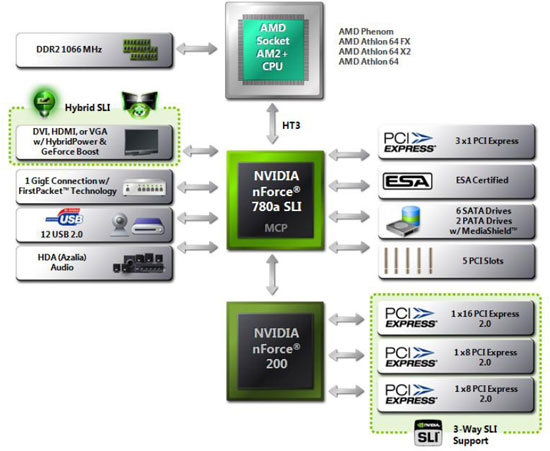 The block diagram of the NVIDIA nForce 780a SLI chipset tells you pretty much all you need to know about the chipset and what it can do. The NVIDIA nForce 780a SLI MCP supports DDR2 JEDEC 800 MHz and 1066 MHz memory. NVIDIA nForce 780a SLI motherboards also support NVIDIA SLI-Ready memory with EPP 1.0 that increases the bandwidth of memory buses when coupled with select third party components with one click implementation. For those that have regular memory kits this means nothing more than you have to still manually go into the BIOS and change the settings for your kit.

Hybrid SLI is the biggest new feature that many will be talking about.  HybridPower allows the PC to switch processing from a single discrete GPU or multiple discrete GPUs in SLI configuration to the motherboard GPU reducing energy consumption and enable a quieter PC environment.  HybridPower is most useful in situations where graphics horsepower is not required, such as simple e-mail or Internet browsing. It is also beneficial for those users who want a quiet operating state with reduced heat. When a game or application is started that requires additional 3D power, the PC can automatically transition back to the discrete graphics cards and power up the 3D capabilities, all transparently to the end user. It should be noted that the nForce 780a SLI chipset supports single-link DVI outputs. This means the maximum resolution is 1920×1200 when a monitor is connected to the motherboard GPU. Higher resolutions can be run if connected directly to a video card, but then the new power saving features like HybridPower will not work. Since we have touched on this in the past we will move on to the first nForce 780a SLI motherboard that we will be reviewing – the ASUS M3N-HT Deluxe!