For this preview NVIDIA couldn’t send out a GeForce Go 7950GTX graphics card even though we already own the Dell M1710 gaming notebook, so all we have to show today are their own internal numbers.  We asked NVIDIA if they could send out a GPU so we could replace our 7900GTX for a future article, but we are not holding our breath. 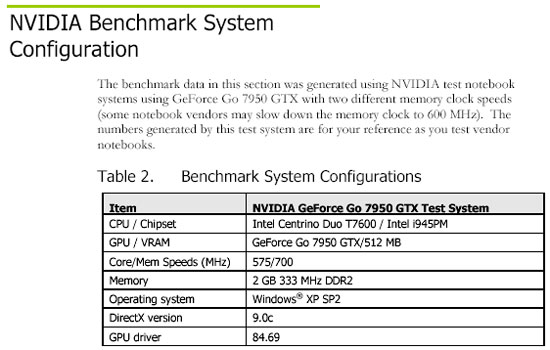 As mentioned previously some vendors will be shipping the memory at 600MHz, so NVIDIA showed performance on a good number of games at both settings. Also take note that they are running 84.69 drivers while only 84.63 drivers are available to the public.

From the benchmarking NVIDIA released it shows that the extra 100MHz on the graphics card is worth having in certain game, but in other games like Halo at 1900×1200 1x/1x having faster memory decreased performance.

There isn’t much more to say about the GeForce Go 7950GTX right now as we don’t have one to try out.  Other than a 75MHz increase on the core and a possible increase on the memory (depending on the notebook) nothing else has changed. Our daily readers might recall when we built our own gaming notebook back in July 2006 that we overclocked our GeForce Go 7900GTX to 568Mhz on the core and 800MHz on the memory, so keep that in mind if you already own the GeForce Go 7900GTX.

UPDATE: I just fired up my Dell M1710 notebook that has a GeForce Go 7900GTX graphics card and an Intel Core 2 Duo T7600 processor in it and found that it overclocked very nicely. I was able to reach 610MHz on the core and 790MHz on the memory after using CoolBits on the Forceware 84.63 drivers. NVIDIA GeForce Go 7900 GTX owners have nothing to gripe about as they just need to overclock and they will again have the fastest GPU out there. 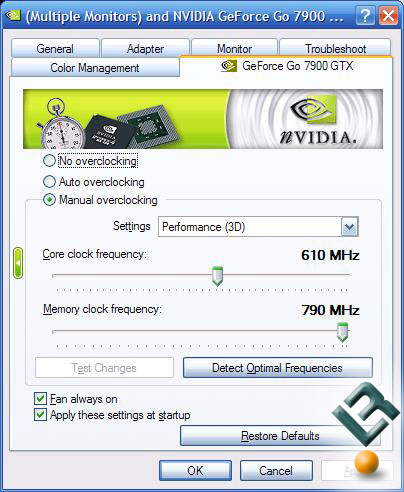