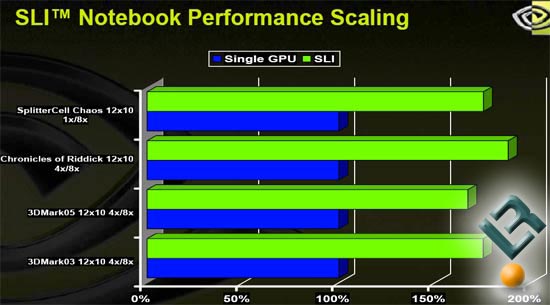 It looks like the SLI Notebooks scale very well, but only a small number of benchmarks were shown to the press. Other than running at 1900×1200 and doing games well an SLI notebook can do a number of other things also like: 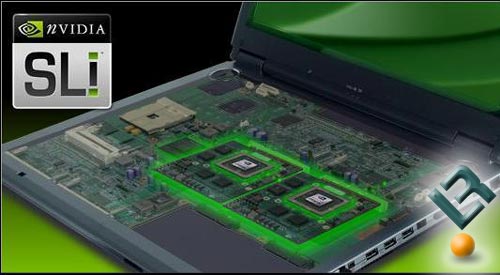 When it comes to battery life on the NVIDIA SLI notebook systems NVIDIA didn’t have too much to say as that is going to be a major issue with these new SLI gaming notebooks.  With high end processors, two GeForce Go 7800GTX video cards and 19″ LCD monitors the battery life on these wont be the greatest. When plugged in and run on full power mode these new SLI notebooks will put many enthusiasts desktop systems to shame.

Kudos to NVIDIA for taking an idea they talked about 2 years ago before SLI was even out in desktops and making it happen. NVIDIA claims that SLI Notebooks are available today from their launch partners, but we could not find one for purchase.  It looks like this is a paper launch, but hopefully it will not be for long.  We look forward to getting our hands on one of these notebooks and will be bringing you a full review in the near future.

If you are looking to be the first person on the street to own an SLI notebook keep and eye on these top-tier gaming system builders: Sager, Alienware, Velocity Micro, and Voodoo as well as partners ABS, AJP, BioHazard, Cybersystem, Evesham, Gericom, Hypersonic, Multirama, Olidata, Plaisio, ProStar, rockdirect, Rombus, Savrow, Vicious PC, XS2, and Wortmann for upcoming SLI powered notebooks.