Synching the Nokia BH-101 took less that a minute and was as basic and uncomplicated as the unit is itself.  There were absolutely no problems in syncing the headset to the 3 different phones that we used to test it.

This inexpensive headset provided excellent clarity for the user, for those on the other side however, the quality varied greatly from call to call.  When in a quiet environment sometimes those I spoke to could not tell I was using a headset, a few times I was told they could hear me better than when I had no headset at all.  Unfortunately, that did not seem to be the norm for the Nokia BH-101.  More often than not my callers told me that they could hear an echo, sometimes to the extent that they had a hard time following the conversation.  Since the headset provides no sort of noise cancellation, callers could hear road noise and traffic on calls from the road.  Driving with the windows down, even at a low speed, is out of the question.  While the volume on the Nokia BH-101 proved to be fine in most situations, if there was much background noise I found myself struggling to hear some callers, even with the volume turned all the way up.

The multifunction button is nearly the entire face of the headset, which makes for a sleek look and extremely easy use.  This large button makes it simple to answer and end calls with no need to fumble for a small button.  The volume buttons are quite small, but since the the volume was left all the way up for most of the test, it did not prove to be a problem. 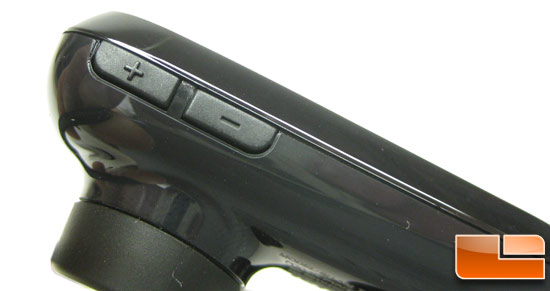 The 30 foot range provided from Nokia proved to accurate in open areas, most often there was no static until I was at least that far away from the phone to which it was connected.  Despite the great range in an open area, carrying the phone in my pocket or bag seemed to be a more difficult task for the Nokia BH-101.  The static produced by concealing the phone was bearable, but annoying nonetheless.