I, like many of our readers, use portable SSDs to move around movies and photos for family. Having a handful of movies and pictures on a portable SSD is great when you have kids as you can quickly access them at home and on the go. Most enthusiasts will likely build a small server for home-media with PLEX or Emby to enjoy your content, but you’ll still need something for when you are say in the car. I am rocking a Chrysler Pacifica these days and you can play movies on the Uconnect Theater with a flash drive or memory stick plugged into one of the USB ports. So, I use portable SSDs to store a handful of movies that can be played off my smart TVs at home and in my kid hauler.

What does this have to do about anything? Well, lately I’ve been killing Crucial X8 1TB portable SSDs at $165 a piece. You know, the one that I reviewed back in October 2019 and is backed by a 3-year warranty. Having one product die could just be bad luck, but when the second one dies just weeks after the first there might be an underlying issue. When the second drive died the last device that it was plugged into was my Hisense TV. I watched a movie off the drive the night before and by mid-day the portable Solid-State Drive was dead as a door nail. All the data was gone and internal drive was toast even out side of the enclosure. 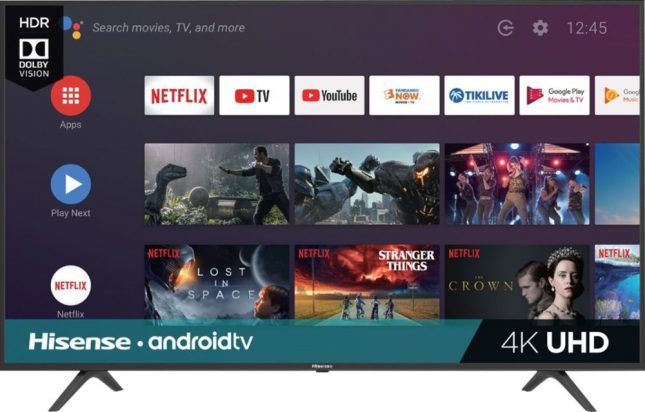 So, the Hisense H6500F Series TV that I bought less than six months ago was being eyed as the culprit. This is an entry-level budget 2019 4K TV model that would be comparable to say the TCL 4 Series 2019, the LG UM6900, and the Vizio V Series 2019. I picked up the 43-inch model under part number 43H6570F from Best Buy when it was on special last winter for $179.99. Not a bad price last year for a 43-inch 4K HDR Android TV considering the MSRP was $249.99. The funny thing now is that I’m using portable SSDs that cost just as much as the TV and they are dying after use. Not cool!

I remember when taking off the last portable SSD that failed that the drive was really hot despite the TV being shut off. Why would the drive be hot when the TV was turned off? My focus went to what was the USB port doing when the TV was turned off. To figure that out I ordered in a Klein Tools ETE920 USB Power Meter ($29.99) that measures voltage, current, capacity, energy and resistance. 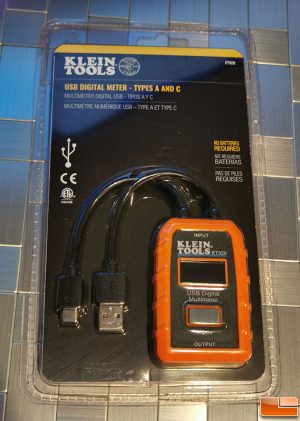 It took a few days for Amazon to deliver the ET920 due to the number of orders they are getting these days, but it finally arrived. It only took a few minutes to figure out what was wrong with my Hisense H6500F Series TV once I had the USB digital meter. While the TV was turned off, both of the USB ports would output 5.16-5.17 Volt of power for about nine seconds before dropping down to 0 Volts for a second or so. This cycle continues the entire time the TV is turned off, so anything plugged into the USB port is taking part in an endless loop of power cycles until the TV power is turned on. Check out the issue in the video from my Tweet earlier today:

When my @Hisense_USA H6500F Series TV from 2019 is turned off, the USB ports power cycle about every 10 seconds. I have killed more than one portable SSD on this TV & that stinks. Time to get it warranty repaired & hope this isn't a feature#hisense #warranty #USB #TV #androidtv pic.twitter.com/dZyrL5eNsp

None of my other TV models do this. Armed with this information I contacted Hisense via e-mail since my TV is still covered under their 1-year warranty. After 4-days there was no response to my e-mail, so I called the 1-888 phone number and talked to a tier 1 technical support specialist. He asked me to see if turning off my TV would fix the issue and then asked if I would do a factory reset to the TV. Neither fixed the issue, so he escalated the case to a tier 2 technical support team member that would call me back in 24 to 48 hours. 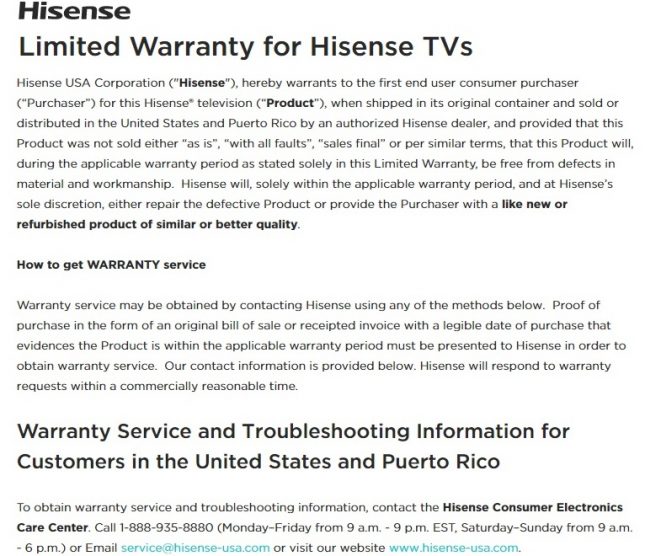 That call back from tier 2 support would come just a couple hours later and that technician believed that the USB ports were faulty. He said that he wanted to schedule a local service technician to come out to and replace the TVs main board. This service technician spoke fluent English, was knowledgeable and located in Jamaica. These main boards run about $50 for a used one on eBay, which isn’t too bad if you happen to have this issue and are not covered under warranty. 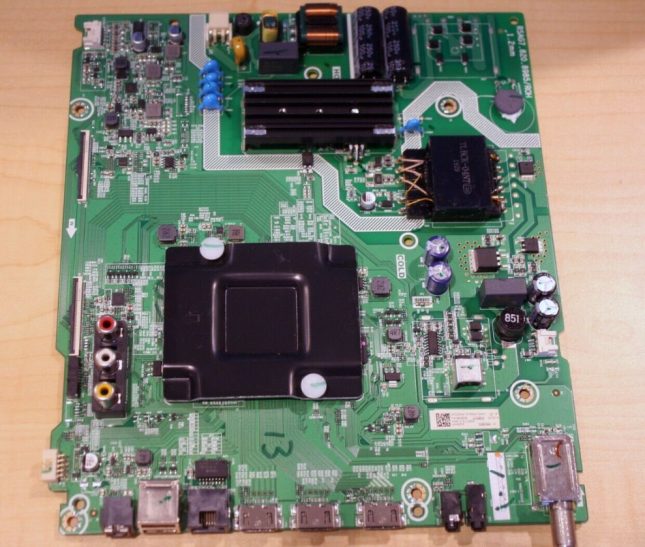 After providing Hisense with proof of purchase a local TV repair company gave me a call back and put me on the schedule for repair just over a week away. I explained the issue to him and he said that he can’t do any trouble shooting and only replaces what NSA authorizes. If the replacement board works, then great, but if it doesn’t work he will have to contact NSA and get back to me on the next steps. Who is NSA? A quick Google search on Hisense and NSA tuned up National Service Alliance (NSA). 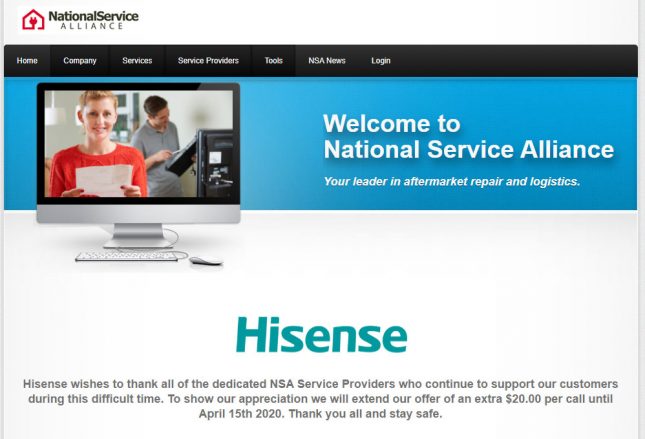 It seems that Hisense is paying NSA to handle all of their aftermarket warranty support in the United States at this point in time. The NSA website oddly enough shows that they were getting an extra $20 per call from Hisense during the global Coronavirus (COVID-19) pandemic. So, now the repair of my Hisense TV is in the hands of a local service technician that is coming out in eight days to replace the main board in my TV. That is all he is allowed to do per his contract terms with NSA.

The warranty process has been smooth so far and I am sharing all this information to help others that might have the same issue. It might also be useful to people that want to know how good a Hisense warranty is or how easily it is to get something fixed under their warranty policy. I was not expecting in-home warranty service like this for an entry-level TV with the standard warranty.

For a low-cost 43-inch 4K UHD Android TV is seems like they are doing everything possible to resolve the issue at no cost to me. That is pretty impressive and worth sharing.

I’ll be sure to update this post on May 29th, 2020 after the local service technician replaces the main board. Hopefully it fixes the USB power issue on my Hisense H6500F Series TV. 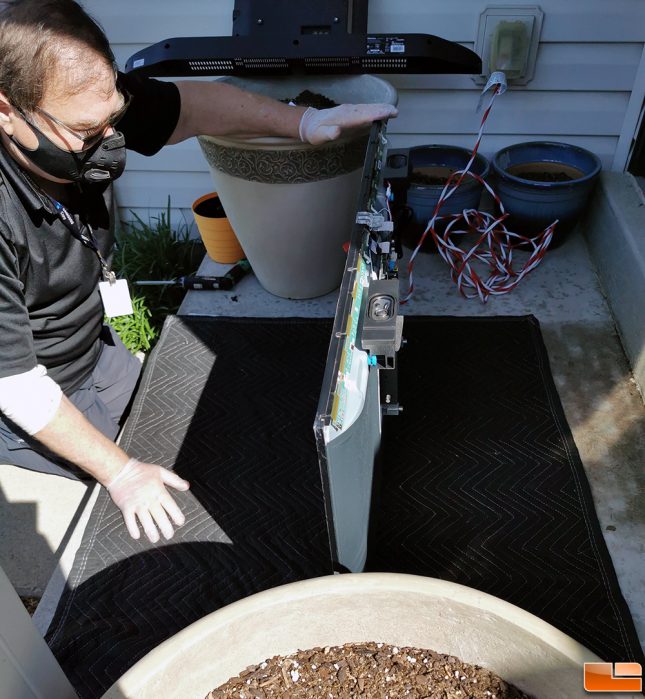 Update 05/29/2020: The local repair company that was hired to do the repair showed up at the scheduled time and swapped out replacement boards in under 15 minutes. When the unit is powered off the USB ports remain off, so they have successfully repaired the Hisense H6500F Series TV. The warranty coverage provided by Hisense under their standard 1-year warranty period is exceptional! I’m pretty sure they lost money on this sale, but they have yet another happy customer.