Have you ever seen a review test many dozens of game titles showing you performance on more than just games like F.E.A.R., DOOM 3, and Quake 4? Several months ago during a conversation with NVIDIA the idea of doing a multi-site article was brought up by NVIDIA and Legit Reviews was interested in the article because one has never been done before.  The article would be one of the most in-depth platform reviews ever done and we signed up to help out in the series of articles. NVIDIA spear headed the articles by getting the interested sites together and came up with the final team of sites and then let them do as they pleased.  The end result turned out being a collaborative effort with nine well known hardware sites creating a series of articles that would span across 9 sites, cover over 60 gaming benchmarks, and put 3 ATI CrossFire and 3 NVIDIA SLI platforms to the test.

The amount of work, money and time that has gone into this article is nothing short of amazing.  Each site that benchmarked game titles averaged between 100 to 200 hours testing today’s most popular games on six different platforms.  Legit Reviews was picked to do one of the uncommon benchmarking sections and the results were nothing short of amazing.  By tackling this article we were able to benchmark 8 game titles that we have never benchmarked before, which gives gamers around the world a better idea of what platform is right for their needs.

To help judge the performance levels of different graphics cards we built three platform levels to use for the series of articles.  The test systems were picked by pricing and we selected $1000 for the budget system, $2000 for the mid-range systems, and an unlimited budget for the high-end systems. When we started planning for this series of articles the Intel Core 2 Duo processor was a number of months away from being launched, so we used AMD Athlon 64 X2 processors for all of the testing.  Even today with AMD’s drastic price cuts we feel that this article still serves its purpose as AMD’s processors still pack awesome price versus performance. 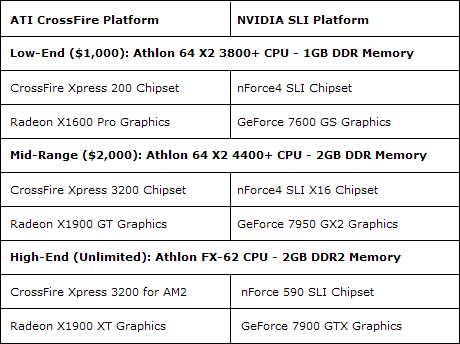 Before we tell you what the test systems are let’s go ahead and clear up the air before we get any further.  The article was started with the help of NVIDIA, but each site was able to do as they pleased when it came to testing.  Legit Reviews picked each and every game that we tested in this article on our own and the game settings and resolutions were picked out by Brian Wallace here at Legit Reviews. All of the graphics cards were picked out by the group of nine sites under the direction of Josh at PenstarSys.  Legit Reviews worked with both ATI and NVIDIA during the duration of the article to make sure our testing was balanced and fair. After the platform graphic solutions were picked Legit Reviews had full control of the games and tested we conducted, so ATI/NVIDIA fan boys need not worry as no sides were taken on this article.