Mining On The AMD Ryzen Threadripper 1950X Processor With Nicehash

The cryptocurrency market might be down 50% from all-time highs due to tougher regulation in a handful of countries, but miners are still making profits by processing outstanding transactions into blocks and adding them to the blockchain. Now that everyone knows about cryptocurrency, due to all the news coverage, the run on computer hardware has continued. People that don’t own a desktop PC are building them now as mining PCs for extra income. The only problem is that it is still nearly impossible to find an AMD Radeon RX 580/570 or Radeon RX Vega series graphics card. The NVIDIA GeForce GTX 1070 and GeForce GTX 1060 series cards are just as tough to find. If you want to mine alt coins and can’t find a GPU that isn’t selling at crazy inflated prices, maybe you should look at CPUs! 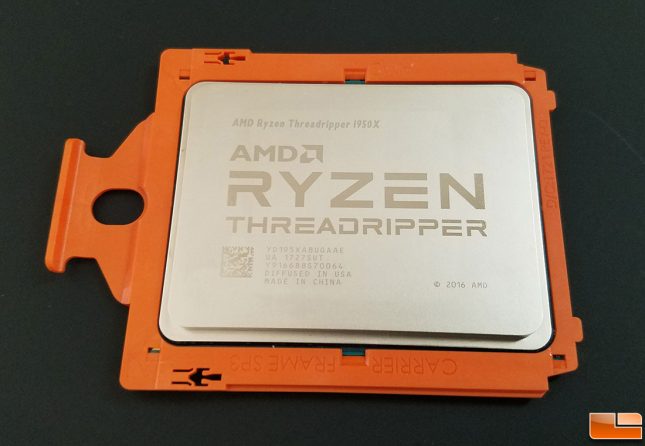 When we plugged that into WhatToMine on February 1st we saw that running Nicehash was the most profitable way to mine CryptoNight and one could make about $3 per day. Running nicehash to mine cryptocurrencies also happens to be one of the simplest ways to get mining, so we figured we’d give it a shot. We downloaded NiceHash Miner Legacy (v1.8.1.8) and got mining. It is worth pointing out that if you are installing NiceHash or any miner on a daily driver PC with a virus scanner installed you’ll need to tell the software white list or ignore the mining applications as they will be seen as threats. 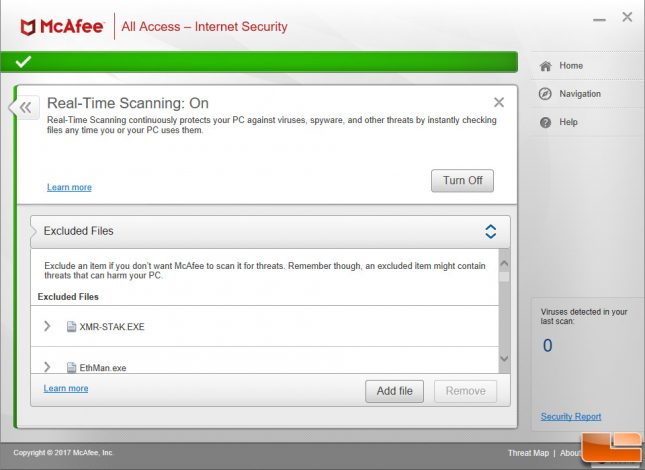 On our stock AMD Ryzen Threadripper 1950X 16-core processor we were getting 1350 H/s on CryptoNight and that is right in the ballpark that it should be. The expected profit per day is right around $3. 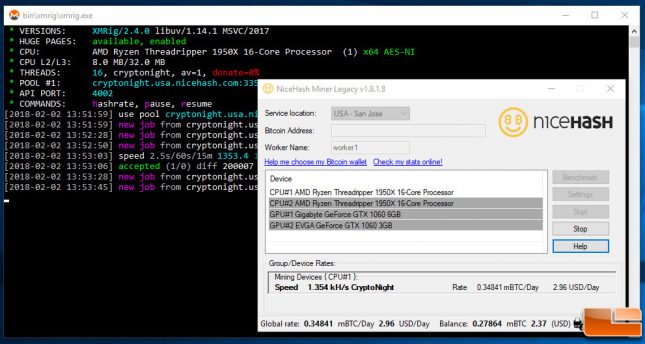 Note that we only ran one of the two available CPU’s. This is because the CryptoNight algorithm uses roughly 2MB of L3 cache per mining thread and the Threadripper 1950X has 32MB of cache. If you enable the other CPU and try mining the performance plummets and the profit per day goes down to just $0.49 per day as the processor doesn’t have enough cache available. The Intel Core i9-7900X 10-core, 20-thread processor costs $969 shipped, but didn’t mine well in our testing as it didn’t have enough cache. We were getting 490 H/s with it due partly to the  fact that it only has 13.75 MB of L3 cache. That means only 6-threads can have the full 2MB of L3 cache needed for the CryptoNight algorithm. 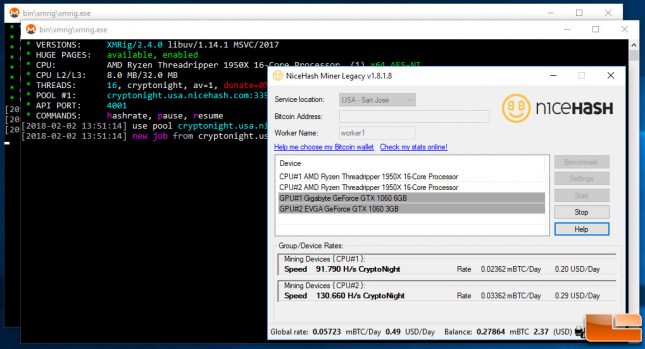 Enabling GPU mining in the NiceHash utility did not impact CPU mining performance as 16-threads of the processor weren’t being used. This meant that the system was still fairly responsive and you can easily surf the web, handle your e-mail inbox and watch some videos. If you want to do CPU or GPU intensive tasks like editing a move or play a video game you can simply hit stop on the NiceHash miner and then start it again when you are done. 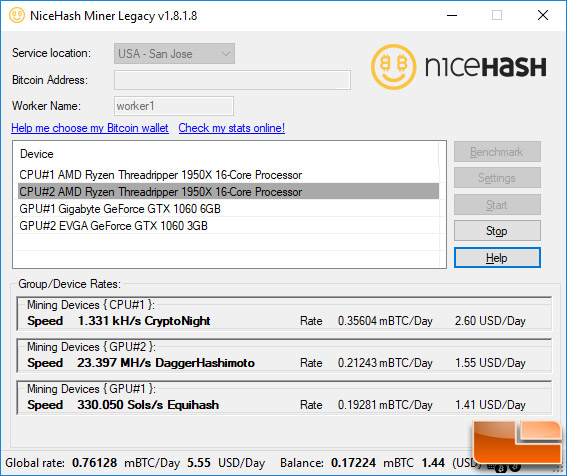 With two NVIDIA GeForce GTX 1060 video cards in the system mining alongside the AMD Ryzen Threadripper 1950X processor we are currently set to make about $5.55 per day or just over $2,000 a year before expenses. 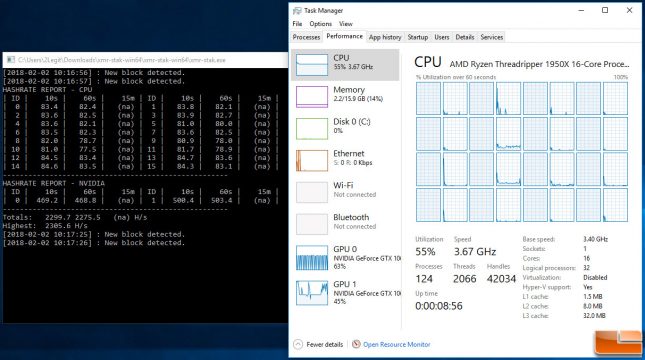 If you are a more advanced user or don’t want to use NiceHash miner you can use xmr-stak-win64 for CPU mining and point it at the NiceHash pool or any other pool that you want. You can even compile your own no fee CryptoNight miner if you want to maximize revenue!

When it comes to total system power draw at the wall outlet we found some pretty impressive numbers on the Kill A Watt Meter ($18.89 shipped). The entire system was using 93 Watts at idle and 206 Watts with GPU only mining. That is a power draw of 113 Watts on the CPU, which isn’t too bad. The entire system at 206 Watts puts the power cost per 24 hour day at $0.40 for those paying $0.08 per kWh.

NiceHash shows that a 1950X will earn you roughly 0.00036 BTC/day. With the cryptocurrency taking a dive south that puts the revenue per day of running just the AMD Ryzen Threadripper 1950X at $2.42. After you take out your electric expenses of $0.40 per day you are left with a profit of $2 per day. Just four days ago we when started working on this article the profit was shown to be $3, but the price of most alt coins is dropping. Even at $2 per day one could make $730 per year year mining with the AMD Ryzen Threadripper 1950X and basically cover the cost of the processor itself in just over a year at current prices. If the price per day goes back up to $3 per day that yearly profit would be almost $1,100. Months ago there were people making $5 a day with the Threadripper 1950X, so if cryptocurrency prices manage to recover it could get interesting.

Just a heads up for those that might be looking to buy a new system and are looking for a way that mining can offset the system build costs. The AMD Ryzen Threadripper 1950X processor currently runs $899.99 shipped and the AMD Ryzen Threadripper 1920X processor is $716.58 shipped. AMD X399 motherboards are not inexpensive though as the ASUS ROG Zenith Extreme X399 board that we used for testing runs $479.99 shipped. The ASUS Prime X399-A motherboard at $316.91 shipped would likely be a better choice for someone looking for a budget friendly and has the same number of PCIe slots (6).

AMD Ryzen Threadripper CPUs likely won’t be flying off the shelf with $2 a day profit numbers, but mining with them is profitable. You can also overclock the processor for improved mining performance albeit at the cost of higher power consumption.

Update 2/20/2018: The cryptocurrency market has rebounded nicely from the crash that happened just before this article was published. We’ve been CPU mining on just the AMD Ryzen Threadripper 1950X processor at stock clocks and making about $2.72 per day before expenses (electric). Right now were are averaging a payment of 0.001 BTC every five days and Nicehash shows that we are earning 0.0003 BTC per day from the 1950X CPU. 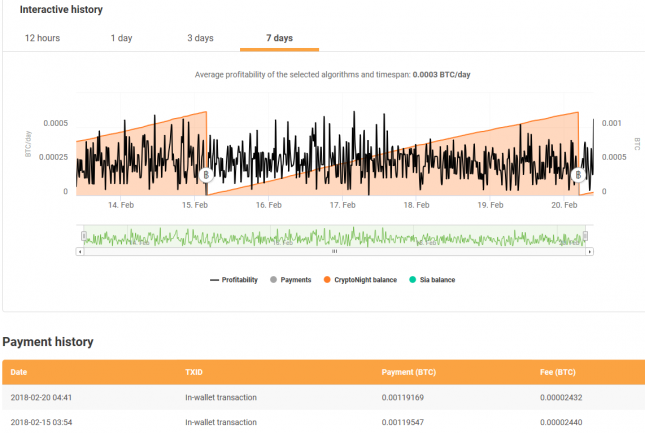