The Micron 1100 512GB M.2 SATA SSD is an enterprise class drive that is aimed at those needing a FIPS 140-2 security rating. Companies like CDW are currently selling this drive for $169.99, so MyDigitalDiscount offering them for $59.99 or lower is pretty impressive. Right now Newegg has this drive on sale for $44.99 shipped. That is the lowest price of any M.2 SATA 512GB SSD that we could find on sites like CDW and Newegg. The performance numbers aren’t going to top any performance charts, but it’s respectable and dare we say ideal for mainstream computing applications on a budget. SSDs blow spinning disks (hard drives) away with quick data access, fast system boot times and the ability to launch applications rapidly. The fact that this drive is self-encrypting (SED) and has an epoxy coating to be FIPS 140-2 compliant also make it ideal for many business, government and military applications. 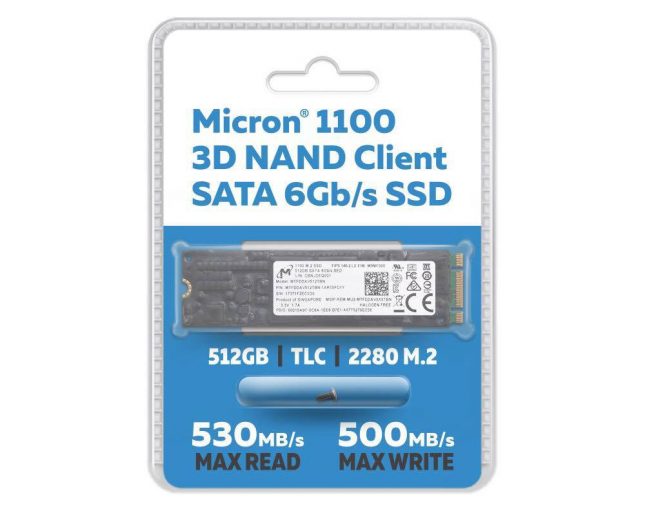 At the end of the day the Micron 1100 512GB M.2 SATA drive from MyDigitalDiscount appears to be a pretty solid drive for the price that you are paying for it. It’s not the fastest SATA SSD on the market, but we’ve seen this model being sold for as low as $50 each without the retail packing and up to $60 each with retail packaging. You won’t find another M.2 2280 SATA Drive that is 512GB for that price that is brand new from name brand company. We see many small system builders grabbing a good number of these drives as building PCs with a primary 512GB SSD is pretty popular and desired by most. The performance on these drives is more than enough for mainstream users as the average consumer yet knows the difference between a SATA drive and one that uses faster NVMe interface.

It looks like MyDigitalDiscount got a good deal on a large number of OEM excess drives and appears to be blowing them out at some really good prices. So, we suggest keeping an eye on these if you are looking for a budget friendly 512GB SSD that uses the M.2 SATA interface. Not all M.2 slots support the SATA interface, so be sure to check to see if your motherboard or laptop supports such a drive before ordering.

Legit Bottom Line: The Micron 1100 512GB M.2 SATA SSD is a few years old with decent SATA performance, but what makes it recommended is the blow out price that they are now available for!