Intel Corporation is currently ramping up efforts to make their processors competitive with against ARM in the tablet market place. ARM’s smartphone and tablet applications processors have dominated the smartphone and tablet markets for years and the ARM instruction set architecture become the de facto standard for mobile operating systems. Intel Clover Trail+ (32nm Atom based SOC) is currently Intel’s latest shipping processor for the tablet market and ARM put that processor to the test in a YouTube video that was just released yesterday. 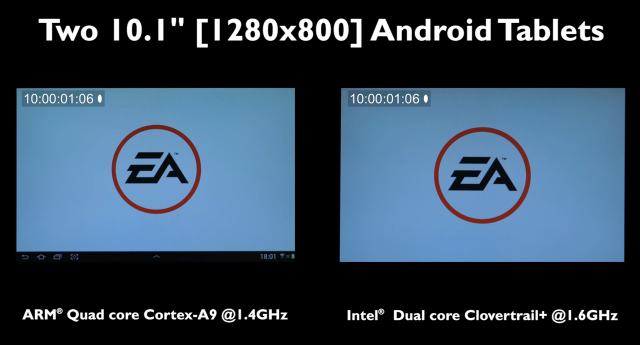 It appears that ARM took two 10.1″ tablets, one with ARM Quad Core Cortex-A9 at 1.4GHz and the other with an Intel Dual Core Clovertrail+ at 1.6GHz (Likely the Intel Atom Z2560 processor). They then video taped a side-by-side comparison using what they call is a “a real application rather than a synthetic benchmark”. 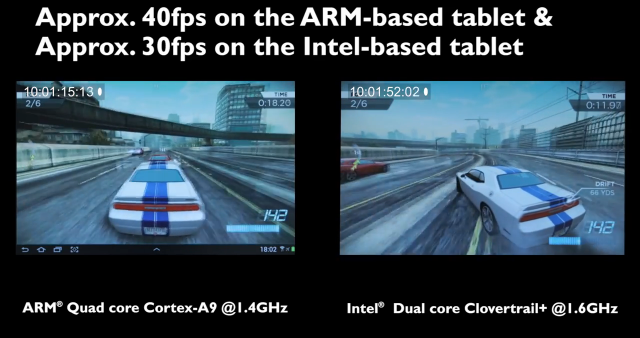 ARM then goes on to popular Android based game title Need for Speed: Most Wanted. The ARM-based game load time was 48.92 seconds and the Intel tablet took 85.48 seconds, which is 36 seconds longer. The in-game frame rate appeared to be approx 40fps on the ARM tablet and only 30fps on the Intel version. The video goes say that the ARM tablet is roughly a year older than the Intel powered model that is playing the game. Could this mean that the year old ARM tablet is the Samsung Galaxy Note 10.1 and the Intel based tablet is the just released Samsung Galaxy Tab 3 10.1?  Both ARM and Intel have new tablets in the works. ARM is moving to ARMv8 (ARM’s 64-bit instruction set) and uses 64-bit processor cores on Cortex A57/A53 processors, which should provide yet another performance boost for ARM.  Intel on the other hand has Bay Trail processors coming out and our early testing on that platform showed solid performance numbers.

Check out the performance video that ARM released below: