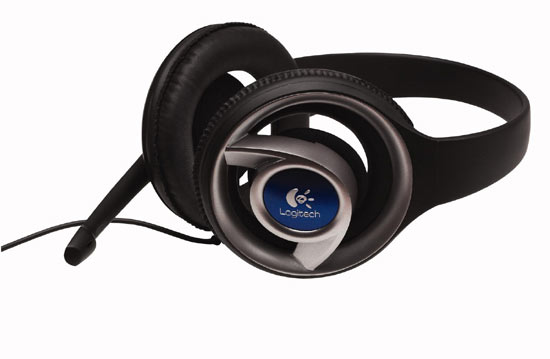 The first thing I noticed was that the entire set was made of plastic which made it heavy on the head and worse, non-conforming to different shaped heads. Now, I have a fairly large head (don?t go there!), but the Logitech fit it like a vice ? very uncomfortable! The set is very rigid and does not conform well at all for any sort of custom fit. Our field tests during music listening and gaming found that even though the ear pads were sufficiently large enough to enclose the ear, because of the way the headset was designed there was never a complete seal around the ear. This helped to contribute to the poor sound quality that we experienced.

Listening to CD quality music was not a great experience. I found myself turning up the volume to get to a nice level, but by doing that, sound from the headset was escaping and others could easily hear what I was playing even though it wasn?t at ear-splitting levels.

During gaming, the poor drivers were not so evident because of the various sound effects and carnage going on. Voice quality from teammates in games like Counter-Strike or Call of Duty was okay. I could make out what they were trying to say, but when compared to earbuds or other headsets used in the past (and in upcoming reviews) the quality was very weak.

We thought the headset might do better when chatting online using Skype, but users on the other end of my conversation complained often that they couldn?t hear me or that the mic was muffled. The microphone, while long enough, only moved at one joint so you couldn?t get it closer to your mouth. The ?noise-canceling? feature on this headset seemed to be nonexistent.

This set was quite basic with the only ?extra? being the ability to control volume with an analog dial on the cord. Not as elegant as some of the other sets on the market. 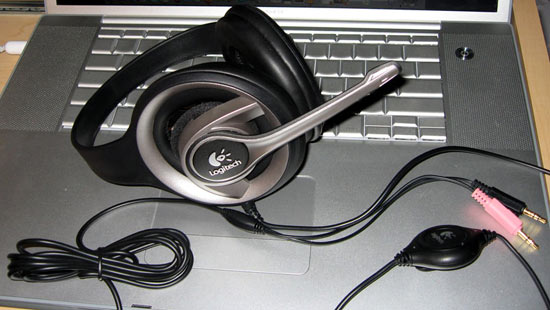 After only about 20 minutes using this headset, the sides of your head and ears start to hurt? really bad. If you a user that wears glasses, you might have an even worse experience since the ?clamps? of the headset press the side of your head. I tried experimenting by using the headset on the top of my head (instead of around the back), but found the microphone to be in a worse position than before. Again the side of my face was hurting after a short while. Not the greatest headset for those all-night frag sessions. Because they are so rigid, you never look quite right when trying to wear them ? doesn?t do much for your coolness factor.

From this headset, like many things in ?entry-level? categories, we get a feel for what we can get when if we spend a little extra money. For those of us who spend hours at a time listening to music, these headsets will not do. More padding around the ears and even an adjustment to fit a variety of skulls would make this headset more attractive. As for in-game and internet chatting, the microphone leaves much to be desired. When you are constantly being asked to repeat things you?ve just said it makes on-line gaming especially difficult. When others complain about how your mic sounds, it makes chatting with Skype and others pretty useless.

In terms of pricing and availability the Logitech Precision PC Gaming Headset is at nearly every electronics store you can think of. We found them on store shelves at Target, Walmart, and CompUSA just to name a few stores. Pricing on the headset ranges from the $25-35 range both locally and online.

As this series progresses, we should see headsets here that are worthy for the enthusiast. Right now, this series of Logitech is not.

Pictures of this headset look pretty cool, but take it out of the box and attempt to wear and use them in an everyday environment, however, is quite different. For $25 street price, it?s an entry set, but for audiophiles and serious gamers, you should look elsewhere.