This is where the rubber hits the road, the real world tests.  All the numbers in those synthetic test confirm that one kit is faster than the other but you could have guess that simply by the faster frequency rating on the Kingston HyperX H2O kit.  I once again tested three of my personal favorite FPS games from oldie but a goody to a modern shooter.  I’ll finish up with another real world test of encoding a blue ray video in MPEG-2 from an AVI file I recorded earlier.

Battlefield Bad Company 2:
Starting with the modern game this one can tax your system pretty well with everything cranked up.  Maybe not as rough as Crysis or Crysis 2 but plenty for a memory test.  I played the game at both minimum resolution (1024×768 in this case) and native resolution for my 24″ monitor (1920 x 1200).  I used FRAPS to capture my frames per second (FPS) with the 60 second benchmark test that averages my frames per second over the 60 seconds. 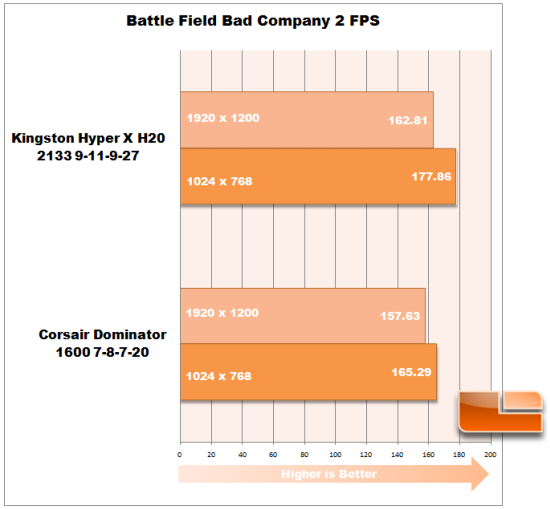 At only 1600MHz the Dominator kit fell 8% behind on the 1024 x 768 resolution and 3% behind on the higher 1920 x 1200 resolution.  That extra 533MHz is showing up as a slight gain.  This just might be the difference in getting the drop on that other sniper across the map that has been harassing you this whole time.
Team Fortress 2:
Same set up as the Battle Field Bad Company 2 test accept this time I can run the test at a lower 800 x 600 to fully remove the GPU impact on the performance.  Battlefield doesn’t offer this low of a resolution. 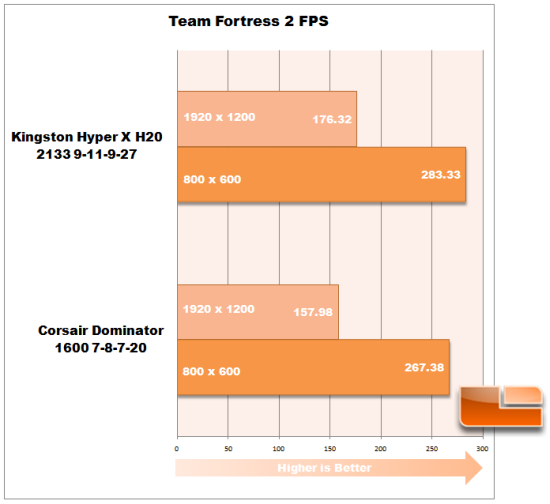 Interestingly the performance gap is larger at the higher resolution at 12% gain for Kingston vs only a 6% improvement at the lower 800 x 600 resolution.  This could simply be due to where I was looking during that 60 seconds as I might have been hiding behind a wall that increases the FPS by not having to render the full view.  In any case as expected there are modest gains from the higher clocked memory kit.
Counter Strike:Source:
My oldie but goody game that I fire up when I just want to mindlessly shoot people without worrying about who is hiding in a tree or if there is a spy in the area.  Same as before with FRAPS and 800 x 600 and 1920 x 1200. 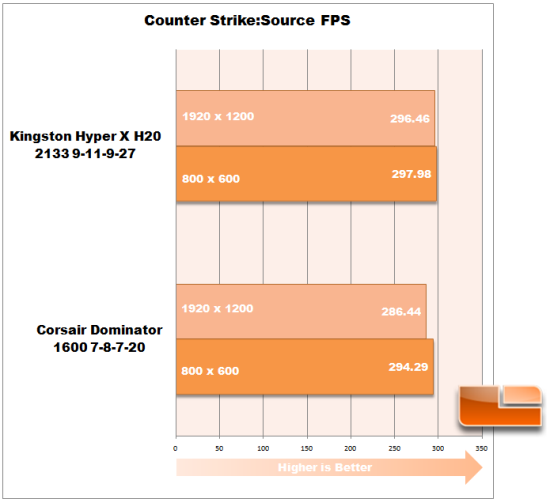 This game barely makes modern GPU’s even break a sweat so you can contribute the majority of the performance to the sub system CPU and memory.  We see a 1% and 3% gain respectively between the two kits.
Adobe Premier Pro CS5:
In order to test these memory kits impact on media encoding I loaded a previously recorded 450MB AVI movie and exported it as 720p MPEG2 movie while using a stop watch to record the time it took Premier to transcode and save the new file. 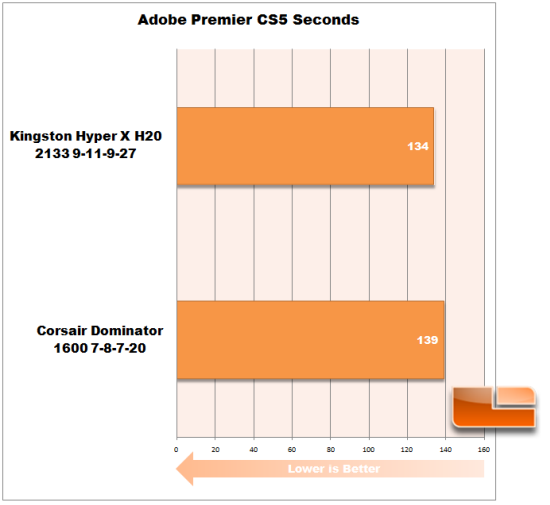 The Kingston kit bested the Corsair kit by 4% in this test by rendering the MPEG-2 five seconds faster.
Questions or Comments? View this thread in our forums!
Jump To:
« Prev 1 2 3 4 5 6  Next »