I was prepared to show you how this kit performed against the Corsair Dominator kit I tested last week and show how the 2133MHz profile compared to my uber overclock.  But after running a few bench marks with the kit running 2143.6MHz I quickly scraped that plan.  The results were same as or worse than the 2133MHz profile due to those timing having to be so lose.  Therefore I am just going to show what a 2133MHz kit looks like against a 1600MHz kit so you can see the extra bang for the buck.

I ran each kit through the test with the memory at the tested XMP profile of 1600MHz 7-8-7-20 for the Corsair Dominator kit and 2133MHz 9-11-9-27 for the Kingston Hyper X H2O kit.  All Games were tested real world with on-line play on the same servers and I attempted to play the same maps with each kit of memory to keep things as similar as possible.
SiSoft Sandra 2011:
I started off with Sandra 2011, the latest version, in order to get some basic statistics for all the kits. 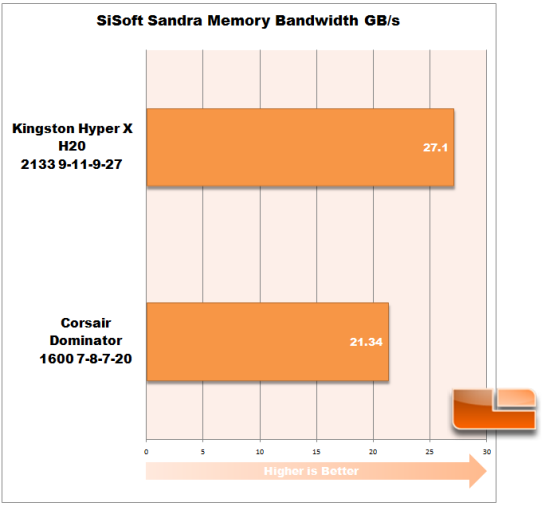 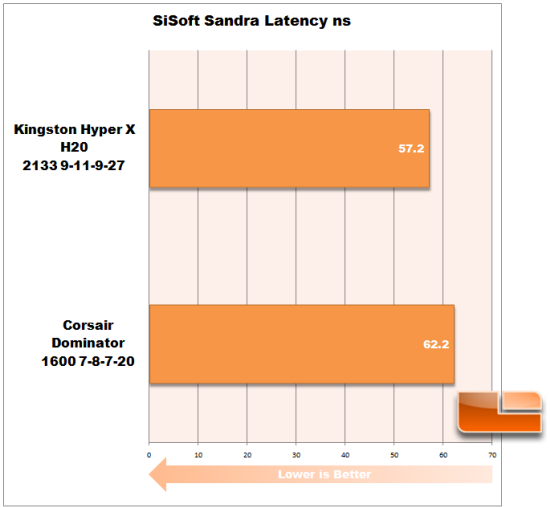 Not surprising that the much higher clocked Kingston Hyper X H2O kit wins both comparisons.  A kit that is 33% faster has 27% better bandwidth and 9% lower latency.
AIDA64 Extreme Edition (formerly Everest)
This is another common synthetic test run on PC memory to show performance statistics. 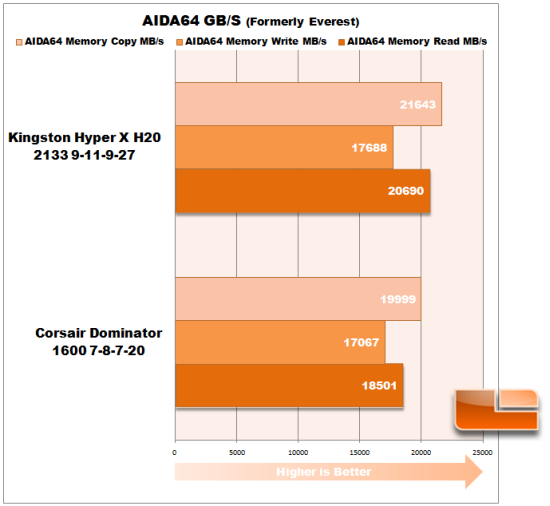 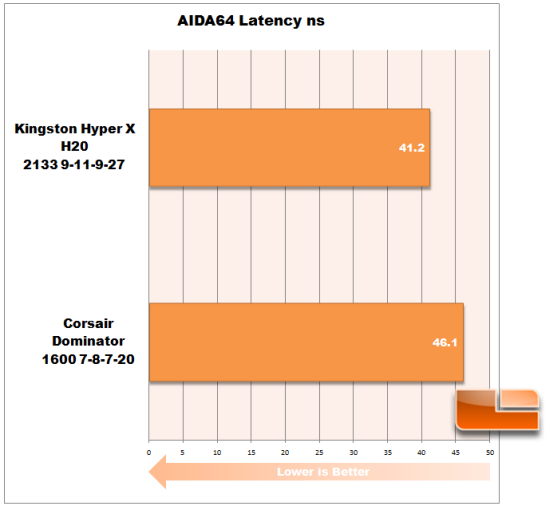 In this test the Kingston HyperX H20 was on average 8% better at memory tasks and had 12% lower latency according to AIDA64 tests.  Not sure this is ground breaking performance delta for around $60.00 more as of this writing, but you are getting something for the premium this kit demands.
Performance Test 7.0
The next test is the memory section of the latest version of Performance Test 7.0 from PassMark Software.  This test gives you an aggregated score based on multiple memory benchmarks called the Memory Mark. According to this test there is 1% difference between the modules.  I am not sure this test tells the full story of the delta in performance as it is bigger than 1% but generally speaking this is saying you get more performance out of this 2133MHz kit but not a ton more.  A lot of this has to do with the platform itself as most of these memory makers are simply running into the limits of the boards they are running on.
Hyper PI:
One of my standards for memory testings is Hyper Pi ver 0.99b.  If you get rounding errors you know right away your timing is too tight or your frequency is a bit too high.  This test is great if you get past post and boot but want to see if things are working ok.  I also like to use Prime 95 on blended to really make sure things are ok.
This test was run at both 1M and 8M settings.  If you are not familar with Hyper Pi it is the new front end of the old standard Super Pi, but improved with multi-threading support and an average time readout at the end of a cycle. 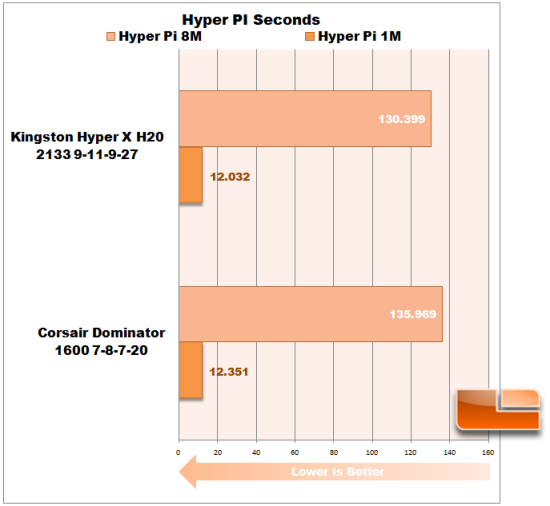 The Kingston HyperX H2O kit has on average a 3.5% advantage over the Corsair Dominator kit.  About what I would expect in this test as it has as much to do with the CPU as the memory.
Next we look at some real world testing to see if the 33% boost in frequency over the Dominator kit really pays off.
Questions or Comments? View this thread in our forums!
Jump To:
« Prev 1 2 3 4 5 6  Next »