With Intel’s upcoming Conroe based processors lurking just around the corner and AMD’s AM2 processors now out and about many enthusiasts and gamers should be looking at PC2-6400 memory as the speed grade to power their next platform. With PC2-6400 memory available at CAS Latencies of three, four and five consumers are left with a plethora of memory choices for their quest to purchase 800MHz memory.

To help figure out which set of timings are right for you ask yourself a few questions. Does money matter to you? If the answer is no then C3 memory is right for you and is the fastest 800MHz memory that money can buy. If you are on a tight budget, but still somehow managing to build a new computer then C5 memory is ideal. For the rest of us where we have some money and we want good performance levels C4 memory is where it’s at! Today we take a look at a 2GB kit of Kingston HyperX PC2-6400 Low Latency memory, which comes rated at 4-4-4-12. 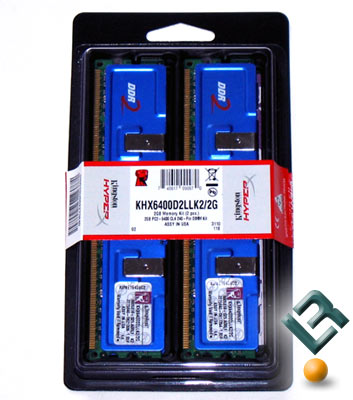 When we started testing the PC2-6400 Low Latency memory kits we actually used two kits of memory and both had different part numbers.  Kingston offers PC2-6400 CAS Latency 4 memory in their standard series and in an NVIDIA “SLI Ready” line that features Enhanced Performance Profiles (EPP).  For this review we tested the memory on Intel’s Bad Axe (D975XBX) motherboard using Presler and Conroe processors, we couldn’t tell a difference between the two different part numbers in terms of overclocking and performance.  Kingston told us that both kits go through the same screening and the only difference in the SLI-Ready memory is the additional SPD programmings for NVIDIA’s chipsets.  For this review EPP is useless as we used on Intel test system, so we will focus on the normal kit.  If you are an AMD user or waiting for NVIDIA’s upcoming 590 SLI Intel edition chipset here are a couple part numbers to keep track of.

From what I can tell both kits use the same IC’s and PCB’s and the only difference is the SPD programming.  The ‘standard’ kit retails for $297 at Newegg, while the ‘SLI Ready’ kit retails for well above $300.

Kingston’s KHX6400D2LLK2/2GN is a kit of two low-latency 128M x 64-bit 1GB (1024MB) DDR2-800 CL4 SDRAM (Synchronous DRAM) memory modules that are NVIDIA SLI-Ready. Both modules are based on sixteen 64M x 8-bit DDR2 FBGA components. Total kit capacity is 2GB (2048MB) which is ideal for high performance platforms. Each module pair has been tested to run at DDR2 800MHz at low latency timing of 4-4-4-12 at 2.0V. The SPD is programmed to JEDEC standard latency 800Mhz timing of 5-5-5-15-2T at 1.9V so you are sure that the system will post every time. The downside to having the SPD programmed to JEDEC standards means that the end user will have to manually set the timings in the BIOS, which is easy to do.