To gauge the performance of the DataTraveler Mini 3.0 it will be connected to a USB 3.0 port on the test system; which uses a Gigabyte GA-Z77X-UP5 TH for its USB 3.0 connections.  We will run three tests on the flash drive, CrystalDiskMark, ATTO and Real World usage to evaluate the performance.

CrystalDiskMark 3.0.2 is a good benchmark to gauge how well a drive will perform.  Many of the drive manufacturers have used this benchmark to show off the performance of their drives.  It provides a quick benchmark of Sequential and Random read/writes, and included a NCQ with a queue depth of 32. 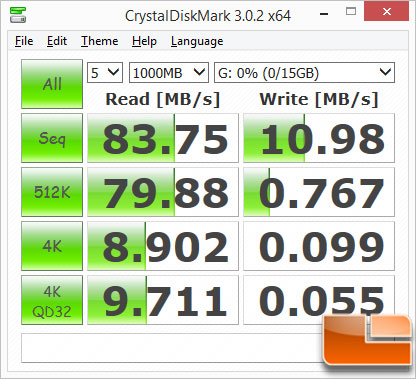 Benchmark Results:  CrystalDiskMark shows the DataTraveler Mini 3.0 performs within the rated specifications.  Actually, the read speed outperforms the 70MB/s specified by Kingston (not that anybody would complain about extra performance).  The write speed is almost exactly what they specified, however it also performed slightly better.

ATTO is another benchmark that will provide results over any type of drive; hard drives, SSD, USB and RAID arrays.  It allows the user to set various factors such as data transfer size, length  of transfer, queue depth and several other options.   ATTO provides a wide range of results across the various lengths, to show how the data compares for the read and write speed. 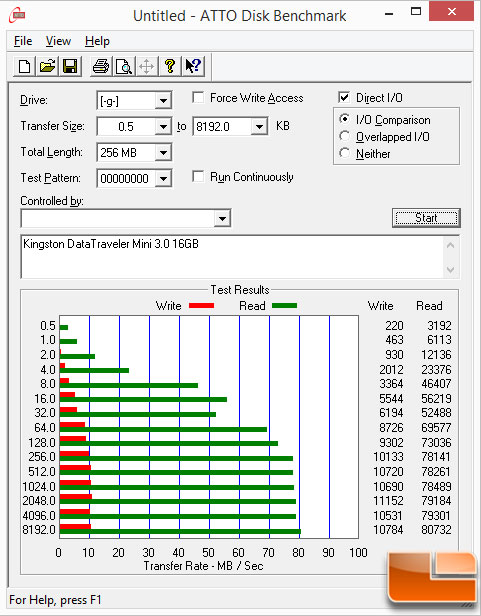 Benchmark Results:  ATTO confirms the speeds received by CrystalDiskMark, the write speed is slightly faster than the 10MB/s specified by Kingston and the read speed reached 80MB/s, which is 10MB/s faster than the specification.

TeraCopy is a great little program that is designed to copy and move files; it includes a timer that is perfect for evaluating file transfer speeds.  For this test, we will be using a 3.4GB folder that contains 287 JPG and MOV files from our CES 2014 trip. 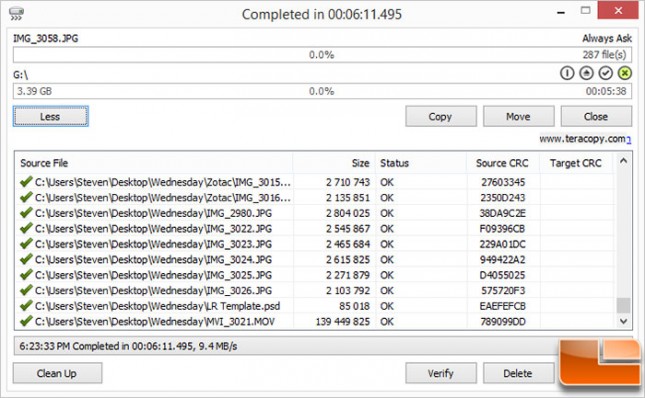 Moving the files from the source drive, an Intel 520 Series 180GB SSD took 6 minutes and 11 seconds, this comes to an average of 9.4MB/s.  This isn’t very fast, however it is close to the 10MB/s that Kingston says to expect. 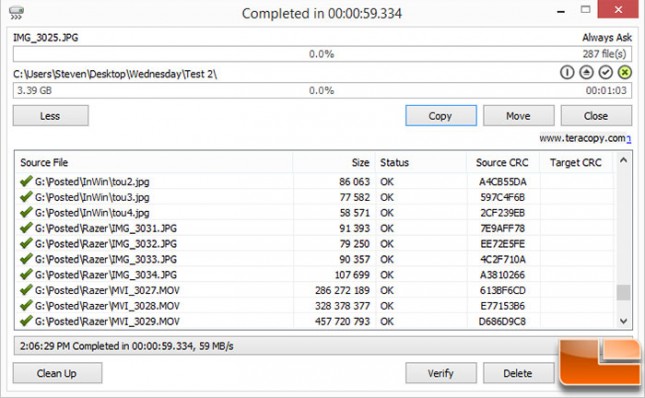 Moving the files from the Kingston DataTraveler 3.0 back to the test system it took just under a minute!  The read speeds are nice, coming in at an average of 59MB/s, slightly slower than the specifications.

Benchmark Results: While synthetic benchmarks showed the maximum transfer rate, the real world testing showed a slightly different picture.  The write speeds came in at 9.4MB/s and the read speeds were 59MB/s.  Not a big change from the stated specifications and the real world results.