The Dell XPS 13 has amazing battery life and it easily lasts over 12 hours with light web surfing, so we didn’t take the time to do a full battery test to the death on each laptop due to time constraints. What we did do was measure the power at the wall during a handful of tasks to see how much power was being used and the results were pretty interesting. 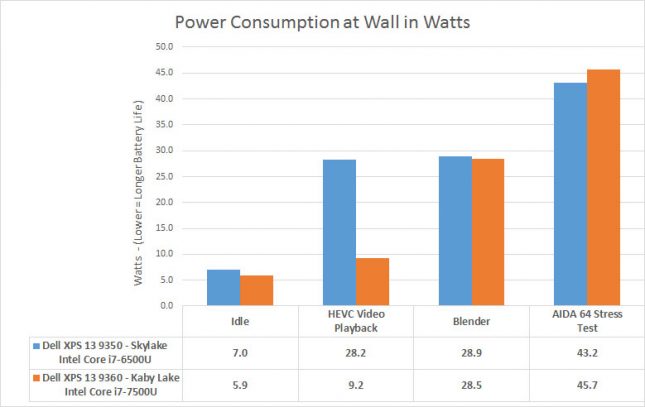 For months we’ve heard people talking about how Kaby Lake is going to suck and that there is no reason to upgrade to it since it’s basically just an updated Skylake processor. We can understand that some people might look at the specifications and minor architecture changes and come to that conclusion, but the benchmark results speak for themselves. Intel was able to work their magic and the higher clock speeds at basically the same power consumption is impressive. The performance gains that Intel has gotten from their 7th Gen Intel Core Processor U-Series at 15W TDP is nothing short of impressive. The Intel Core i7-7500U might only be a dual-core processor with four threads, but thanks to being able to run at up to 3.5GHz those two cores are really responsive and can handle pretty much anything.

The new video decoder block was also impressive and if you want full hardware decode for HEVC Main10 or playback a ton of videos, you’ll want to get Kaby Lake over Skylake for the battery life alone. If someone out there found this article trying to decide between the Intel Core i7-6500U or the Intel Core i7-7500U in a new laptop we hope that you now feel better informed by what you’ll get. The Dell XPS 13 9360 as we have configured is $1,459.99 shipped and you can still buy last years Dell XPS 13 9350 as we have configured for $1,289.98 shipped. There is a $170 price premium for the new model, but it also has an upgraded Killer Network wireless card. If you are a PC enthusiast we think we know what model you’ll be going for.

Let us know if you have any questions below and we really look forward to looking at Kabylake on the desktop in 2017 and to finally get our hands on AMD’s upcoming Ryzen processors in 2017 as well. It looks like 2017 is going to be a great year for processors!