One of the big new features of Kaby Lake is that there is now HEVC hardware encode/decode block in chip. This frees up the CPU and GPU workload and puts it on the new dedicated hardware that was designed to run it from the start. To test this new feature, we played Tears of Steel (4K, 24 FPS, 20mbps 10-bit HEVC (H.265) video file in full screen mode using the default Windows Movies & TV app that comes in Windows 10 Anniversary Edition. While this was playing we recorded what the CPU and GPU was doing during video playback and got some very interesting results. 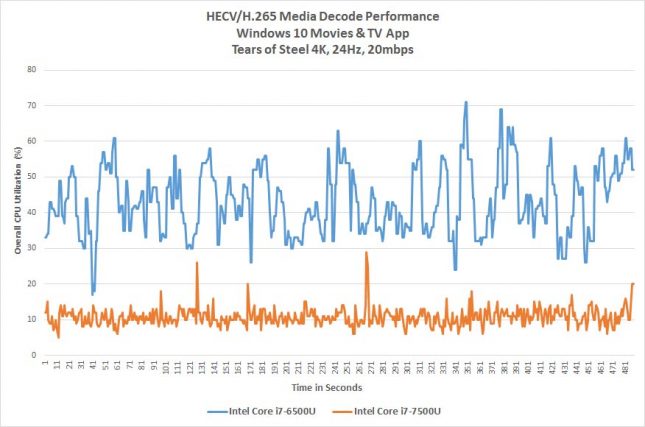 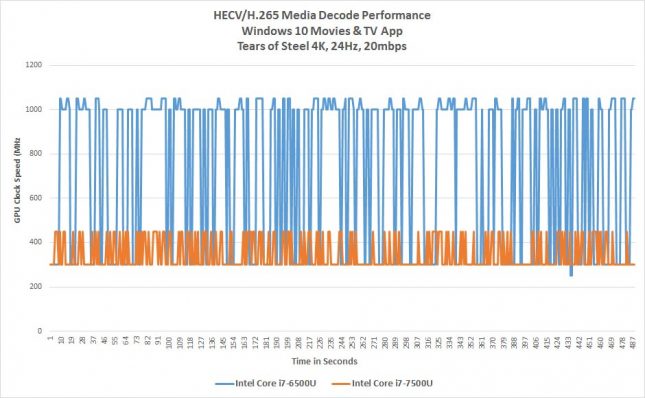 The take home message here is that if HEVC/H.265 video encode/decode performance is a point of concern for you, then you’ll want to go with an Intel 7th Gen Kaby Lake processor for the additional decode block that was added this generation. This is a big deal for mobile users as the lower CPU utilization and GPU clock speeds means that you’ll have greatly improved battery life when watching videos. Kaby Lake also supports Google’s upcoming VP9 video coding format, so Intel 7th Gen Core processors are clearly the way to go for H.265 and VP9 video codecs.