Jabra SP700 Setup and Use

Before you use the Jabra SP700 for the first time you need to let it charge for 2 hours. This is where the USB 2.0 cable comes in handy; instead of having to run out to the car to plug it in and charge you can hook it up to your own computer’s USB port. 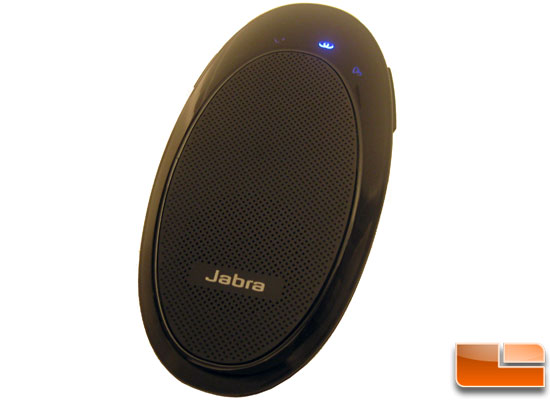 The next step is to pair your Bluetooth compatible phone to the Jabra SP700. When you initially turn on the unit it is automatically in pairing mode. You will know this because the Bluetooth icon on the front of the unit will be flashing. Once the phone is paired with the Jabra SP700 the blue light will remain solid like shown in the image above.

We had no troubles pairing the Jabra SP700 to our Apple iPhone 3GS, Blackberry Bold or the Samsung Black Jack. It should be noted that the Jabra SP700 does not work with two phones as it can only be paired with a single phone at a time. This is critical to point out as many people have a work phone and a personal cell phone.

The two main ways to use the Jabra SP700 is through your car’s radio speakers or the speaker on the device itself. To use the FM function you must first hit the FM button on the left side. The unit will announce the FM frequency to turn your radio to. It should be the same station every time but if for some reason there is interference on that particular station you can manually change the frequency yourself with the volume up and down button located on the right side of the unit.

The FM transmitter on the unit will automatically turn off after 10 minutes of continuous non-usage. If the phone should ring when the FM transmitter is off you can utilize the speaker on the Jabra SP700 itself. The only downside that we can see to using the FM transmitter mode is that either your music or conversation has the potential to be picked up by another radio in the close vicinity to your car. However that risk exists when using any cellular or Bluetooth capable device. 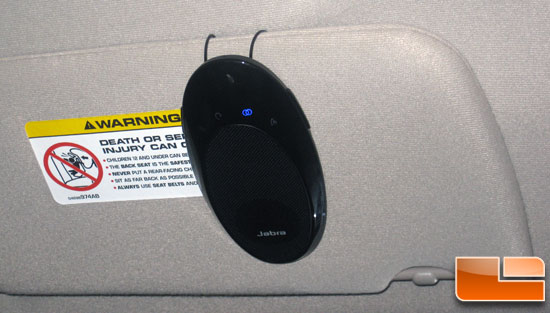 On the back of the SP700 is a large metal clip that you can use to attach to your car’s visor. If you don’t want to use the clip you could always take it off and put it another place. It should be noted that the Jabra SP700 can also stream music, but there aren’t any music controls on the device itself – you’ll have to manage that from the phone. One of the best features of the SP700 is that it gives you voice announcements that keep you informed on the speakerphone’s status. It will let you know when it’s powered on, when it’s powering down, when it’s paired, and when the FM is enabled. It will also announce the incoming caller ID, which is a great feature that other car kits like the BlueAnt S1 don’t have. If you have FM transmission enabled at the time of an incoming call, the caller’s number is actually displayed on your radio using RDS (Radio Data System) if you have a radio supporting this feature. The Jabra SP700 can provide voice announcements in up to 10 different languages, so if you don’t speak English you are in luck.

When receiving incoming calls the Jabra SP700 has a slight delay of roughly 1-2 seconds where you can’t hear what the incoming caller is saying. When dialing out there doesn’t seem to be a delay, though. Doing 70 MPH on the highway with the car windows up, the audio quality for the other person that you are talking to sounded great. With the windows down they can hear your general wind and highway noise, which we discovered is overpowering if a semi or large truck passes as that is all that they will be hearing. Incoming calls on the device sounded pleasant and crisp with plenty of volume on the SP700. If you are using the Jabra SP700’s FM function it sounds fine to the other person that you are talking with, but will sound tinny and metallic on your end. Overall, the audio quality leans a little to the tinny side on FM mode, but the Jabra SP700 audio is crisp on the device’s own speaker.

Finally, we found out about one neat feature that is said to be unique to the Jabra SP700. If the unit’s blue LED lights are annoying, particularly at night, you can take advantage of its night-driving mode. Pressing the FM button and Volume Up button at the same time turns off the device’s blue lights completely. This is a nice feature for those that are bothered by lights or do a significant amount of night driving.