The “Tick-Tock” microprocessor strategy was adopted by Intel Corporation in 2007 and for nearly a decade it has been fun to watch Intel churn out advances in process technology and processor microarchitecture in alternating ‘tick’ and tock’ cycles. With every ‘tick’ cycle, Intel moved to an advanced manufacturing process technology to deliver the expected benefits of Moores Law to users. In the following ‘tock’ cycles, Intel used the previous tick cycles manufacturing process technologies to introduce new processor microarchitecture advancements for efficiency, performance and of course new features (hardware-supported video transcoding, encryption/decryption, and other integrated capabilities). 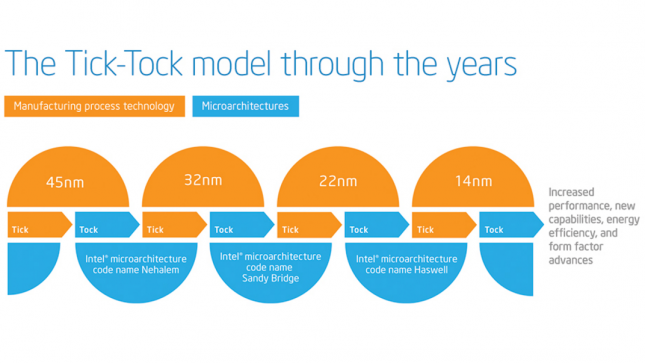 Back in 2014 when Intel did the Haswell refresh or ‘semi-tock’ on the desktop processor lineup the Tick-Tock model was rocked. No one knew exactly what to expect, but delays at Intel spread out the roadmap and the Haswell refresh added some additional microarchitecture features while the process node remained the same. Many expected the refresh to be a one time deal, but when Intel announced Kaby Lake as the refresh for Skylake it was clear that the tick-tock model was done. When Intel moves on to the 10nm processor node they have already announced that Cannonlake will be the ‘tick’ in 2017, the ‘tock’ will come in Ice Lake in 2018 and the Ice Lake refresh will be Tiger Lake in 2019. That means the 22nm, 14nm and 10nm process nodes will have all featured the three step [rocess -> architecture -> optimization microprocessor strategy versus the old process/architecture model seen with Tick-Tock.

The official wording used in Intel’s 10-K filing is as follows:

Intel has released a new infographic to show off the current process technology they are employing, but didn’t mention how this impacts Moore’s Law. Moore’s Law, created by Intel’s Gordon Moore, states that transistor density will double every 18 to 24 months. By Intel doing away with the 2-year per process model, it looks like Moore’s Law that was created in 1965 is going to be coming to an end. Then again they could just change the law as it originally stated that the number of transistors per chip would double ever 12 months and in 1975 the law was changed to 24 months instead of the initial 12. Moore’s Law proved to be correct and stuck around for 51 years making it one of the most known computing principles ever created.