The folks over at BenchLife are saying that Intel’s 14nm Kaby Lake and 10nm Cannon Lake mobile processors are still on track since Cannon Lake was pushed further out in 2015. They back up the claims with an image of a presentation slide that doesn’t appear to be marked confidential showing Kaby Lake being released in Q3 2016 and Cannon Lake in Q3 2017. 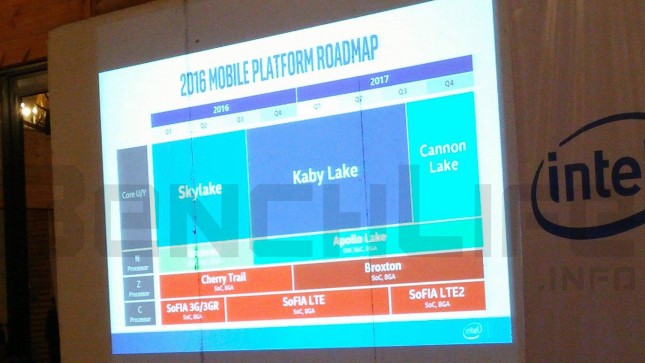 Kaby Lake is basically a Sky Lake refresh that will add native USB 3.1 support, native HDCP 2.2 support and full fixed function HEVC Main10/10-bit and VP9 10-bit hardware decoding. This slide is referring to Intel’s mobile platform, but we expect desktop processors to be updated around the same time. There will likely be a refresh of Intel Z170 desktop motherboards at this time to take advantage of the new features. Cannon Lake (formerly Skymont) is Intel’s codename for the 10nm die shrink of the Skylake microarchitecture. Cannon Lake is expected be used in conjunction with Intel 200 Series chipsets, also known as Union Point and will be the next major update for Intel.