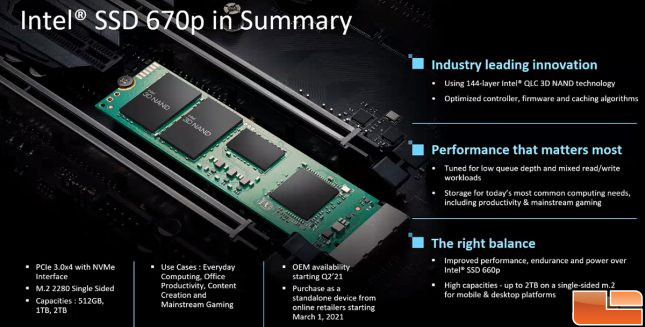 The target user for this drive are mainstream computing users and can certainly be viewed as a 660p and 665p series replacement. That is because Intel says the 670p delivers a 2x sequential read and a 20% endurance improvement compared to the original 660p!

The performance between 670p models differs slightly depending on the capacity that you purchase, so we tossed together a quick table to show you the key differences. Pricing on the Intel SSD 670p series ranges from $0.15 to $0.17 per GB depending on the drive that you are looking at buying. Newegg currently offers the Intel 670p 2TB model for $249.99 shipped, the 1TB model is $129.99 shipped, and the 512GB model is $69.99 shipped. Street pricing is much lower than Intel’s Suggested Retail Pricing (SRP).

The performance on the 670p 512GB is about half of that in some areas when compared to the 670p 1TB model. So, paying more might get you 1x the performance and storage space. Intel. with a standard 5-year warranty on this series and the endurance rating is okay at 185 TBW for every 512GB of storage space. These are QLC-based drives, so the write endurance will not be as high as TLC-based models. 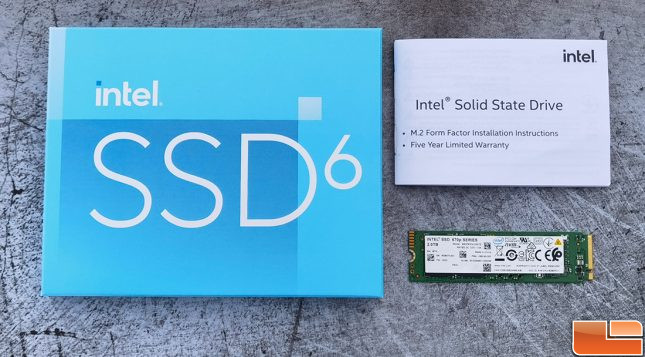 Intel sent Legit Reviews the 670p 2TB version to try out and that makes sense as it is the fastest drive of the series. The full part number on our test unit was SSDPELNU020TZ.

This is a mainstream NVMe SSD that is targeted at everyday users, so you are looking at a drive with a green PCB and no heatsink. The label is actually just a normal paper label that has no thermal conductive properties. All Intel SSD 670p NVMe drives are single-sided as use the M.2 2280 form factor.

No components are found on the back of the drive, so it will work in fine in all M.2 slots be it in notebook or desktop PCs.

Warranties don’t come on our review samples, so we removed the label to reveal what is hidden underneath. The first thing we discovered is the SM2265G controller from Silicon Motion. This is the first time that we have seen the SMI SM2265 controller on a drive before.

Next to the controller we can see the Nanya Technology NT5CC128M16JR-EK dedicated DRAM chip. This part number comes back as being a DDR3 model that is 2GB in density and running at 1866 Mbps. Further over to the right you see one of the two Intel 144-Layer QLC NAND Flash packages. 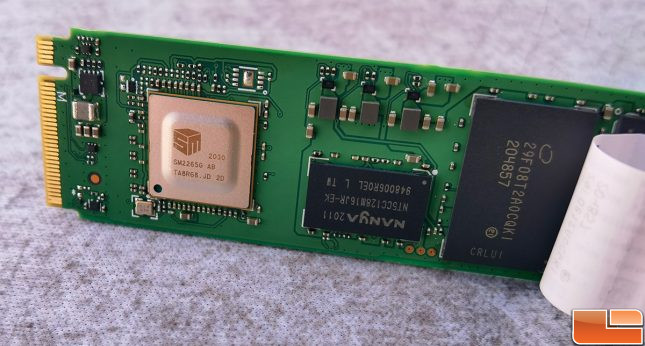 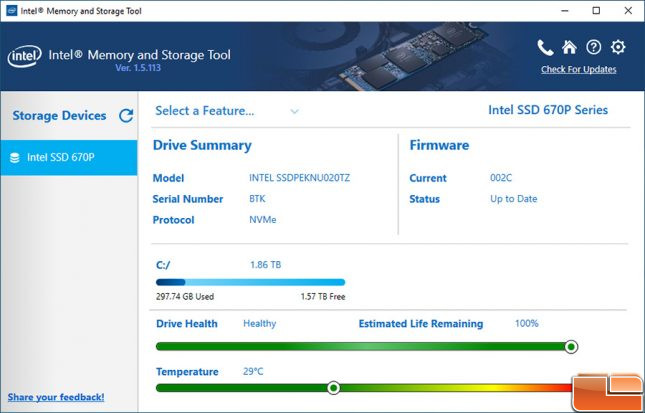 The Intel Memory and Storage Tool (Intel MAS) is drive management software with a Graphical User Interface for Windows that allows you to view current drive information, perform firmware updates, run full diagnostic scans, perform secure erase processes, and provide SMART attributes from Intel SSDs. It was redesigned in January 2021 and has a fresh new interface. It has the same basic functionality as the old Intel SSD Toolbox, but looks better. 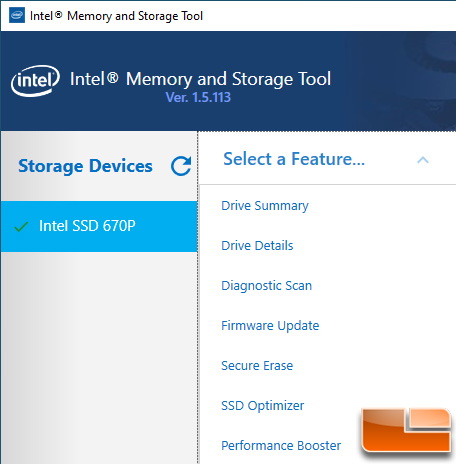 By clicking the ‘Select a Feature’ drop-down menu you can access all the menus that should be familiar to previous Intel SSD owners. 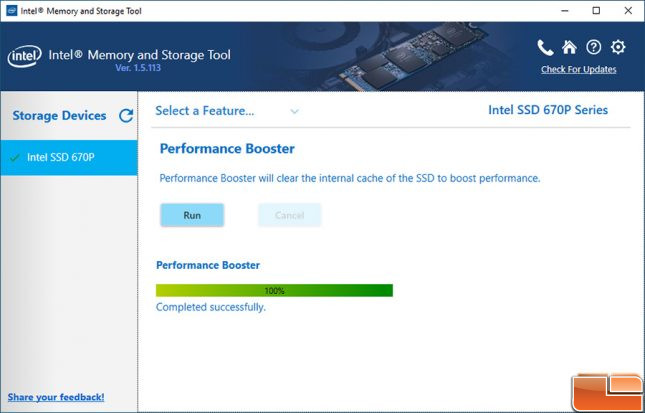 The ‘Performance Booster’ menu is one that people might not be familiar with. This clears the internal cache of the SSD to boost performance. 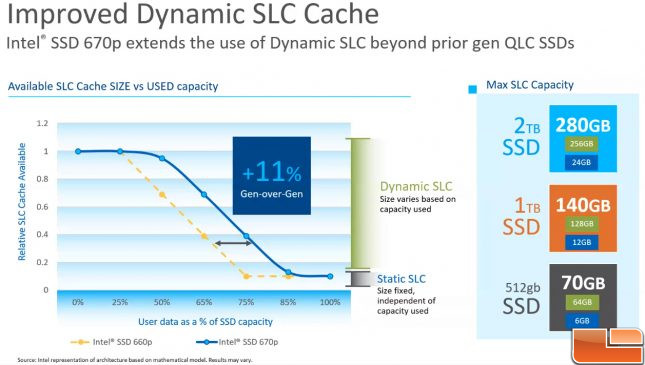 The dynamic SLC cache solution used on the Intel 670p is variable and the size of it is tied to the unused capacity of the SSD. All data writes must go through the high speed SLC cache and this ensures faster data writes through the full span of the SLC cache. When the cache nears full capacity the drive firmware moves the data from the SLC cache into the available QLC Flash cells. This also takes place while the drive is at an idle state to ensure you have the best user experience when it is next used. Each drive has a dedicated static SLC cache for when the drive is filled or nearly filled.

On the 2TB drive that we are reviewing today, it has a 24GB static cache and a 256GB dynamic cache. So, on an empty or nearly empty drive there could be as much as 280GB of SLC cache for faster sequential and random data writes. The chart above showed how much SLC capacity each Intel SSD 670p model has.

Buying a larger 670p drive will not only give you more storage space, but it gives you better raw performance that we already talked about and a larger SLC cache!

Let’s move on and see how this 2TB Intel SSD 670p does in the benchmark tests.