The New Technologies and Features 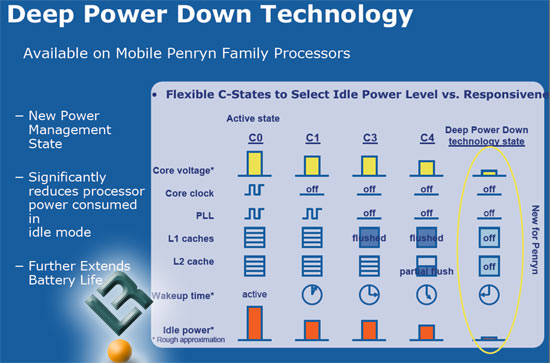 The mobile Penryn processor has a new advanced power management state called Deep Power Down Technology that significantly reduces the power of the processor during idle periods such that internal transistor power leakage is no longer a factor. This helps extend battery life in laptops. This is a major advancement over previous generation industry leading Intel mobile processors. 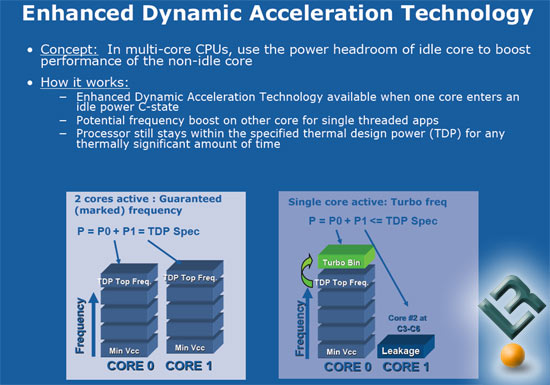 For the mobile Penryn processor, Intel has enhanced the Intel Dynamic Acceleration Technology available in current Intel Core 2 processors. This feature uses the power headroom freed up when a core is made inactive to boost the performance of another still active core. Imagine a shower with two powerful water shower heads, when one shower head is turned off, the other has increased water pressure (performance). By doing this Intel is able to increase performance by more efficiently using what is available to them. 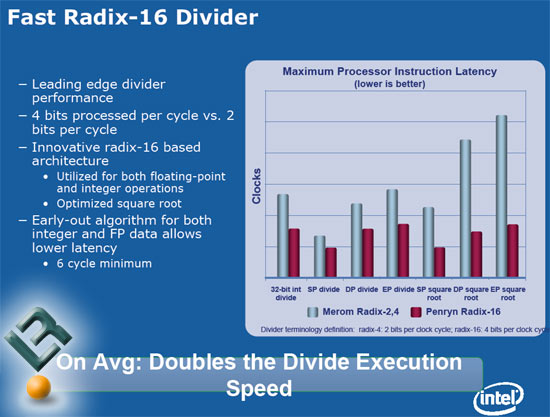 Penryn-based processors provide fast divider performance, roughly doubling the divider speed over previous generations for computations used in nearly all applications through the inclusion of a new, faster divide technique called Radix 16. The ability to divide instructions and commands faster increases a computer’s performance. This increase in divider speed in Penryn Radix-16 helps out both floating-point and interger operations, which is enough double the performance of the Intel Merom processor with Radix-4. This is expected though as the bit per clock cycle has been doubled from 2 bits to 4 bits. 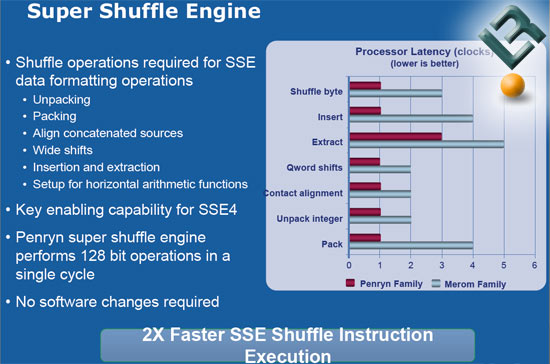 By implementing a full-width, single-pass shuffle unit that is 128-bits wide, Penryn processors can perform full-width shuffles in a single cycle. This significantly improves performance for SSE2, SSE3 and SSE4 instructions that have shuffle-like operations such as pack, unpack and wider packed shifts. This feature will increase performance for content creation, imaging, video and high-performance computing. One of the nice things about this new shuffle operation is that no software change is required, which is great for programmers.

It is great to see Intel come out and talk about their upcoming roadmap, but as always we can’t come to any conclusions until we have products in out hand!  We will be reporting more news on Penryn and Nehalem  comes available in the months ahead!