Intel Briefs The Press on Penryn and Nehalem Processors

Marking the next step in Intel’s “tick-tock” product strategy and cadence to deliver a new process technology with an enhanced microarchitecture or entirely new microarchitecture every year, Intel Corporation will begin producing its next-generation Penryn family of processors in the second half of this year. These new processors benefit from enhancements to the Intel Core™ microarchitecture and also Intel’s industry-leading 45nm Hi-k process technology with its hafnium-based high-k + metal gate transistor design, which results in higher performance and more energy-efficient processors. 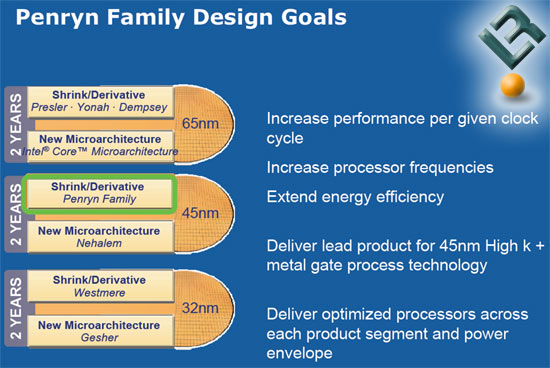 Intel has more than 15 45nm Hi-k product designs in various stages of development, and will have two 45nm manufacturing fabs in production by the end of the year, with a total of four in production by the second half of 2008 that will deliver tens of millions of these processors. Below are many of the details of the Penryn processor family and a glimpse into some of the key features of Intel’s future generation of processors, codenamed Nehalem. 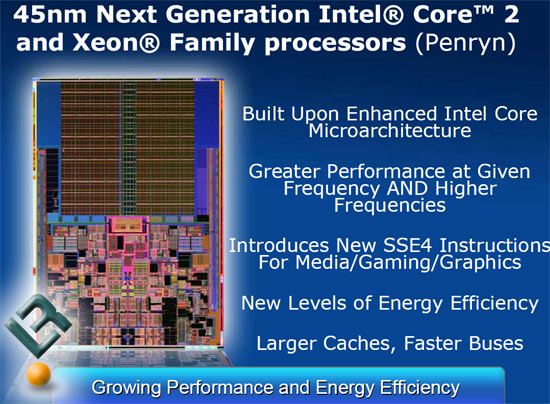 The 45nm next-generation Intel Core 2 quad-core processors will have 820 million transistors. Due to Intel’s high-k metal transistor invention, think of 820 million more power efficient light bulbs going on and off at light-speeds. The dual-core version has a die size of 107mm2, which is 25 percent smaller than Intel’s current 65nm products — and quarter of the size of the average postage stamp — and operate at the same or lower power than Intel’s current dual core processors. 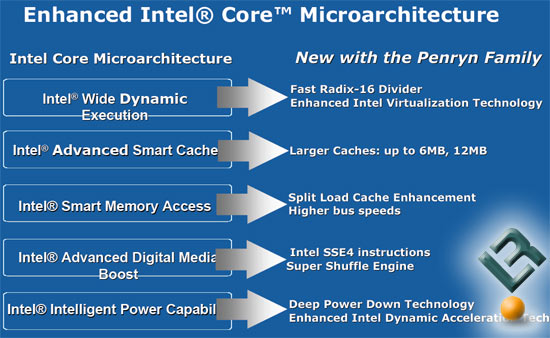 Penryn processors include up to a 50 percent larger L2 cache with a higher degree of associativity to further improve the hit rate and maximize its utilization. Dual-core Penryn processors will feature up to a 6MB L2 cache and quad-core processors up to a 12MB L2 cache. Cache is a memory reservoir where frequently accessed data can be stored for more rapid access. Larger and faster cache sizes speed a computer’s performance and response time. 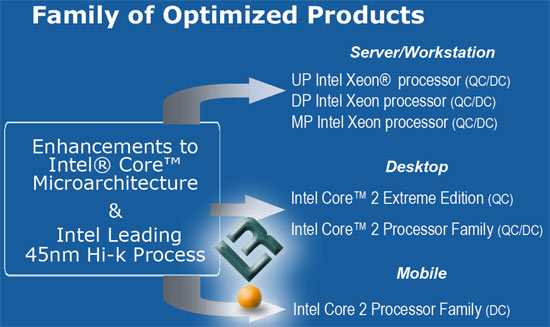 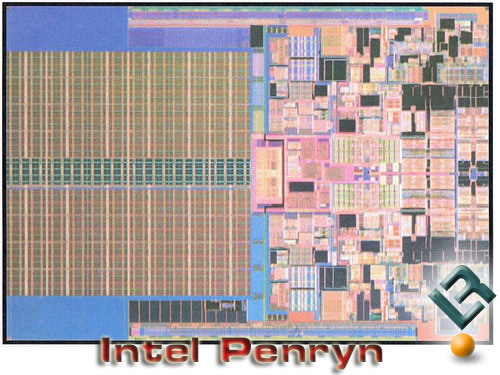 All of these features and cache are jam packed into the single piece of silicon that makes up the processor. Above is the die photo oh Penryn for those that would like to see what it looks like. Intel has a number of these processors already up and running and just today showed the media a technology demo that included games on a Windows XP Professional platform using Penryn.