Inside the Intel NUC Kit D54250WYK for Haswell 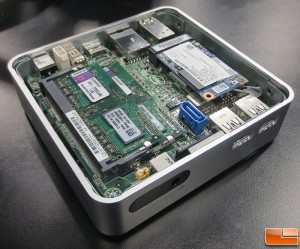 Inside the NUC Kit D54250WYK you’ll find the Intel NUC Board D54250WYB. This board supports dual-channel DDR3L memory with two slots for 1600/1333 MHz memory modules. Intel says that this NUC will support up to 16GB of SO-DIMM memory, so get those 2x8GB memory kits ready! You also have one PCI Express half-mini card connector and a PCIe full-mini card connector to fulfill your SSD and Wireless card needs. With the release of Haswell CPUs, Intel also released new wireless cards. The Intel Dual Band Wireless-AC 7260 is now the flagship WiFi card from Intel and is the way to go if you want 802.11ac support. 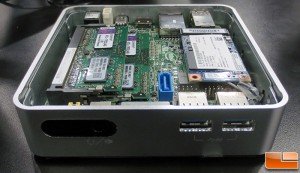 Intel also included a single SATA III header, so you can add another storage drive or an optical drive if you wish. The only issue is that there is no way to fit something like a 2.5″ SATA storage drive in this super small enclosure. It would have been nice if Intel included enough room for a 7mm z-height drive, but that didn’t happen. Even if they did include a way to mount a drive in this chassis, they don’t have a way to power it. The 65W power adapter that comes with the NUC Kit is nearly maxed out as it is and adding more devices isn’t really an option. What do you do for that?

Intel is working on a NUC model that supports 2.5″ drives, but for now you’ll have to rely on solutions from 3rd party companies like Chebro.

The Intel NUC case from Chenbro is called the Chenbro Cubicom200 and it is available in various colors, designs and even has an option for an interchangeable rear window. 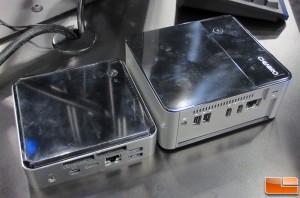 Intel did not have the Chenbro NUC chassis on display for Haswell, but they did have one for the Ivy Bridge NUCs that are currently on the market right now. As you can see the chassis is much thicker and longer, but you need the extra room for the 2.5″ SSD or HDD, mounting system and of course the SATA data and power cables. 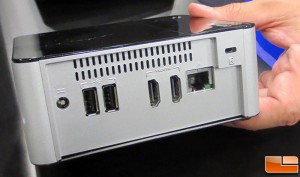 We wouldn’t be surprised if we see the Haswell versions of the NUC hitting the streets sometime in late October 2013. It feels like that is still so far away, but it will be here before you know it. Intel wouldn’t give us any information on pricing, but we expected them to be around the same MSRPs as the original Ivy Bridge NUCs. So, expect to see something in the $329-$399 price range for the kits!

There might also be a version coming out with Intel’s Iris Pro 5200 graphics inside, which would make for one heck of a desktop PC!

After playing some games and getting spend some time with the new NUCs we couldn’t be more excited about them coming to market. The added USB 3.0 ports and SATA III header were much needed and we are glad to hear that the heat concerns were addressed by a beefed up heatsink. The original NUC did very well, but we expect the Haswell versions to see even better!

Expect to hear more about these systems at IDF 2013, which takes place in San Francisco in just a couple weeks! 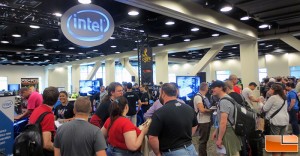