Legit Reviews is down in Dallas, Texas for Quakecon 2009 and we got a nice little surprise when we arrived. At the Intel booth they are showing three of their four upcoming P55 Express chipset based motherboards here at the show. On display are the DP55KG, DP55WG and DP55SB motherboards. These boards are scheduled to be launched next month according to sources at the show, so enjoy this little sneak peak at what Intel is cooking up for this brand new platform. 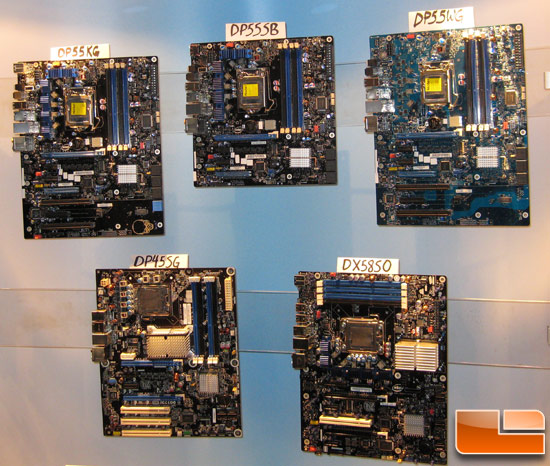 The DP55KG and DP55WG are Full-ATX form factor boards, codenamed Kingsberg and Whitesberg, respectively and the the Micro-ATX DP55SB in the middle is codenamed Warrensburg. Let’s take a closer look to see what these three P55 boards are all about. 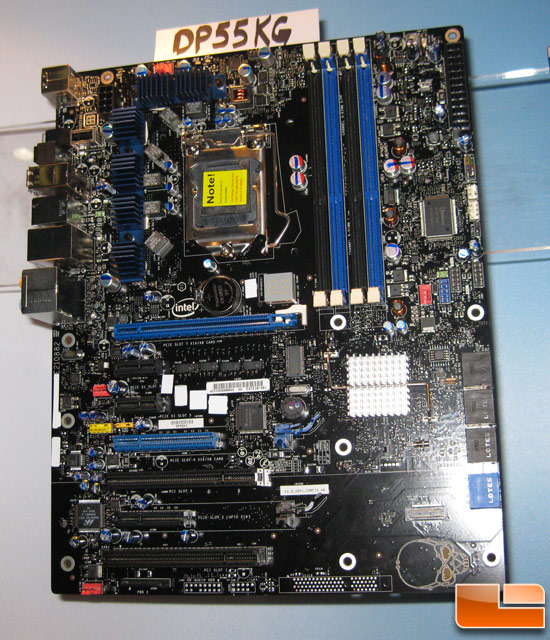 The Intel Extreme Series DP55KG ‘Kingsberg’ motherboard is the highest end motherboard that Intel will be offering with the P55 Express chipset. The board has a very clean layout and features six phase power management. Right now there is a debug port located just to the left of the blue SATA header, but that will be removed on the production boards. The board features a x16 PCI Express slot and a x8 PCI Express slot for graphics cards and has been licensed to support both ATI CrossFire and NVIDIA SLI multi-GPU technology. The board has a pair dual-channel DDR3 memory slots as these boards do not use triple-channel like the Intel X58 Express platform does. The motherboard also features on-board Bluetooth and has a location for an antenna to be attached. One interesting thing about this flagship motherboard is that Intel is still not using solid-state-capacitors on their enthusiast motherboards. This is something worth pointing out as companies like ASUS, Gigabyte, and MSI have all switched over to better components in recent years.

The rear I/O panel on the Intel DP55KG ‘Kinsberg’ motherboard is packed full of goodies.  Starting from the left you’ll see two eSATA headers, which is a nice touch. Just to the right of that is a little button.  This is the Back-to-BIOS switch, which can be used to recover the BIOS if your overclocked settings fail to work out for you. After that, you can see the S/PDIF in/out connectors, eight USB 2.0 headers, 1334 Firewire and then all the audio jacks for the Intel High Definition Audio (7.1 Dolby Home Theater support). 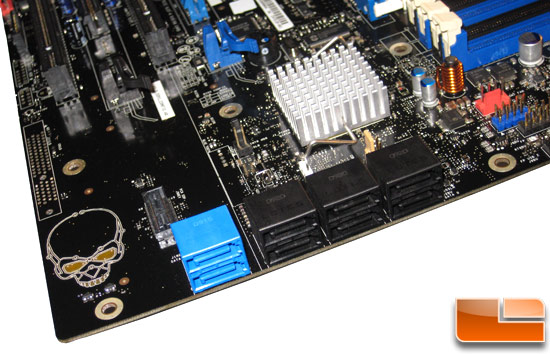 One of the big complaints on Intel branded boards is that they didn’t rotate their SATA headers 90 degrees to have them coming off the side of the motherboard. Intel has finally listened to consumers and has added these modern headers on all of their P55 boards. 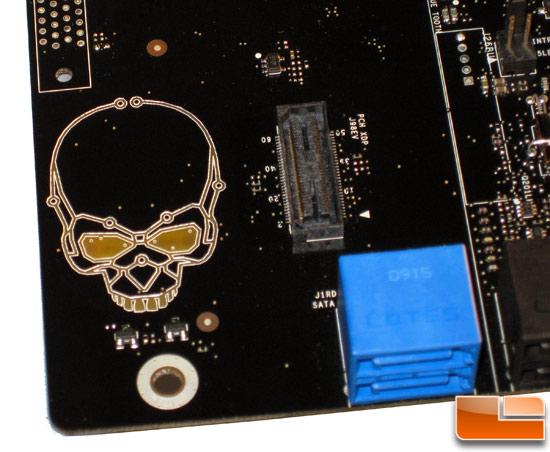 The Intel Extreme motherboards usually have a skull on them and the Intel DP55KG ‘Kinsberg’ motherboard is no different on that front. The skull is actual back-lit with LED lights and the outer skull is a different color than the eyes of the skull. Intel actually put a lot of time and effort into this skull as the eyes act as activity lights for the storage drive. Intel informed us that you can adjust how the lights work in the BIOS. If you want to shut them off you can disable the feature in the BIOS as well. 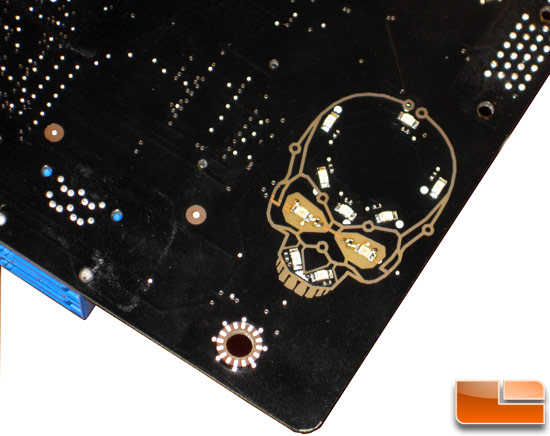 Turning the board over you can see the 10 LED lights that bring the skull to life when the system is powered up.