Intel announced late last year that they would be rolling out a handful of new processor models that have AMD Radeon RX Vega GPU graphics with HBM2 memory on the same chip package as the Intel Core processor. This was exciting news as it means that we should see more capable gaming notebooks and desktop processors arriving for the enthusiast market. If you are a gamer or a power user the thought of an 8th Gen Intel Core processors with Radeon RX Vega M Graphics likely grabs your attention.

This announcement is also a big deal for Intel as it is their consumer product that uses EMIB (Embedded Multi-Die Interconnect Bridge) technology for high-speed communication between multiple chips. EMIB technology uses a very small bridge die embedded as part of  the substrate with multiple routing layers rather than traditional solutions that likely use a silicon interposer and Through Silicon Vias (TSVs) for the task. This cuts down on production costs and should help performance degradation issues.

Let’s take a look at some performance numbers!

The first performance slide we were given by Intel has a 3-year old system with an Intel Core i7-4720HQ Processor (6M Cache, up to 3.60 GHz) and an NVIDIA GeForce GTX 950M discrete graphics solution against an 8th Gen Intel Core processor with Radeon RX Vega M GL graphics. Intel showed up to 2.2x better graphics performance in 3DMark 11 and 6.7x faster performance on CPU intensive transcoding tasks on Handbrake.

If you switch over to an 8th generation Core i7 with Radeon RX Vega M GH graphics you’ll see up to a 2.7x improvement in the 3DMark 11 graphics test! In real game titles, Intel was showing 2.0-2.7x FPS improvements and more importantly they were over 60 FPS in game titles like Hitman, Verminetide 2, Total War: Warhammer and Rise of the Tomb Raider.

The final glimpse of performance was an 8th Gen Intel Core i7-8809G processor with Radeon RX Vega M GH graphics versus an Intel Core i7-7700HQ with GeForce GTX 1060 Max-Q 6GB graphics solution. Intel was showing that they have a 7-13% performance lead here too. 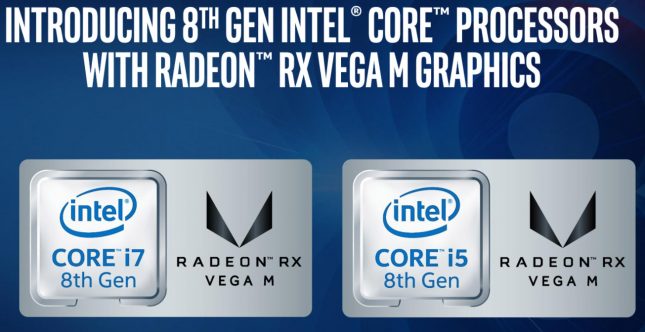 What does this all mean? It means that Intel will be able to pack a ton of CPU and GPU into a package smaller than OEMs are used to having access to. This means we’ll see more powerful gaming notebooks that could be only 17mm thick and still get nine hours of battery life. It also looks like 8th Gen CPUs with Radeon RX Vega M graphics solutions will be able to play most popular eSports titles at respectable frame rates and image quality settings. That is critical and a market that Intel would like to be a leader in. The only downside to these new processors is that despite the 8th Gen name, these are basically Kaby Lake CPU cores from last year. We can’t wait to benchmark these processors though as they should be gaming beasts! We also wouldn’t mind trying out cryptocurrency mining as it will be interesting to see how Intel handles the graphics drivers. Will they leave the blockchain performance features in the drivers or remove them?