What Intel 7260 Wireless Card Should You Get?

Do you want a new wireless card in your laptop or desktop PC? Last year Intel released their first 802.11ac wireless card and you can purchase one for under $30, which makes it a rather inexpensive upgrade for your system. The vast majority of laptops and desktops that already support wireless network cards and the existing antennas can be reused. This means that you can easily upgrade your 802.11n or older wireless card with a newer 802.11ac card if you wanted to do so. All you really need to know is if your platform uses a PCIe Half Mini Card or the new M.2 NGFF style as Intel offers each card in both versions.

Intel came out with five new wireless cards in 2013 and it can be tough to figure out the differences between each of the cards. We poured over the Intel product briefs for the popular PCIe Mini Card Slot (Half Length) and came up with the table below to help you figure out which is best for your system.

Today we’ll be trying out the cost effective Intel Wireless-N 7260 card versus the Intel Dual Band Wireless-AC 7260 card. This pits the cheapest part versus the most expensive, but we just wanted to see how the real world performance differs at different distances in the home. We all know that the maximum speed ratings on these cards are just theoretical maximums, so let’s see if there is any upload and download speed differences in our testing.

We’ll be testing out these cards on the Intel NUC DN2820FYKH, which is the lowest priced NUC and it just happens to come with the Intel Wireless-N 7260 wireless card in the $128 suggested retail price. We’ll test out that card and then see what happens when we upgrade that card to the Intel Dual Band Wireless-AC 7260 card ( Intel 7260HMW ). 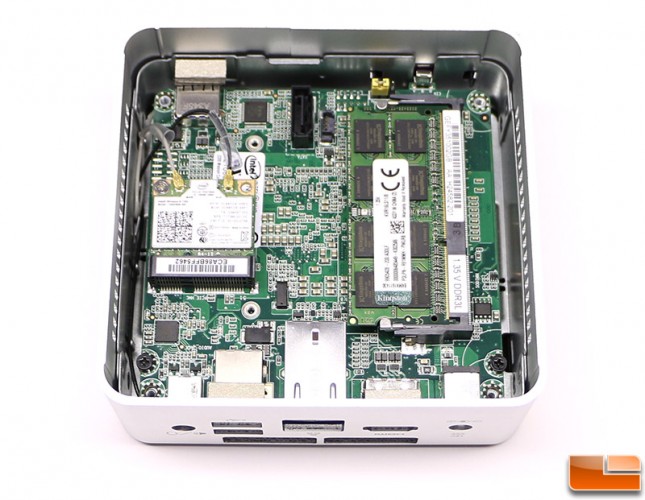 Installing the wireless card is very simple. You just need to remove bottom case cover from the NUC along with the drive tray and then you’ll have access to the Mini PCie wireless card. After pulling off the two antennas all you need to do is remove the screw holding the card down and you can swap it out with a new one and then reverse the steps. Let’s take a look at the performance of the Intel Wireless-N 7260 Card versus the Intel Dual Band Wireless-AC 7260 Card.