Did you hear that Intel would not be releasing a Broadwell processor lineup for their LGA1150 desktop platform? We heard that Intel would not be doing one, but a slide that has been leaked overseas tells a different story.  If the slide is real, it shows what Intel is planning on releasing in 2014 and even part of 2015. According to the new roadmap there will be a Haswell Refresh taking place in the first half of 2014.  This refresh will include bringing the Intel 9 series chipset to market and likely some new processors! This confirms that Intel has changed their mind about not offering socketed desktop processors beyond the Haswell Refresh!

The most interesting this on the slide is the introduction of Broadwell-K processors in late 2014. Details are sketchy, but from what we gather Intel’s 9-series chipsets will support both Broadwell (BRW) and Haswell Refresh (HSW-R) microprocessors, but will lack support of current-generation Haswell processors. This is due to the fact that the 4th Generation Core i processors have an integrated voltage regulator (Intel calls this FIVR: Haswell’s Fully Integrated Voltage Regulator.) It appears that Intel has moved this back off-die and back onto the motherboards, in an attempt to reduce the heat produced by the processor. This means that those building Intel Haswell platforms today with the 8 series chipset could end up with no upgrade path when it comes to the processor. This is certainly not good for enthusiasts that always like to have an upgrade path, especially on a brand new socket.

There is a glimmer of hope though that this is not the case. Notice that the business class shows the Haswell Refresh and the 8 Series Chipset is still listed. If the Haswell Refresh is shown to be compatible with the 8 series chipset why wouldn’t it be on the consumer side? This could be just a typo or show that the entire slide is fake. 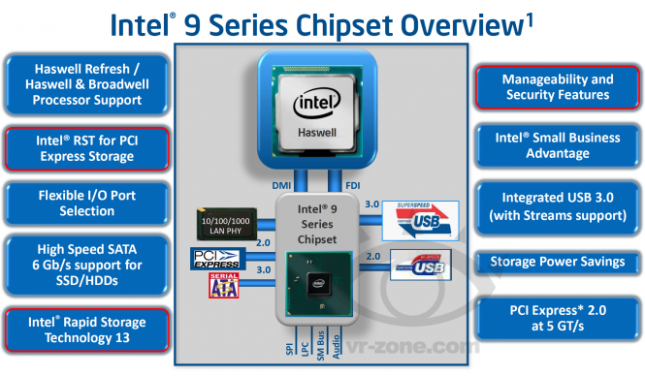 The Intel 9-series chipsets will likely consist of the Z97 Chipset for high-end enthusiasts and the H97 Chipset for mainstream consumers.  It is believed that the new ‘must have’ feature on these boards will be SATA Express support. SATA Express will significantly improve SSD speed as it will eliminate the bottleneck that current Solid-State drives have on the SATA III 6Gb/s interface. SATA Express uses up to two PCI Express 3.0 lanes to offer a peak transfer rate of 16Gb/s, or 2GB/s, compared to SATA 3’s 6Gb/s! That right there alone is more than enough reasons for enthusiasts and gamers to want an Intel 9 series platform!