On the front of the controller for the BH1001 headset there is a multi-function button that handles power duties in addition to pairing functionality.  There is also a small microphone port and LED status indicator right above the multi-function button.  The Inateck logo is printed along the front of the controller in an unobtrusive, small white font.

The rear of the controller features multi-function buttons that control volume and track selection.  The controller itself is small and durable, causing no concern that it would break during use and the controller handled several drop tests onto cement without issue and didn’t exhibit any signs of abuse other than some light scratches. 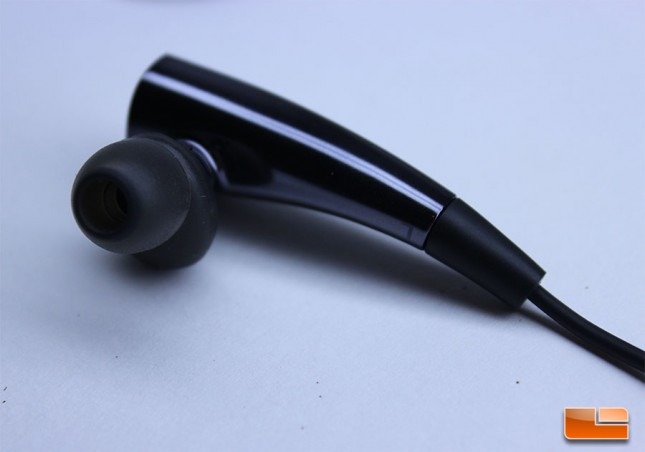 The earbuds themselves are constructed from plastic and are horn shaped.  They have a magnet in the top of them so that they can be snapped together, allowing the BH1001 to be worn around the neck while not in use. This is a really cool feature that was well thought out by Inateck and one that I think users of this headset are going to really appreciate and take advantage of, as it is a real time saver and convenience. 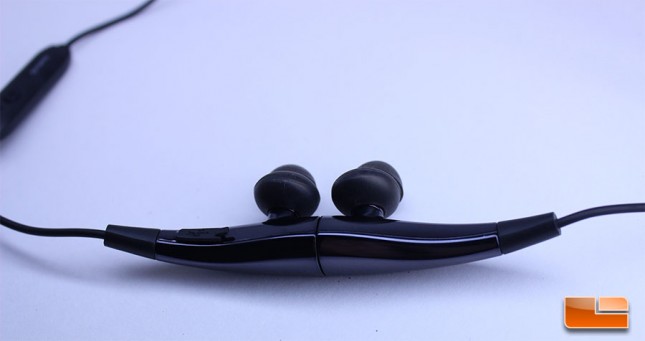 The wire on the earbuds that connects to the controller is lightweight and thin, but seemingly durable.  I gave a decent tug to the ends of the cables where they connect to the remote and there were no issues.  A few light tugs where the wire connects into the plastic earbuds also yielded refreshing results, as everything stayed together without issue.  Once the earbuds are snapped together via magnet, they stay together well, lending themselves to being worn as a necklace. 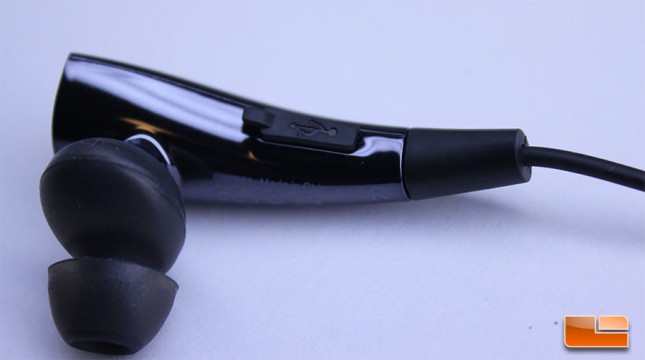 On the right earbud there is a connector for charging the BH1001 headset via USB 2.0 cable.  Charge time takes a couple of hours, which isn’t bad considering the battery life provided by the BH1001.

The sound quality of the BH1001 is better than we expected given that they are in the $30 price range.  The output was clear and detailed during phone calls and more than adequate for listening to music during activity.  The BH1001 are able to get fairly loud without any distortion, which lends well to a noisy gym environment.  Given that these are earbuds and thus have the inherent limitations in sound stage capability versus larger headphones, they sound great for what they are.  The microphone picked up my voice well and was more than adequate for use during phone calls.  I got comments that it picked up my voice better than my cars built-in Bluetooth microphone, largely likely due to the proximity of the microphone to my mouth versus the high, off-center angle of my in-car unit, but still worth noting, as the ability for people to hear me clearly was improved when using the BH1001.

Bluetooth pairing was simple and we had no problems interfacing the BH1001 with the iPhone 6, Samsung Galaxy 6 Active or a Kenwood Excellon car stereo.  Sound quality was solid over Bluetooth, never cutting or dropping out.  The range of the headset wasn’t tested over an extreme distance, as that is not the scope of the product, but I was able to walk away from my Galaxy S6 Active and still have a conversation across my living room and into the kitchen, which is over twenty feet of distance.  Line of sight and other factors affect the range of Bluetooth devices, but I think the range provided here is more than adequate.

The battery life we got out of the BH1001 met the advertised rating, getting to around 7 1/2 hours of continuous playback before the battery was discharged and the headset could no longer be powered on.  We feel that this is great battery life for a device with such a small footprint, as there isn’t an area for a large, capacious battery to be installed.  Bluetooth functionality is known to drain battery quite heavily, so the BH1001 is a pretty efficient device when it comes to power draw.

With the BH1001, Intateck presents an amazing value that is hard to overlook, as they are giving users a headset with solid Bluetooth functionality and a very capable in-line remote.  Everything worked well on this stylish headset and the battery life makes it viable for use during several hours of activity.  My wife loves to work out at the gym and I was looking for the perfect headset for her needs, as she isn’t a very technical person and doesn’t like to be bothered with over-the-top features and marketing slogans, she just wants something that works and holds up.   The Inateck BH1001 is exactly that, as it is unobtrusive and provides full functionality, while remaining simple enough for a non-techie to pick it up and use it with little instruction.  It is nice to know there are companies out there like Inateck that can produce a simple, high quality Bluetooth headset that doesn’t break the bank.  There are a lot of companies charging premiums for headsets backed by heavy marketing while not besting the functionality and quality that the Inateck BH1001 provides for just $32.99 shipped at Amazon.

Legit Bottom Line:  The Inateck BH1001 is a stylish Bluetooth headset that appeals to active users and it offers amazing value.  If you’re looking for a new headset to drown out noise at the gym, definitely consider the BH1001.