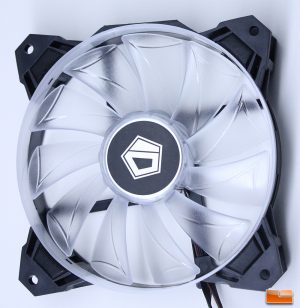 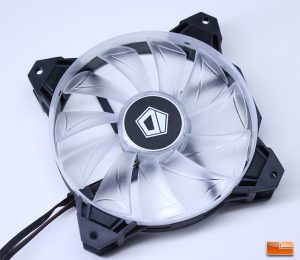 The ID-Cooling SF-12025-RGB frame has pointed edges, with the sides of the frame sucked in and circling around the fan blades, giving the fan a compact look with minimal plastic. The top half of the fan has the plastic straightened with an ID-Cooling logo present, while the rest of the fan sees the edges rounded. 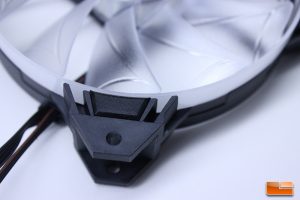 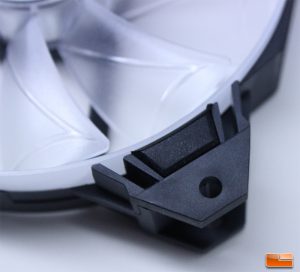 ID-Cooling has outfitted each corner of the SF-12025-RGB fans on both the front and rear with fairly substantial rubber isolation bumpers to help aid in vibration-induced noise reduction. The plastic that ID-Cooling used to construct the frame of the SF-12025-RGB fans is thin and doesn’t inspire great confidence, as the corners started to flex and crack when just a slight bit of pressure was applied during installation into my case. 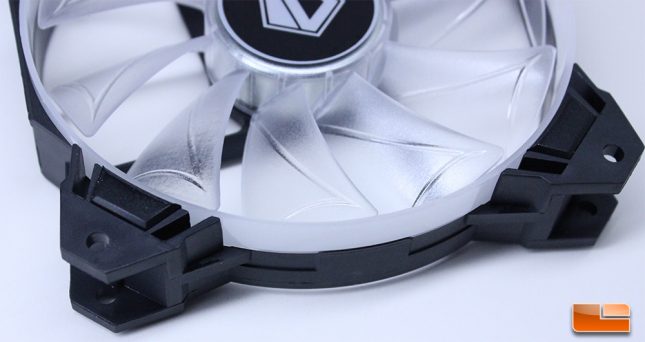 There is a piece of diffuse material to reflect the hub-mounted LED’s of the ID-Cooling SF-12025-RGB fan. This piece of plastic is really thin and when I grabbed the fan initially I found that the material easily flexed into the fan blades. Doing a little bit more poking around, I found that the plastic diffuse material easily could be pulled away from the rest of the frame. I understand that these are value fans, but this material gives me a bit of cause for concern. Thankfully, the diffuse material doesn’t have any load to support and isn’t so flimsy that it causes issues during use, but the feel of the material doesn’t inspire confidence. When considering the value aspect of the SF-12025-RGB Trio Fan Kit, the sacrifices made to material quality when compared to more expensive RGB fans are understandable. 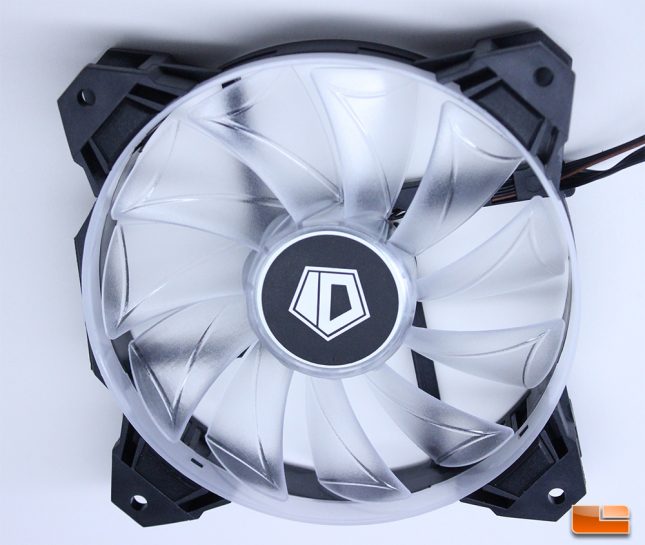 An ID-Cooling sticker is on the center of each fan hub and it is hard to tell by just looking, but this sticker isn’t mounted perfectly, so the fan hub exhibits what appears to be a bit of wobble when the fans are running. When compared to my Corsair LL and ML fans, this issue isn’t present because Corsair made sure to implement the stickers properly. Just spinning the blades of the ID-Cooling SF-12025-RGB fans, you can see quite a bit of wobble due to the sticker implementation not being perfect, in addition to any minor imperfections of the fan hub and bearing that may have already been present. 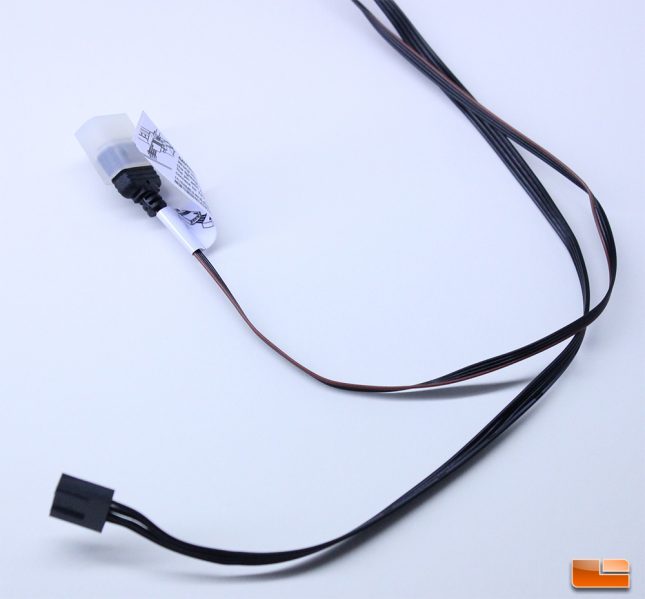 The 4-Pin PWM cable for the SF-12025-RGB fans is shy of a foot long and is covered in black sleeved cables, as is the male RGB connector, which has a sticker on it warning about orientation. The cable length of the ID-Cooling SF-12025-RGB fans should definitely be longer, as I can see placement in certain places of the case creating a wiring issue due to the short length of both cables. 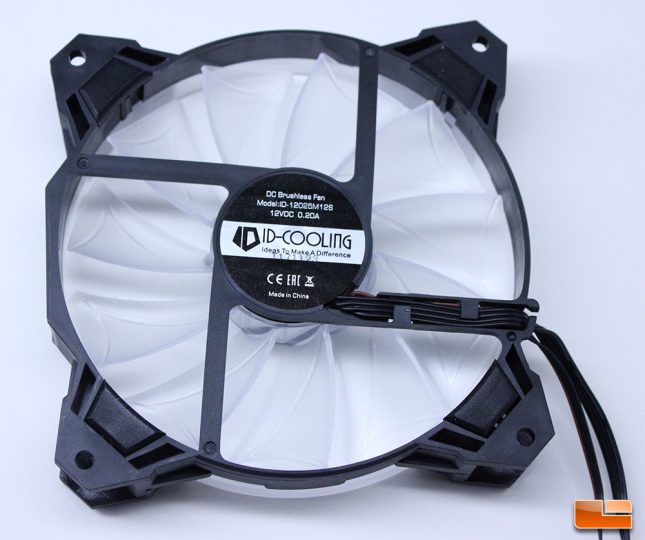 The rear of the SF-12025-RGB fans have the rubber isolation bumpers I referred to earlier and the cables come out neatly from a single channel, allowing the fan to be installed easily without the cables kinking behind it. A glimpse at the rear of the fan gives an overall idea at the build quality of the SF-12025-RGB fans, just look at the thin plastic that connects the hub to the fan frame.

The first thing I noticed when using the ID-Cooling SF-12025-RGB fans was that they were noticeably loud when they would spin at anything beyond 50% speed. With a rating of 35.2 dB, I wasn’t expecting silence, but these ID-Cooling fans were coming in well above their rated noise output at 100% RPM, with a Mini Digital Sound Level Meter reading single fan at over 65 dB when installed on the rear of my MasterCase 5 from CoolerMaster. To compare, my Corsair LL 120 series fans won’t get above 40 dB at 100% RPM, even when mounted on a radiator.

The lighting effects produced by the ID-Cooling SF-12025-RGB look very good, considering the price of the fans. The lighting isn’t totally even and there is some hot-spotting, but the fans definitely have a unique visual appeal and for entry level RGB fans in the value segment, they get the job done. The included remote allows for a variety of effects, but static colors looked best, as the fade effects weren’t totally smooth and even. 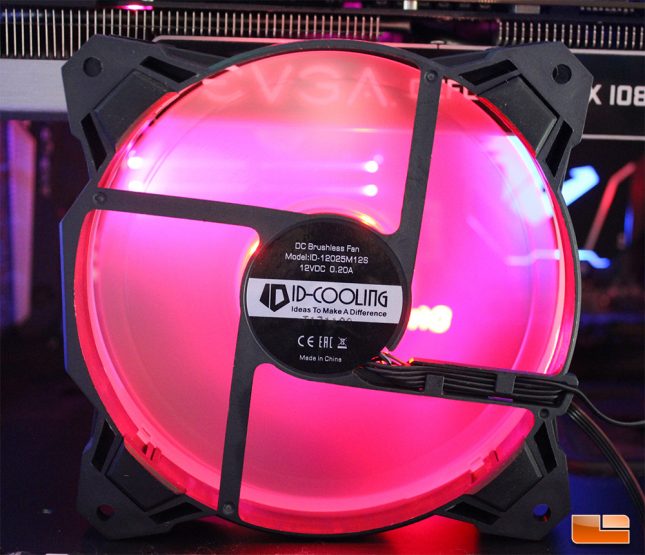 The ID-Cooling SF-12025-RGB fan looks pretty good from behind, with the colors nicely diffused on the fan blades and giving a mist-like effect. While they are capable of fading and transitioning, the four hub-mounted LED’s on the ID-Cooling SF-12025-RGB fans are linked and will always run the same color as each other, so dynamic effects that are possible on fans like the Corsair LL and ML series, like Rainbow Wave, just aren’t going to be possible on the SF-12025-RGB Trio Fan kit.

Overall, the ID-Cooling SF-12025-RGB fans are on the bottom end when considering their performance and noise level appeal, but the lighting effects are surprisingly decent, all things considered. If performance and noise level are top considerations, I would steer clear, but ID-Cooling has done a decent job with the lighting effects on these RGB fans, saving them from falling into a complete abyss of mediocrity. Let’s wrap up this review on the next page and see how the ID-Cooling fans stack up to the competition.