The tight aluminum frame of the HyperX Alloy Origins Core evokes a feeling of quality. Not that you’d want to, but you get the feeling that the Alloy Origins Core could survive being tossed across the room and definitely will withstand some caffeine fueled rage quits. Looking beneath the key caps, we see a few of the frame screws, but that is to expected.

The last keyboard I reviewed had a plastic frame while the HyperX Alloy Origins Core features a very lightweight yet durable aluminum body. The difference in feeling between the plastic body keyboards and this HyperX unit is quite remarkable, as the HyperX feels a lot more sturdy and well-built because of this material choice.

HyperX has done a decent amount of branding on the frontside of Alloy Origins Core, with a HyperX spacebar and a black HyperX logo above the arrow keys. Situated to the right of the logo are two status LED’s, very subtly placed. 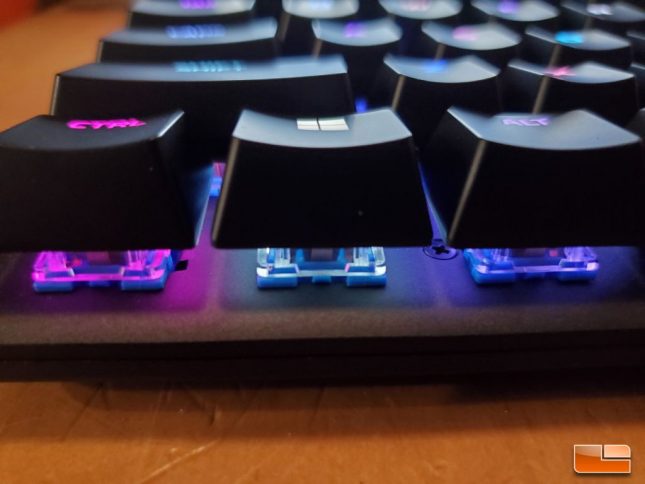 HyperX mounts their switches directly on the top plate, rather than doing an inlay. This switch mounting style allows for vivid RGB lighting, as the HyperX switches have clear housing. The LED sits on top of the switch in a translucent housing. HyperX have designed their switches to allow maximum lighting to show through, as the entire casing is clear. The HyperX switches of course include MX-compatible stems. Other manufacturers that once tried to produce key caps without MX-standard stems (Logitech) have moved on to producing their switches with MX stems, as the MX standard is tried, true and what the industry is settled on. Ever try replacing a key cap on a Logitech Romer-G key cap? Yikes. 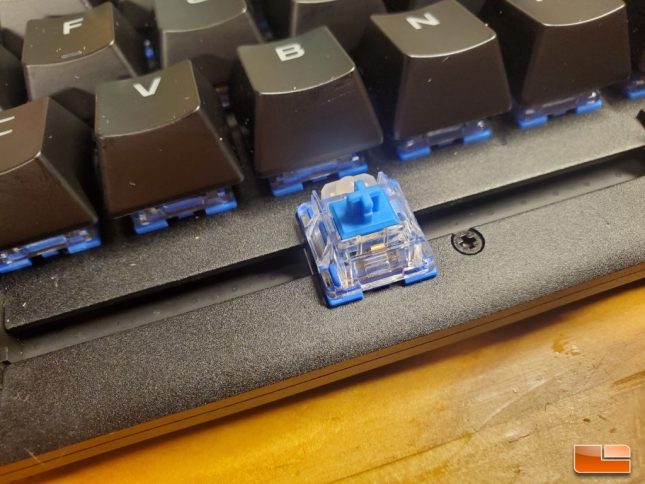 HyperX Blue switches offer 1.8MM of total travel distance and compared to their Cherry MX counterpart, they require less actuation force and have a faster actuation point. These switches are also rated for 80 Million clicks. 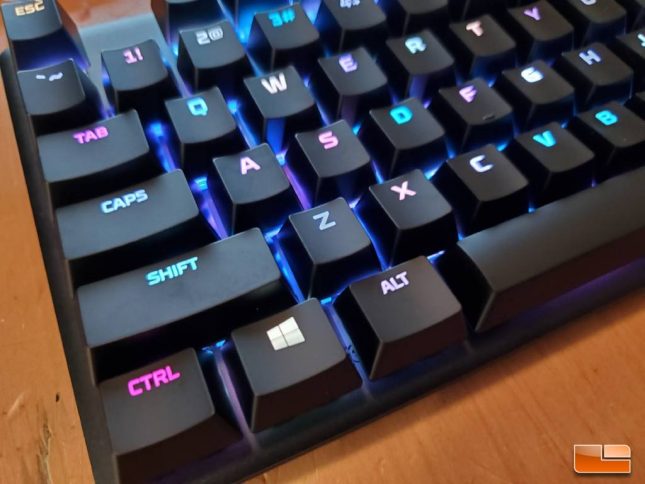 ABS keycaps come on the Alloy Origins Core Gaming Keyboard. Just after a little bit of handling and use, the key caps on the Alloy Origins Core were looking a bit shiny. These caps are of decent quality and I don’t expect them to cause any issues, but they definitely show deficiencies compared to the PBT keycaps that I’ve had shipped on other boards. Thankfully, HyperX and other companies have excellent PBT key caps available that can be used to replace the stock caps. HyperX’s own Pudding keycaps complement the Alloy Origins Core and it’s exposed switch design well, as the translucent sides of the caps really allow RGB lighting to shine through. 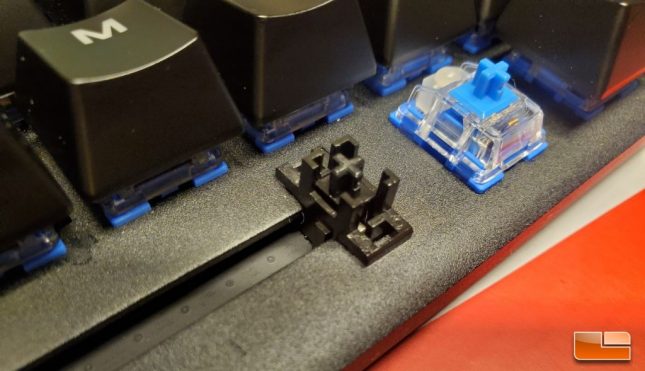 The RGB lighting of the HyperX Alloy Origins Core is vivid, clean and smooth. The aluminum backplate doesn’t complement the RGB as well as a white backplate does, but the exposed switch design really lends to bright lighting that cascades from under the switches. The key caps also do a good job of allowing lighting through the legends, though there are a few caps where holidays are noticeable in the legends. Notice how the blue LED is centered and raised on the key switch, as HyperX has designed these switches for optimal RGB lighting. 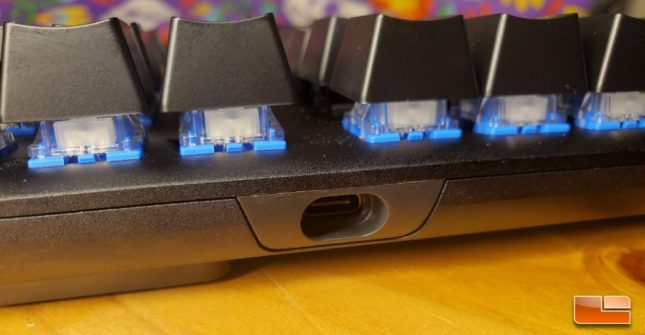 In 2021, it’s USB-C or bust. HyperX got the memo and includes a detachable braided USB-C cable that comes in just shy of six feet in length. The Alloy Origins Core runs at a 1,000HZ polling rate by default and this can’t be adjusted, though that shouldn’t be an issue for most people Unfortunately, HyperX did something questionable and put the USB-C connection on the right side of the keyboard. Connection coming from the middle? No problem. On the left side? All good. The right side isn’t optimal for many users because if they angle the keyboard right, it puts the cable facing sideways where their mouse will be. This is obviously only an issue with specific orientations and not every user will be affected, but a cable coming from the center or left side of the chassis makes more sense, since most people are right handed.

Just like the top, the underside of the HyperX Alloy Origins Core is surrounded by a solid aluminum body. HyperX has included adjustable feet with three degrees of adjustment available, something that was missing from the last keyboard I reviewed. The rubber feet and adjustment tabs on the HyperX Alloy Origins Core felt very solid and kept the keyboard stable on my desk, without any wobble or movement to be felt or seen.

To get full function of your HyperX Alloy Origins Core, you will need to download ngenuity from the Microsoft Store. I am not a fan of this method of acquiring software, but that’s what HyperX has decided to do. Without the ngenuity software, you can actually still toggle through all of the preprogrammed lighting effects and get basic function. ngenuity really lets you customize things a lot more, as per-key RGB lighting, the ability to stack effects and more are available. 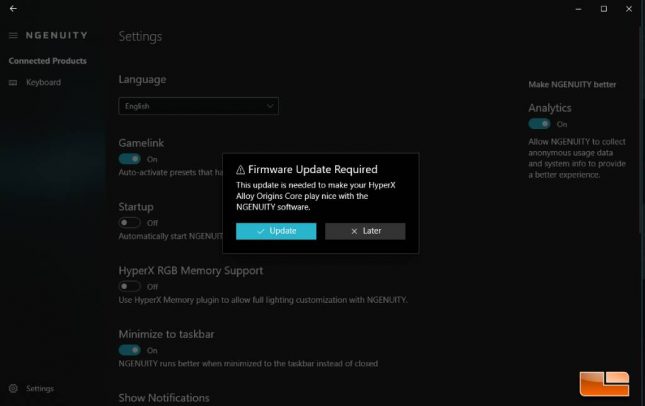 Prior to using ngenuity, I was prompted to update the firmware. This process went smoothly, without issue. 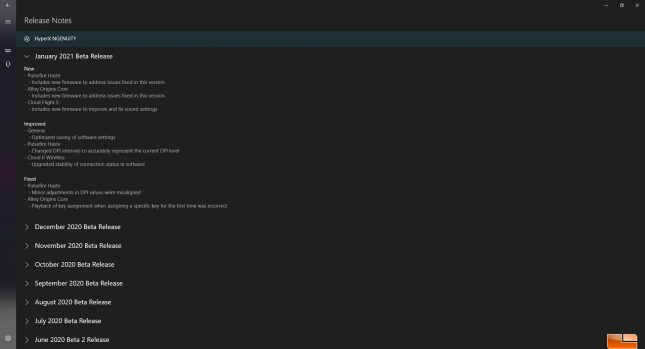 The latest version of ngenuity was stable and also improved the sound quality on my HyperX Cloud Flight S, a welcome improvement. I didn’t notice any excessive CPU usage or other notable issues with ngenuity. I also that the release notes included fixes for the Alloy Origins Core. This is my first go with this keyboard, so I can’t be sure exactly which issues were fixed. My units appears to be flawless out of the box in regards to performance and stability. 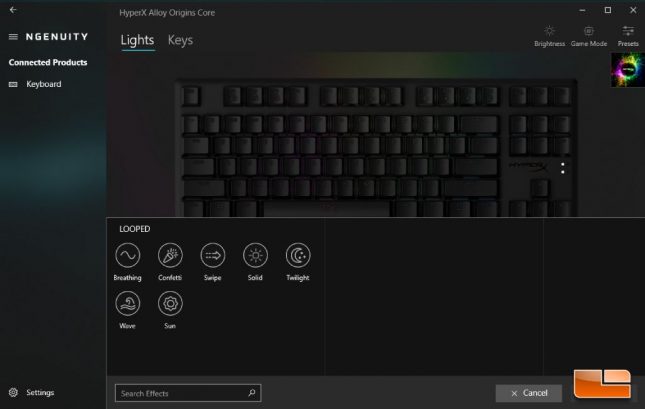 There are only a few preconfigured dynamic lighting modes for the Alloy Origins Core, but the includes effects are pretty nice and offer smooth transitions. Effects can be layered, programmed to individual keys and have different opacity settings, to allow for pretty dynamic effects. The lighting profile can be saved to the keyboard so that the lighting effects don’t disappear when using the keyboard on a PC without ngenuity. 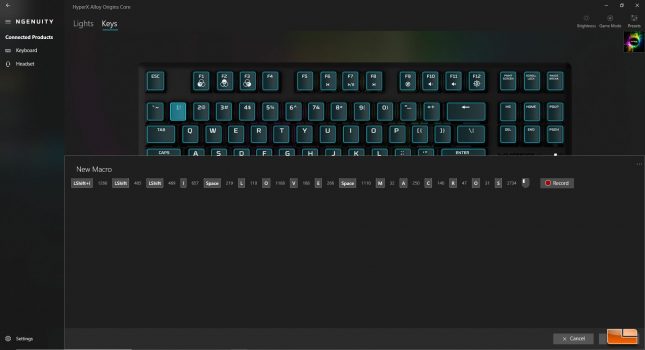 The macro section of the ngenuity software is pretty extensive, yet very straightforward. You can program any of the keys on the keyboard to a different keystroke, set it to launch specific programs, or record a macro. Macro recording allows for multiple key presses to be recorded and then recalled with a single button, which can come in very handy. As with RGB settings, once you’ve configured your macros, they can be saved to the keyboards memory so that ngenuity isn’t required to recall them. This is very nice because you can use the keyboards macro and lighting functions without taking any resource hit if you want to shut off your ngenuity software while gaming.

Overall, the ngeunity software goes great with the Alloy Origins Core and was very straightforward to use. I just wish I didn’t have to get it through Microsoft.

Typing and gaming on the Alloy Origins Core both was great. I don’t normally like clicky switches, but the HyperX Blue’s are smooth, tactile and the click is present without being grating. Since the HyperX switches don’t require as much actuation force as typical Blue switches, the HyperX switches lend better to gaming, without being so sensitive that you’ll experience key presses registering from leaving your fingers lightly on top of the keys. HyperX really did a great job here, as their Blue switches actuate smoothly and have a great tactile feedback paired with a satisfying click. Ive now tried all three HyperX switches. They are all winners. If I can throw HyperX a suggestion that they come with a linear switch to compete with the MX Silver/Speed, I have a feeling I’d be really happy with something like that.

Gaming was excellent with the Alloy Origins Core, as the tactile nature of the switches and stability of the keyboard really let me just focus on the game and not worry about anything. Adjustment time to the Alloy Origins Core was really fast coming over from my MX Silver based keyboard. Overall, this was about as good an experience as I could hope for, especially given the fact this is a value offering from HyperX. 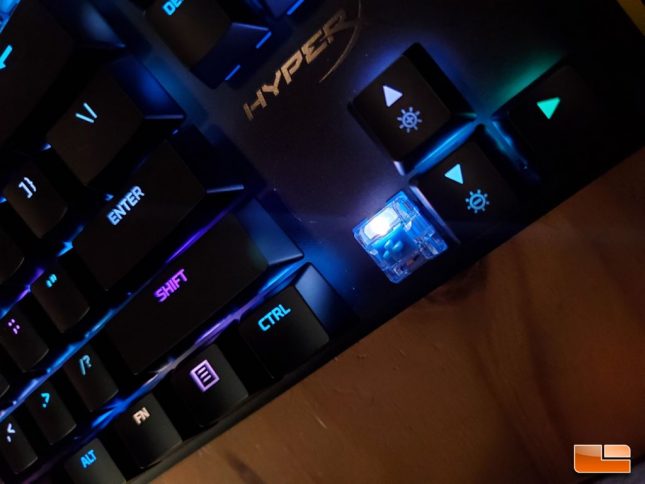 My only negative experience was that you have to use HyperX ngenuity software to control lighting modes and macros on the Alloy Origins Core. The included lighting modes are a bit light, as there are only a few, though there are some beautiful presets. The ngenuity software is only available on the Windows Store and is still in beta mode. It’s been improving over time, but I really dislike the idea of having to get software for my HyperX peripherals in beta mode from the Microsoft Store. Hopefully HyperX rethinks this strategy for the distribution of their software and continue to improve ngenuity software.

Let’s conclude this review on the next page and see how the HyperX Alloy Origin stacks up.