Things have been rather quiet over at AMD when it comes to motherboard chipsets and platform changes as they haven’t needed to update anything since no new processors or technologies have really come out in the past year or two. It is hard to imagine that the AMD 790FX and 790GX chipsets have been out for nearly two years now, but they have proven to be solid platforms for AMD users and didn’t really need a change. That was the case up until today.

AMD is getting ready to come out with the Phenom II X6 six-core processor
and they have gone ahead and done a platform refresh of sorts that
enhances support for future product and also brings new mainstream
features to the market. The result of this is the introduction of ATI
Radeon HD 4290 Graphics with the AMD 890GX chipset and a brand new
southbridge called the SB850. The new SB850 southbridge is actually one
of the more exciting features this time around as it is the first
chipset on the market that natively supports SATA 6Gbps Solid-State
Drives (SSDs) and Hard Drives (HDDs). 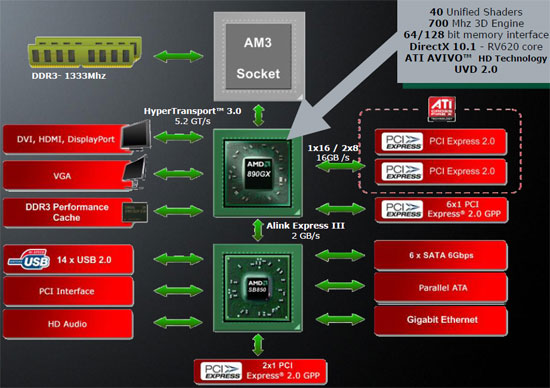 Before we take a look at our review sample we should take a closer look at the AMD 890GX chipset and talk about the general features. Pictured above is the block diagram for the AMD 890GX/SB850 platform for AMD Socket AM3 processors. This platform will support all Socket AM3 processors, even the upcoming Phenom II X6 six-core processors that will be out in Q2 2010. The integrated graphics got a huge boost in their feature set as they support DirectX 10.1 graphics. The new IGP is called the Radeon HD 4290 and it operates with a 700MHz core clock on the 40 shader units. The AMD 785G chipset operates at 500MHz, so this is a nice boost in IGP clock speeds. The AMD 890GX motherboard with the integrated ATI Radeon HD 4290 Graphics can be run in Hybrid CrossFire mode with the ATI Radeon HD 5450 Graphics for a dual-graphics performance for those that need a little more graphics muscle. AMD’s 890GX chipset features 22 PCI Express Gen 2 lanes, which means it will be able to connect to numerous devices. Speaking of which, the SB850 southbridge features native support for SATA 6Gb/s storage devices! This is a first in the industry and something Intel will not come out with until sometime in 2011. One feature that is lacking from the chipset is USB 3.0 and that will be handled by a NEC SuperSpeed USB 3.0 controller that is connected by a PCIe 2.0 lane to the chipset. 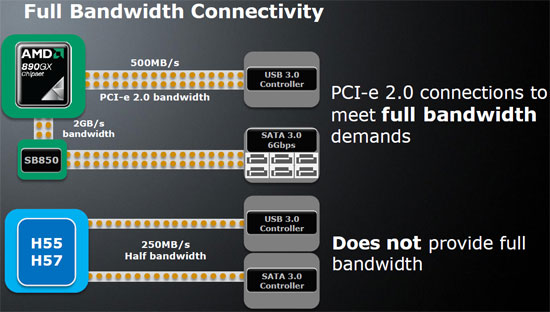 The implementation of the PCIe 2.0 is unique as they feature 1 GB/sec of bidirectional data (500 MB/sec upstream + downstream). This should be able to handle the theoretical 480 MB/sec of bandwidth USB 3.0 supports and requires no ‘bridge’ chips that are common on some of the Intel P55 boards. This means that AMD delivers full bandwidth for SATA 3.0 6Gbps and USB 3.0 devices, which is something that no other platform can with direct connection like this. 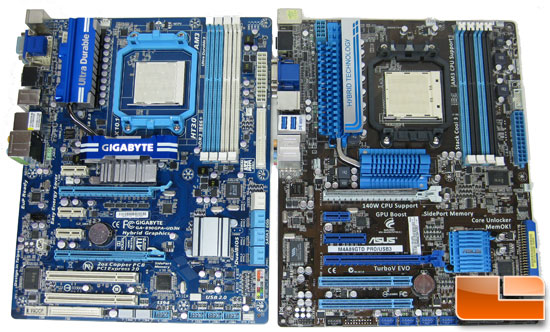