Before we do any testing we just want to make sure that you understand that the Gelid Rev. 2 Tranquillo is designed for silent PC use and isn’t really what you would consider an overclockers CPU Cooler. We contacted Gelid and directly asked them who they recommend this cooler to and they had the following statement.

The Rev. 2 Tranquillo is designed for silent enthusiasts who do not have a big budget and will not be overclocking their system. – Gelid Marketing Taiwan

That being said we will be testing it on an Intel Core i7-930 processor at stock and overclocked speeds. Your focus should be at the stock speeds as that is what the cooler is designed for. We’ll be looking at overclocking performance as well, but we don’t expect it to do well as it clearly is not designed for this purpose. 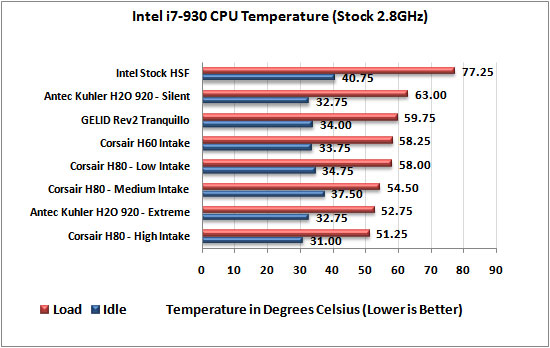 With the system running at stock settings the GELID Rev2 Tranquillo proved itself to offer a very solid improvement over the stock Intel HSF. Coming in at 59.75*C the Rev2 Tranquillo is a very nice 17.5 degrees Celsius cooler than stock. Not only was it cooler than stock, but we also found it to be quieter than the stock Intel HSF that comes with retail boxed processors. Even at load speeds the GELID Rev. 2 Tranquillo was within a degree of the Corsair H60 and was actually running lower temperatures at load than the Antec Kuhler 920 (running on silent) water cooler that costs nearly three times the price! 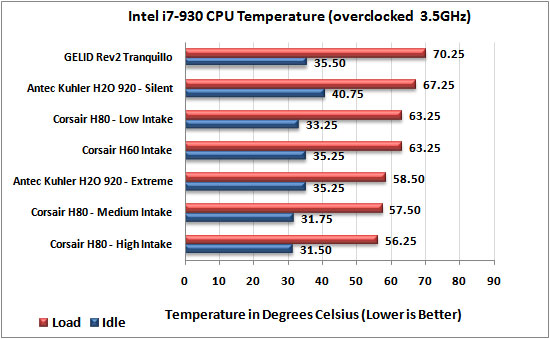 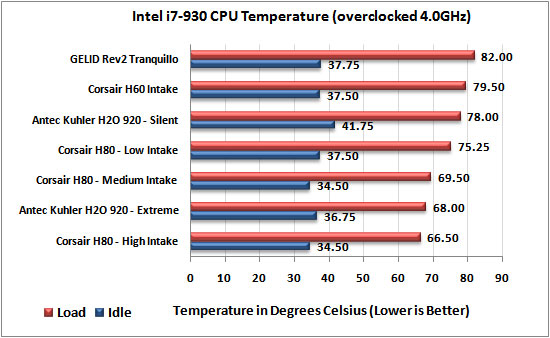 Really pushing the system now at 4Ghz the Rev2 Tranquillo come in at 82*C. With the low RPM, low CFM fan that the Rev2 Tranquillo has I think that has something to do with the temps. You could swap the fan for something will a little higher CFM rating, but noise will go up and that defeats the purpose of buying a “silent” cooler to begin with. We must say that we are a little impressed here that we could hit 4GHz on a HSF that the manufacturer says not to overclock with.  The GELID Rev. 2 Tranquillo has proved itself to be a rather versatile CPU Cooler!