Finally A Case For Those That Abuse Their Treo Cell Phones

Ill be honest with you, when it comes to cell phones I have a tendency to break them. Not all of them though, just the really expensive bulky ones that always find a way to slip out of my hand or pocket during my time off work. When I’m not benchmarking hardware or writing reviews I’m out of the cubical and out and about enjoying life and this is where technology can’t keep up with me. The Treo 680p that I bought this past January was to replace my Treo 650p that I broke while skiing this past winter as I didn’t have insurance on my phone and the damage obviously wasn’t covered by the factory warranty. Any Treo owner knows that replacement costs is hundreds of dollars, so breaks like this put a dent in the check book. If only there was a way to protect your phone when your not at the office!

I was first introduced to the company called OtterBox this past January at the Consumer Electronics Show as they gave out small water proof cases as part of their marketing kit. At the time I just got a Treo 680p and when I inquired about a case for my phone after telling them all the crazy stories on how I broke several of the older Treo 650p phones they laughed and said that none were available. Half a year later it seems that they have finally developed a case for late model Treo users! The case I will be showing off today is an improved version of the previous 1920 case and has been designed to fit the thinner, antenna-less Treos such as the 680, 750 and 755p. 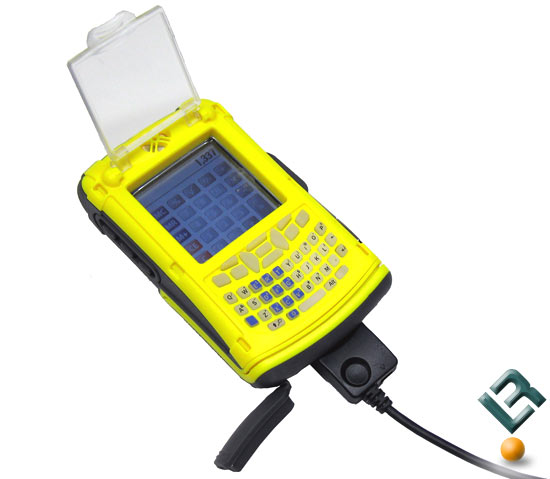 Pictured above is the OtterBox 1921 with my Treo 650 installed inside. If you’ve seen a Treo before you know they are not small and neither is this case. The dimensions of the OtterBox 1921 are 5.1″ (130 mm) in length with 3″ (76 mm) in width and a thickness of 1.9″ (48 mm). Due to the size of the phone the OtterBox 1921 weighs ~.6 lb (.27 kg) without the Treo inserted! It’s a tank, but remember it is designed to protect the phone! The flip-up polycarbonate screen cover offers scratch protection, but when raised there is a flexible membrane beneath to allow use of the touchscreen. At the bottom of the case there is a removable rubber ‘plug’ on the bottom that allows access to the headphone and HotSync jacks on the bottom of the device, which makes for easy updating and charging. 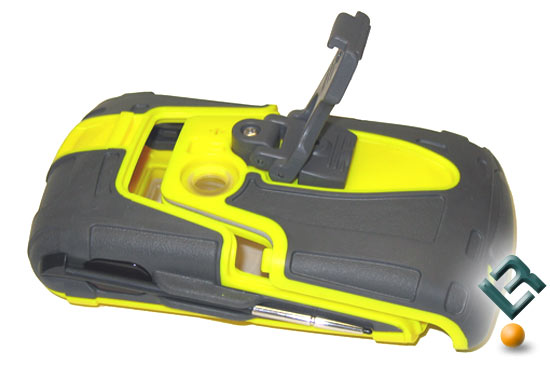 To open the OtterBox 1921, simply lift up on a latch on the back half of the OtterBox and slide the two-piece case apart. Then you slide the Treo in from the back and fit the two halves together. After the latch is closed your Treo is ready for abuse! Notice that there is an outside holder for the stylus, which is nice, but far from secure. This is also the side where the SD memory card is inserted into the phone, so when the case is used one can’t access the SD slot. While the Treo 680 we tested doesn’t have IR there is a window on the Otterbox 1921 for those models that do. 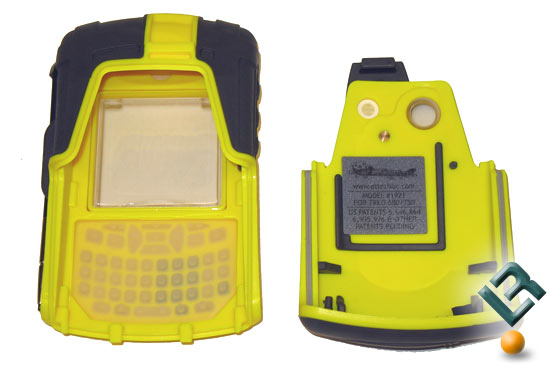 Inside the OtterBox 1921 there isn’t much going on, but if you look closely you can make out the rubber seal that goes between the two halves. The clear window on the base is for the camera and it didn’t make a major impact on the quality of the pictures. As all Treo users know image quality of their pictures have never been good, so no big deal there. The entire device is water tight to a certain depth, but keep in mind that the OtterBox 1921 is not intended for underwater use.