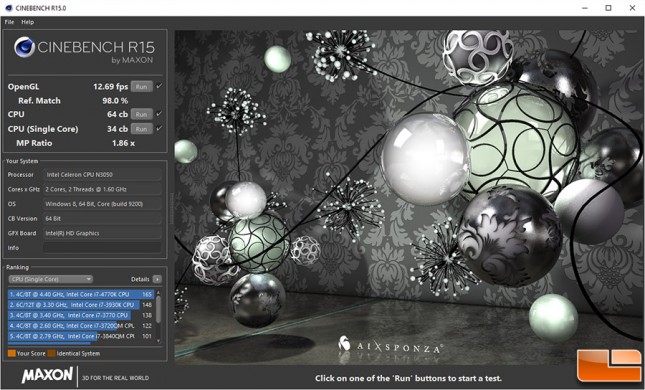 In Cinebench R15 we found the ECS LIVA X2 with the Intel Celeron N3050 processor scored 12.69 FPS on the OpenGL benchmark and then 64 points on the multi-core CPU test and 37 points on the single CPU test.

When we reviewed last years ECS LIVA X with the Intel Celeron 2808 processor it scored 6.21 FPS on the OpenGL benchmark and then 66 points on the multi-core CPU test, so there is a big performance jump on the integrated graphics, but the CPU performance is pretty flat. 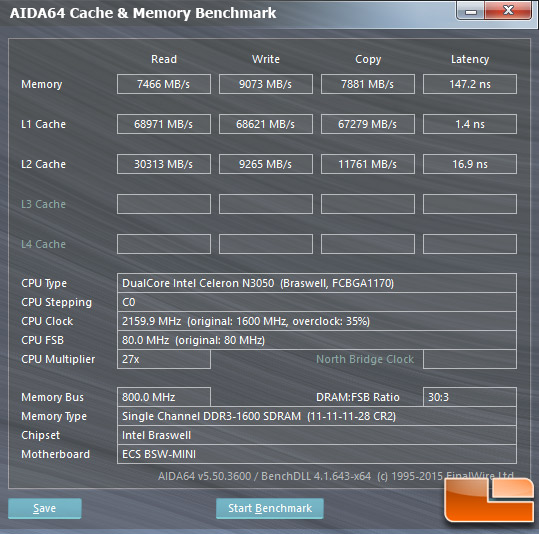 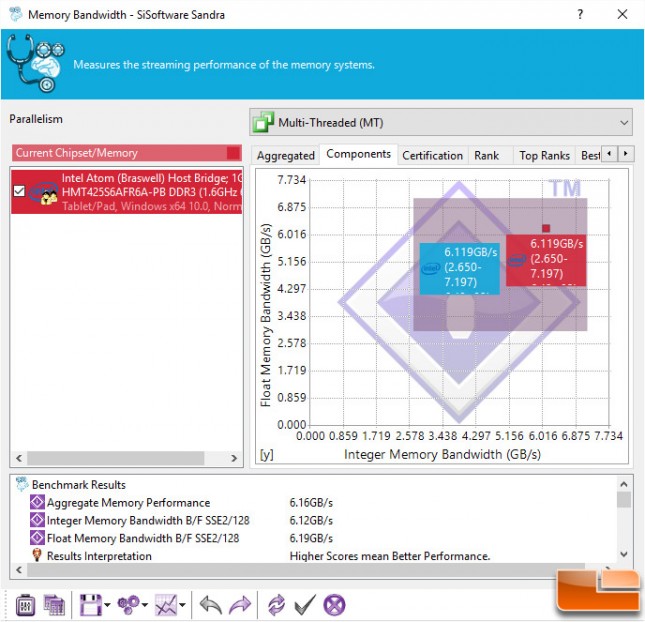 A quick look at the memory performance in SiSoftware Sandra 2016 showed 6.2 GB/s of bandwidth on the single channel DDR3 memory solution running at 1600MHz with CL11 timings. 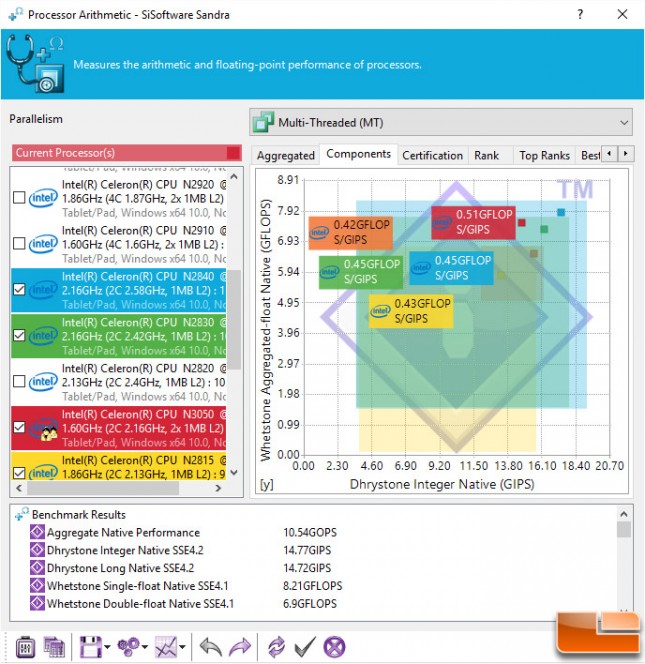 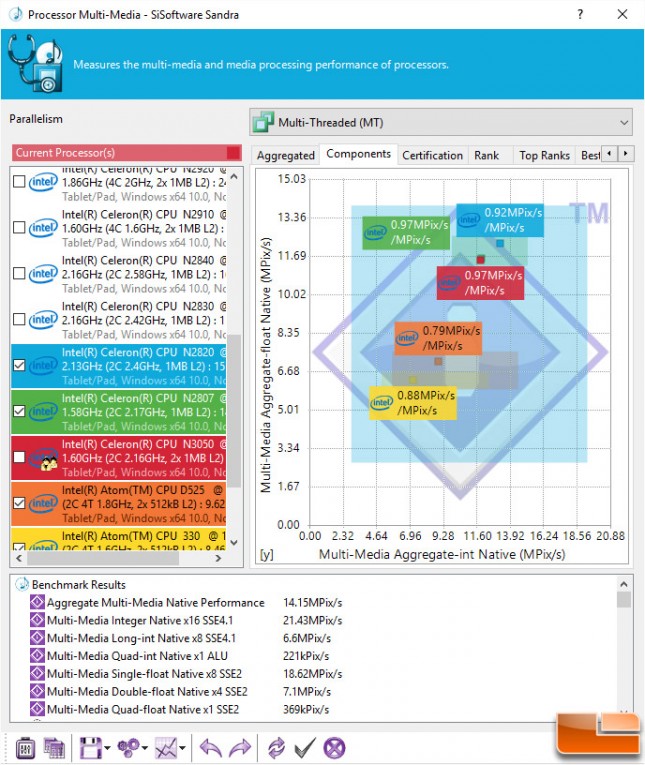 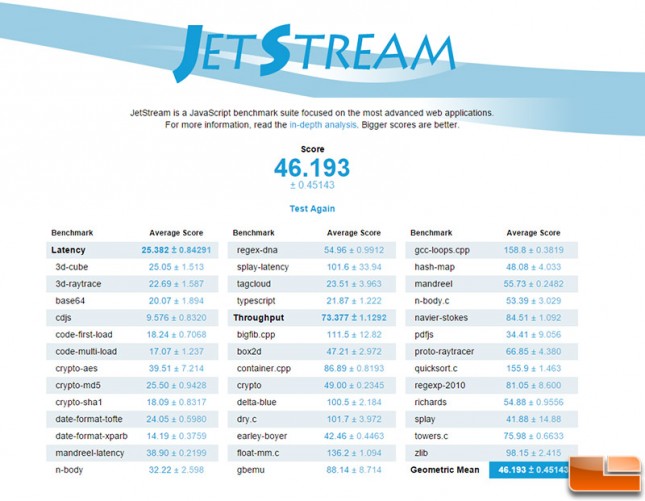 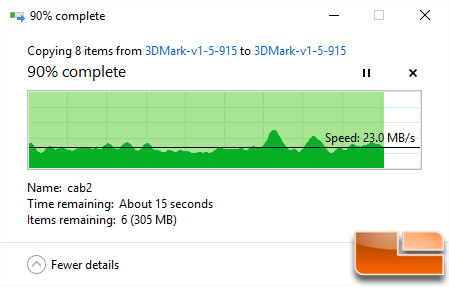 When unzipping a folder (3DMark) we found speeds of up to 35MB/s on the ECS LIVA X2, but the average unzipping speed was more in the 20-25 MB/s range. 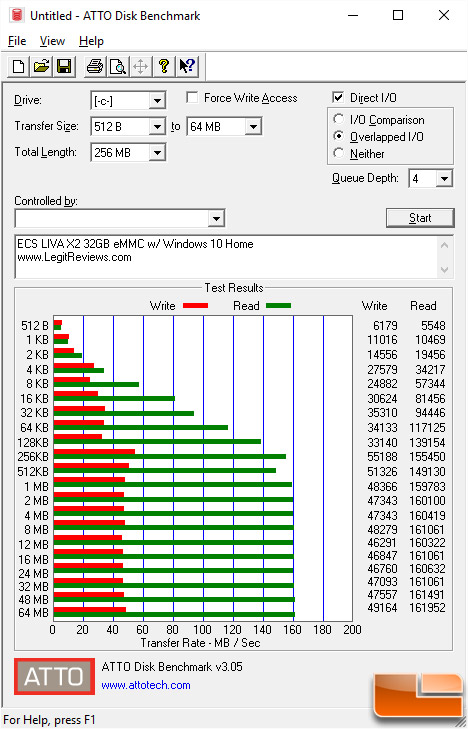 ATTO showed that we were getting up to 162MB/s read and 55MB/s write on the internal 32GB eMMC drive. 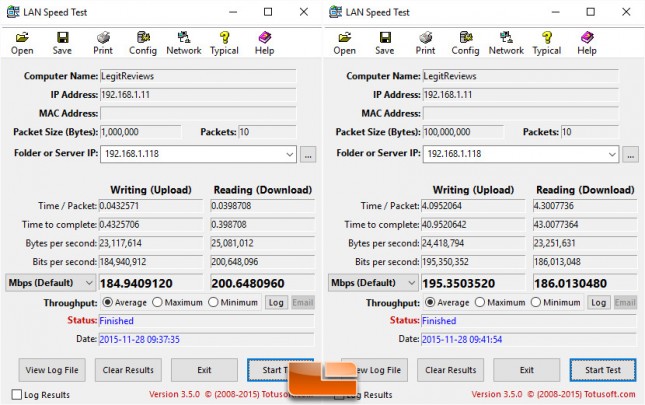 When it comes to wireless performance the we used LAN Speed Test to check the performance of the included the included Realtek 8821AE Wireless LAN 802.11ac PCIe solution. This is a dual-band 1×1 802.11ac Wi-Fi card with a theoretical peak speed rating of 433 Mbps. We used a desktop with Gigabit Ethernet to run LAN Speed Server that was hard connected to the ASUS RT-AC68U 802.11AC wireless router with Firmware version 3.0.0.4.378.9313. We tested the 5GHz performance with the router placed 10-feet away from the ECS LIVA X2 and ran performance tests on both 1MB and 100MB packet sizes. When we ran LAN Speed Test on the ECS LIVA X2 the wireless throughput averaged 191 Mbps (roughly 24 MB/s) on all the tests.  We couldn’t get near the advertised 433 Mbps theoretical speeds and we were using the latest drivers, UEFI build for the LIVA X2 and firmware on the wireless router. We even 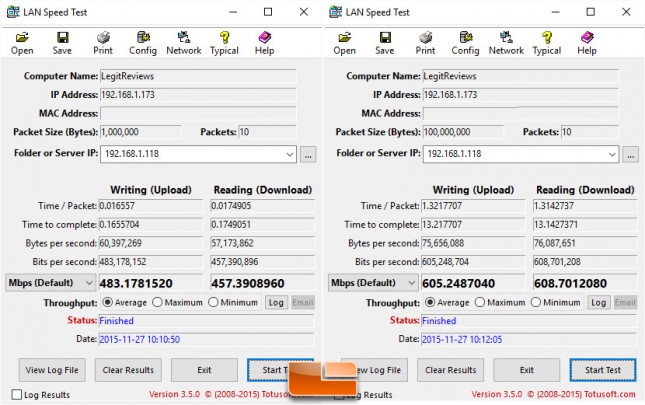 On the wired Realtek Gigabute PCIe NIC we were getting ~470 Mbps (58.75 MB/s) speeds on average with 1MB packet sizes and ~607 Mbps (75.86MB/s) speeds on the 100MB packet size. This is well below the theoretical 1000 Mbps that one would expect to see on a Gigabit network, but it’s not that bad for a budget device as it’s ‘fast enough’ for most folks. 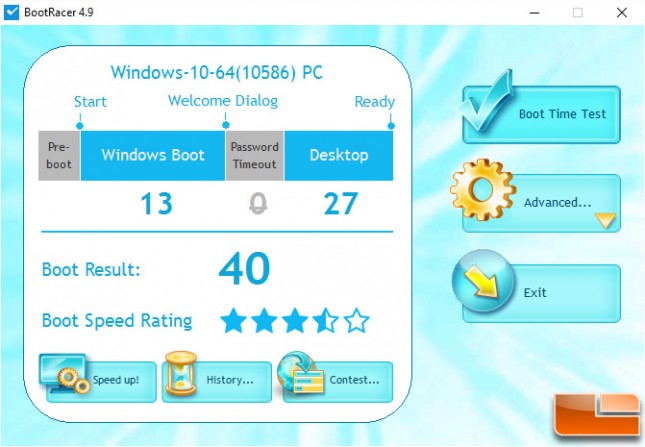 The last performance test that we wanted to run was Bootracer 4.9 to see how fast the system is able to boot Windows 1o Home 64-bit. We found that the ECS LIVA X2 32GB takes 13 seconds to get to the logon screen and it took a total of 40 seconds to get up and running on the desktop! This is over 10 seconds slower than the Liva X running Windows 8.1, so we are a bit dissapointed with the boot times we are seeing on the Liva X2 with the 32GB drive.

Let’s take a look at power consumption and CPU temperatures on the ECS LIVA X2.