ECS Elitegroup has been having some pretty good success in the market with their LIVA and LIVA X mini PC kits since they debuted in 2014. ECS is showing off some upcoming products at CeBIT 2015 and we have learned that they are showing off two LIVA Mini PC prototypes that are powered by the latest Intel SoCs.  The two models on display at CeBIT 2015 are the ECS Liva Core that uses 14nm Intel Core M ‘Broadwell’ processors and then there is the more cost effective ECS LIVA X2 that utilizes Intel Braswell-M SoC solutions. ECS hasn’t announced the model numbers of the processors they are using just yet since these products won’t be out for a number of months and it’s very easy to change processors at the last minute thanks to the BGA design of boards being used in these systems. 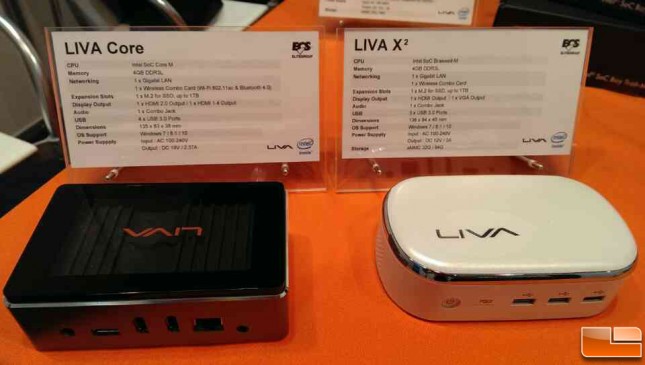 By moving over to the new Intel Core M processor, ECS was able to reduce the size of the enclosures by 14% smaller size. Other big changes would be the inclusion of the M.2 storage drive interface with support for the ability to upgrade the integrated storage up to 1TB for those that need more storage space. You also have a faster Wi-Fi solutions being used and it appears that 4GB of DDR3L memory is now standard.

The ECS LIVA Core will be likely they model we’ll be reviewing later this year and it features four SuperSpeed USB 3.0 ports, Gigabit Ethernet, 802.11ac WiFi combo card with Bluetooth 4.0 support, 4GB of DDR3L RAM, and an M.2 SSD slot with support for up to 1TB of storage. The ECS LIVA Core measures just 5.3″ x 3.3″ x 1.5″ and will support Windows 7, 8.1 and 10. The only thing missing that we would want in Q3 2015 and beyond is support for USB 3.1, but Intel doesn’t offer support for that in their current SoC procesor designs. We know ECS needs to keep build costs down on these PCs to be competitive and that they didn’t want to add a third party controller due to costs and PCB space.

ECS expects both of these models to be released in June during Computex 2015 and pricing and regional availability will be given at that time.