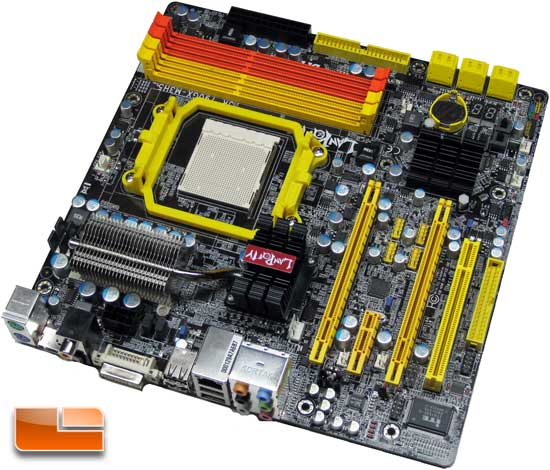 I would have to say that I was pretty excited to get my hands on a DFI motherboard.  It has been awhile since I have had the opportunity to look at one, so I was eager to see how the DFI LanParty Jr 790GX-M3H5 motherboard would stack up against some of the others we have tested.  Unfortunately, I was a little disappointed, and here is why…

The performance of the board was very good.  It kept up with all the other boards tested, and did it while running at 2T timings.

The bundle was not what I expected from a LanParty series board, but I guess the “Jr” moniker may have something to do with that.

The layout of the board was just ok.  The placement of the 8-pin 12v connector and the closeness of the CPU socket to the northbridge heatsink are two issues that the end user may have to deal with.  Certainly, over-size heatsinks will NOT fit very well on this board.

Overclocking of the board was horrible!  We expected to see better results for sure.  The inability to get any higher HTT once I lowered the CPU multiplier was an obvious indicator that the board is NOT an overclocker’s board.

Pricing of the board was also a shocker as it is the most expensive AMD 790GX chipset based board out of the 37 brands and models listed.  As of this writing, you can find the board for right at $135.99, which seems a bit expensive for reasons stated above.  Just to put it into perspective, the cheapest 790GX mATX motherboard is the BIOSTAR TA790GXB at $79.99 after rebate. The Gigabyte GA-MA770T-UD3P ATX motherboard that we looked at a couple of weeks go performed just as well as this board, overclocked better,  and is also just $79.99 plus shipping without any rebates. You can do the math and come up with your own conclusion there!

I know this board is more geared toward an HTPC build than anything else, but I am left wondering why it costs as much as it does, and why an HTPC board would have the LanParty name.  When I think LanParty, I think total enthusiast… maybe I am the only one? To be the most expensive you need some features or insane performance that justifies the price. This board is solid, but can’t back why it is the most expensive board on the market right now.

Legit Bottom Line: As much as I had hoped for a great board, the only thing that was great about the DFI LanParty Jr 790GX-M3H5 motherboard was my disappointment.  It just is NOT worth the price they are asking!