AIO Liquid Coolers are well known for how easy they are to install.  Once you have selected the location for your AIO Liquid Cooler, it’s simply a matter of attaching the fans, the radiator to the case, and finally connecting up the pump. The pump installation might be the most difficult on the DeepCool Castle 240R, as you might have to hold the backplate in place, while putting the pump into position and using the screw caps to secure it.  Routing the power and RGB cables on the Castle 240R is easy, each of the two cables are long enough to get to the back side of the motherboard tray, and using the two included extension cables, you shouldn’t have any issue. 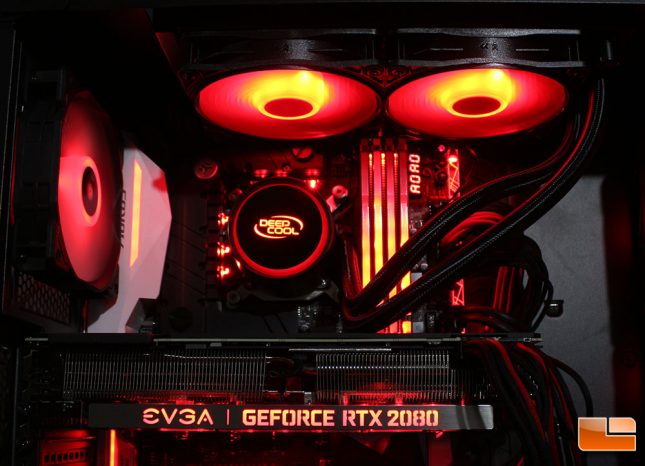 DeepCool has done something a little different with their logo on the pump.  If you remember the plastic cover on it, there was a double sided arrow.  If you weren’t already aware, DeepCool recognizes that the pump can be installed in different orientations.  So rather than having the logo be in an awkward position, the center piece can be rotated.  While this is a small thing, it does show attention to detail. 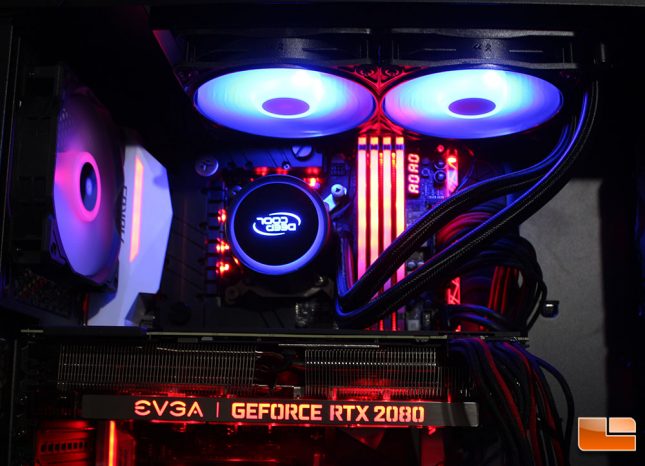 To gauge how well the DeepCool Castle 240R cools a system, we compared it to a Corsair H100i V2, and a DeepCool Captain 240 (that has been in constant use for over 6 years).  All testing is done with a 19C ambient room temperature.  We will be using a test system build around an Intel i7-7700K and a Gigabyte Aorus Z270X Gaming 9 motherboard overclocked to 4.5GHz.  Testing is conducted using AIDA64 Stress Test for 20 minutes, and then we averaged the four core temperatures. 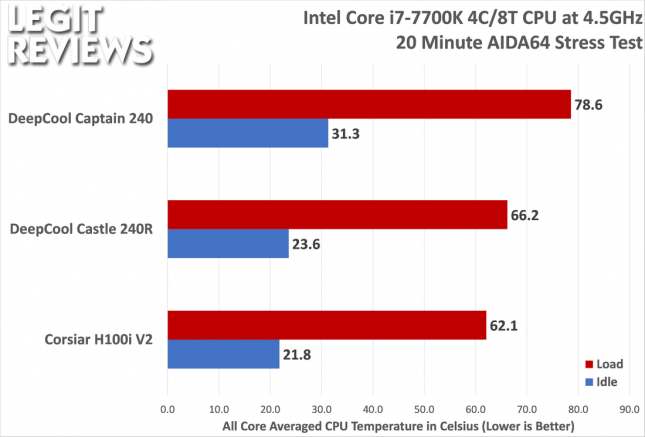 Between the two recent coolers the DeepCool Castle 240R was 1.8C warmer than the Corsair H100i V2 at idle speeds, and 4.1C warmer under a full load so close to a 6.6% difference in load temperatures.  While AIO coolers do lose some cooling capabilities over time, we did see a good difference in temperatures between a new DeepCool Castle 240R and a DeepCool Captain 240, which has been running full time since December 2014.  While the Captain 240 has been reliable, we can appreciate the cooler temperatures that a new AIO Liquid Cooler can provide.

Overall, the DeepCool 240R performs well, the RGB LEDs are bright and vibrant.  The RGB LEDs are compatible with most of the current motherboard RGB options.  The attention to detail with the rotating DeepCool logo on the pump is nice for those that install the pump in a different orientation.  The Anti-Leak technology used in the hoses and the radiator should provided some added assurance that your system won’t get ruined by a leak.

Overall, if you are building a system on a budget, the DeepCool Castle 240R will be a great option to help keep the price down.  However, as it usually goes, if you have the budget, and you’re looking for the best performance there are more expensive AIO coolers out there.

Legit Bottom Line:  For $79.99 you are getting a good AIO liquid cooler with RGB that should last for years and will keep your system cool during intensive gaming sessions.